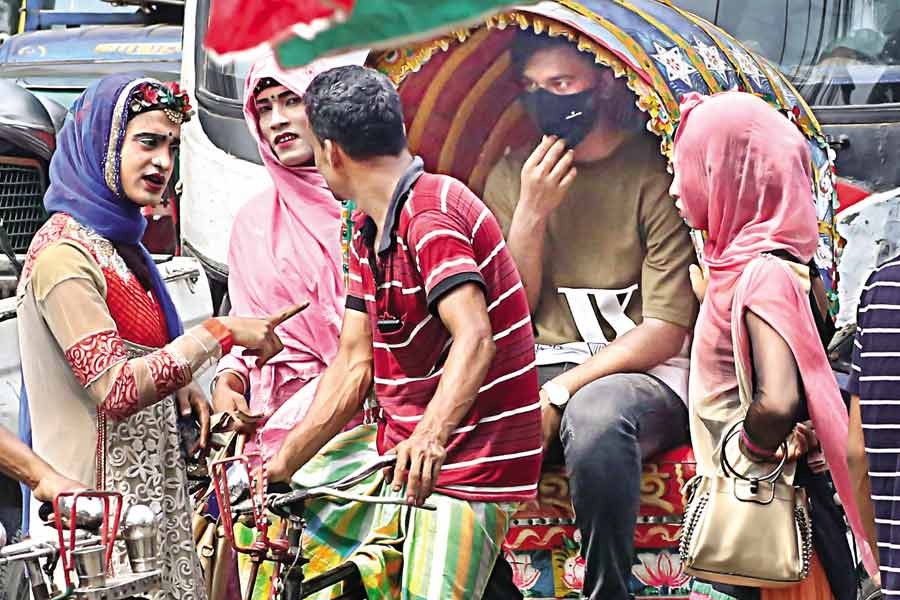 When an elderly relative passed away, Sanjibani Sudha, a 26-year-old banker, was not permitted by her family to attend the funeral because she is a transgender woman.

Shimu Sheikh, 21, who was assigned female at birth but now identifies as a man, said that when seeking work, he was asked by human resources about his gender.

"When I said I am a human being, it was not good enough for them to give me a job," he said.

As a result, these groups are especially vulnerable to shocks such as the COVID-19 pandemic and extreme weather fuelled by climate change, including the devastating floods that have hit the northeast this month.

In January 2014 - in a first for the conservative Muslim-majority South Asian nation of 165 million - the Bangladesh government attempted to integrate trans people into society by legally recognising "hijra" as a gender identity.

However, the Thomson Reuters Foundation interviewed several trans activists who said little has been done in practice to enable trans people to gain access to education, employment and other rights.

In addition, the precariousness of their livelihoods exposes them to destitution and abuse when they are caught up in crises.

Sukta Sagarika, chairperson of the Hijra Youth Welfare Organisation in Sylhet, a place affected by the recent floods, has given shelter to hijra people whose houses were inundated.

Hijra community members often rely on begging, performing at weddings or sex work to survive, and tend to live in small enclaves or rented houses.

"Hijras who rely on alms collection for their livelihood went without food," said Sagarika of the flooding impact. "Since government support was not forthcoming, I had to feed as many people as I could manage."

Disasters disrupt the work and regular life patterns of the trans and hijra communities and put them at risk of additional discrimination, said activist Mala.

"Transgender people cannot easily get access to the emergency shelters. They may get beaten and thrown out," she noted.

"Much of the support provided to transgender people is centralised in Dhaka, while those living in remote areas are often not included or represented," she said.

At the Banishanta brothel in the coastal region of Khulna in southwest Bangladesh, hijra sex workers live with their female peers in thatched houses near the Pashur river, putting them at risk of floods, cyclones and other climate threats, said Shaikh Md Mominul Islam (Moon), an activist working for trans rights.

A 2020 gender analysis by UN Women identified sex workers, including trans women, as one of the groups most affected by Cyclone Amphan.

The pandemic had already restricted their ability to earn a living and then the storm washed away many homes, yet they were cut off from aid and social support, the report said.

Emergency relief was primarily aimed at men, it added, while marginalised groups like trans people were left in the lurch.

Trans people who do not identify with hijra culture also have a hard time pursuing education and employment due to harassment and discrimination and are almost socially invisible.

Banker Sudha noted she has often been called a "hijra", even though "hijra and transgender are not the same".

"Hijra is not a gender identity but an age-old subculture in South Asia," said Manisha Meem Nipun, who runs the Pathchola Foundation Bangladesh for gender and sexual minorities.

The earliest mention of hijra people - traditionally comprising eunuchs, intersex and trans people - can be dated back to the Mahabharata, a Sanskrit epic written between the third century BC and third century AD.

The hijra culture has become associated over the centuries with practices such as guru-disciple relations, public begging and sex work, said Moon.

Following their legal recognition in 2014, hijra people gained the right to change their official documentation, such as passports, to reflect their gender identity.

Hijra were also included as a separate category on Bangladesh's national voting list in 2019.

But getting official papers remains an uphill struggle.

When opening a bank account, Mohona, a hijra who was assigned male at birth and runs an organisation to help hijra people find jobs in Rajshahi, had to get local authorities to certify she was the same person as recorded in her national ID.

"Changing documentation is a complex, time-consuming and labyrinthine process in Bangladesh anyway - and when it comes to changing one's gender identification on papers, it can become genuinely prohibitive," said trans activist Moon.

In 2018, the government put the number of hijra people in Bangladesh at about 11,000, although activists like Mohona say the real figure may be higher.

But trans people who are not part of the hijra community remain unaccounted for in official policies.

The government created a separate category for hijra people in the national census carried out this month.

But as there is no clear definition for trans people, they may not be accurately represented, while the data collection process did not include hijra or trans enumerators as had been expected, activists said.

The government's hijra community development policy, drafted in 2013, defines its members as sexually handicapped people - a definition many find offensive.

"This makes no sense, because transgender identity has nothing to do with sexual disabilities," said Moon.

The government offers training and employment opportunities to help hijra integrate into society - but often these do not suit people's needs, said Mohona.

"Although I am a university graduate, the government offered me a low-grade job," said Sudha.

She went on to take a recruitment test for a private commercial bank and got selected as the top candidate.

"We are now speaking up to get transgender people recruited in various organisations," she added, urging educational institutions also to encourage more trans and hijra students.

"There is a need to upgrade the skills and competencies of the hijra and transgender community", said activist Moon.