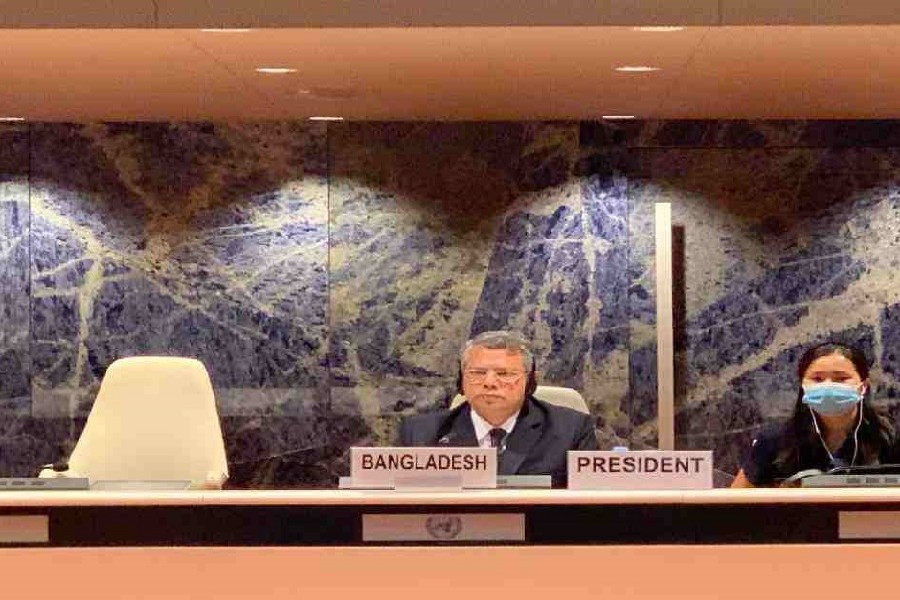 Bangladesh has assumed presidency of the Conference of Disarmament in the United Nations Headquarters in Geneva and reiterated its commitment to general and complete disarmament to preserve global peace and security, UNB reports.

Once in nearly 11 years, the opportunity to preside over the Conference on Disarmament rotates among its member states.

This Conference is recognised as a significant body in disarmament discourse with all nine nuclear states figuring among its 65 members, said the Permanent Mission of Bangladesh in Geneva.

As the president of the Conference, ambassador and Permanent Representative of Bangladesh M Shameem Ahsan urged the member states to revitalise multilateral negotiations in pursuit of the disarmament goals.

Paying his deep tribute to the victims of the Hiroshima and Nagasaki atomic bombings on its 75th anniversary this year, Ambassador Ahsan emphasised upholding and strengthening the global disarmament architecture.

Mentioning that the pandemic has exposed the planet’s vulnerability and its unpreparedness in facing such sudden and colossal crisis, Ahsan underscored the need to focus on enhanced spending on healthcare, education and overall economic resilience building as a global solution to such emergencies.

“As a nation in development transition, Bangladesh always advocates for channelling the massive resources deployed for an arms build-up to deserving imperatives of economic development,” said the PR of Bangladesh.

The Conference on Disarmament saw the enthusiastic in-person as well as virtual participation of the member states who stressed the need on addressing the challenges that have led to a stalemate in the work of the Conference as well as in arms control and disarmament.

Referring to the 50th anniversary of the Nuclear Non-Proliferation Treaty being observed this year, Tatiana Valovaya, the Director General of UN office in Geneva and Secretary General of the Conference on Disarmament, highlighted the importance of commencing work in the Conference to negotiate new global legal instruments to counter the erosion of the disarmament and non-proliferation measures.