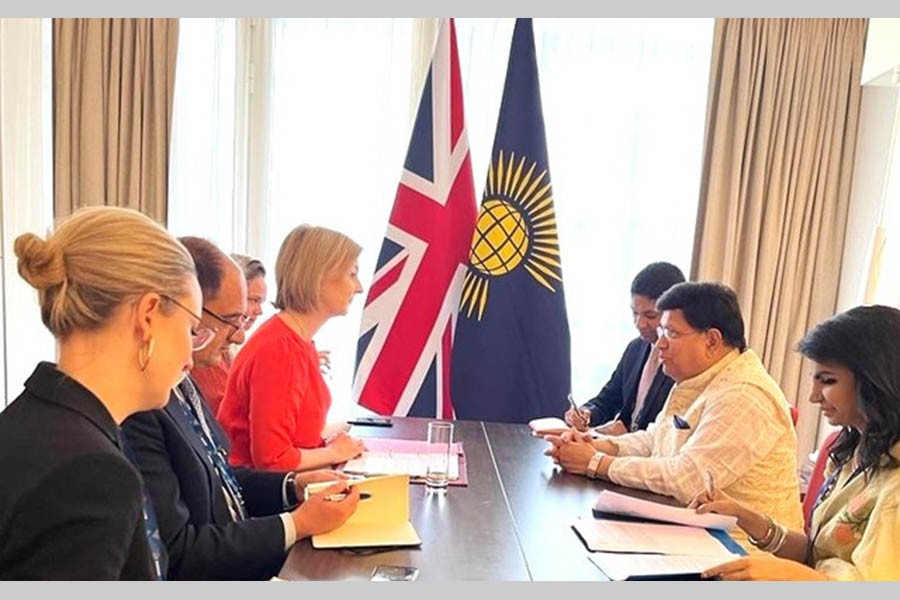 Foreign Minister AK Abdul Momen has called on the United Kingdom to resettle 100,000 Rohingya currently living in Bangladesh in order to ease the burden of the refugee population on the country.

The proposal was made during a bilateral meeting with his British counterpart Elizabeth Truss, according to a statement from the Bangladesh High Commission in London.

The foreign minister said the resettlement would allow the UK, a global leader in justice and human rights, to provide the refugees with a better life and also lessen the unfair burden on Bangladesh.

Britain's foreign secretary thanked Bangladesh for its generous hosting of the Rohingya and responded that “while the UK could look into it, the best solution to the Rohingya crisis, however, lies in their safe and sustainable return to their homeland in Myanmar”.

Momen briefed Truss regarding the ongoing Rohingya crisis and the current stalemate in arranging for their safe and sustainable repatriation due to the absence of commitment by the Myanmar government.

Truss reiterated the UK’s commitment to resolving the crisis and said the UK, along with G7 and ASEAN countries, would pressure Myanmar to resolve the protracted situation.

“Myanmar took them back as they were under sanctions at that time by the West, which is not the present case, while UK and other western countries continue to invest heavily into Myanmar, despite living proof of their persecution of Rohingya and adjudication of their justice at the ICJ.”

The UK has made $2.5 billion worth of investments into Myanmar just over the past three years, while bilateral trade between the nations stands at over $500 million, Momen noted.

Bangladesh can no longer simply shoulder the burden of 1.1 million forcibly displaced Myanmar nationals, he said.

The two foreign ministers also reaffirmed the ties between Bangladesh and the UK during their first official bilateral meeting in Kigali and vowed to exchange high level visits to celebrate the 50th anniversary of diplomatic relations between the two countries.

Both of them also welcomed proposals to jointly organise a Global Girls Education Summit, a climate leaders’ dialogue, and a Rohingya Conference in their capitals.

Truss expressed concern about the low numbers of Bangladeshi students going for higher education in the UK. Momen responded that the British High Commission in Dhaka was issuing fewer visas for students and businesses and requested the visa processing facility for these be relocated back to Dhaka so that at least 7,000-8,000 Bangladeshi students can travel to the UK for higher education each year.