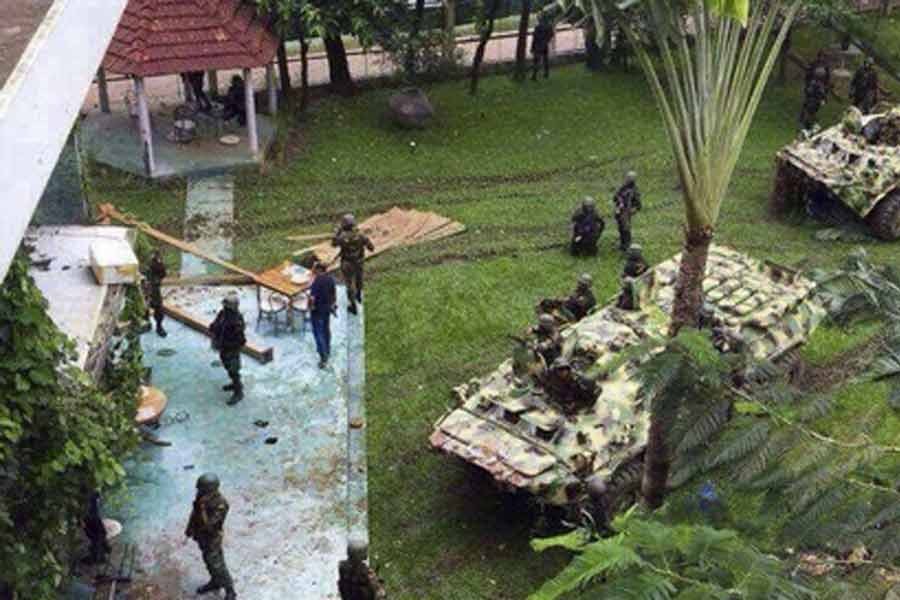 The night of July 1 six years ago will go down as one of the darkest in Bangladesh, shaking the country to its very core.

It was business as usual on a Friday evening during Ramadan in 2016 at Holey Artisan Bakery, a trendy eatery in Gulshan which was popular with foreigners for its food, lakeside view, and green lawn, reports bdnews24.com.

But the mood changed when five men armed, with guns, sharp objects and grenades, stormed into the café around 8:45 pm. Shock soon turned to horror as a bloodbath began to unfold.

As the international media started covering the biggest story of the day, many were still held hostage inside the café.

By the time the siege was brought to an end by a commando raid the next morning, the five militants killed 22 people, including 17 foreign diners, making it the worst terrorist attack in Bangladesh.

The wounds still run deep but security forces have ramped up efforts to tackle terrorism. Police say "positive" changes have been made, which is why Bangladesh now ranks "so well" on the global terrorism index.

The Holy Artisan had attack stunned law enforcement, too, as they were not accustomed to dealing with a terrorist attack on that scale.

The Counter-Terrorism and Transnational Crime (CTTC) unit of the Dhaka Metropolitan Police was formed just four months before the incident to curb militancy and terrorism. They were also taken aback by the attack at first.

The events of that night have also changed the country's approach to security. Now, ahead of any state ceremony, security forces conduct drills around the area while the bomb disposal unit sweeps the vicinity for any threat.

Several units of the police, including the Rapid Action Battalion and the CTTC, have brought in trained dogs to form 'canine units'. These dogs can now be seen with security forces before any significant event.

After the smoke from the Holey Artisan attack cleared, the security forces soon launched a fully-fledged crackdown on militancy.

Twenty-five days later, the CTTC raided a militant hideout in a building known as 'Jahaj Bari' in the capital's Kalyanpur. Nine militants were killed there. Since then, a series of raids have been conducted across the country in places like Narayanganj, Gazipur and Sylhet.

According to the CTTC, they have carried out 23 "high-risk operations" since the Holey Artisan attack, killing 63 people. Among them was Tamim Chowdhury, one of the masterminds of the terrorist attack.

In the last six years, the CTTC has arrested a total of 559 militants, while another 472 were detained on charges of spreading extremism online.

Drawing from the experience of the Holey Artisan carnage, special cells were formed by different units of the police to combat the militancy before the advent of a separate Anti Terrorism Unit in November 2019 with a mandate to tackle extremism across the country. The RAB also has a separate cell focussing on militancy.

Hundreds of officers have since received training and higher education abroad on militancy and terrorism. New weapons, equipment and cars have also been acquired. The CTTC in Dhaka also has two sophisticated robots brought from Germany at its disposal to deal with bomb threats.

In addition to enhancing the operational capabilities of the law enforcement agencies, the government has also attached a great deal of importance to curbing militant and extremist propaganda.

CTTC chief Md Asaduzzaman said awareness programmes were being carried out across the country under the Bangladesh Police's 'Prevention of Terrorism and Construction of International Crime Prevention Centre' project. So far, such programmes have been held in 48 districts.

"If a parent does not know the symptoms of militancy, he will not be able to save his child. These are the issues we are emphasising.”

As a result of such initiatives, Asaduzzaman claims extremists are no longer able to "entice" the younger generation online.

“Our youth has learned to reject their calls. They are not responding to extremists. Their online radicalisation activities have also completely failed. ”

A "de-radicalisation" programme is also in the works to help those who were indoctrinated with extremist ideas.

"The de-radicalisation of militants in prisons is about to begin. For that, we need psychologists along with Islamic clerks or scholars to explain to them that they have been led astray through the misinterpretation of Islam. The process of making these appointments is underway. ”

Asaduzzaman said Bangladesh now ranks 40th on the International Global Terrorism Index due to all these measures.

"We are better off than many developed countries," he said. "Bangladesh is the safest country in South Asia."