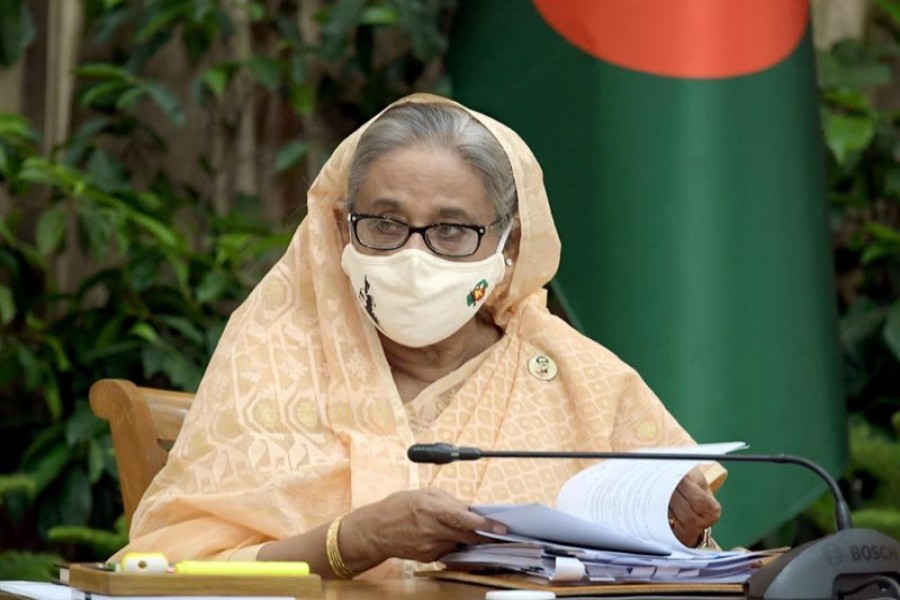 Prime Minister Sheikh Hasina has expressed her gratitude to the countrymen for standing beside her in building the Padma Multipurpose Bridge, saying all credit goes to the people of Bangladesh for its construction, BSS reports.

"I am really grateful to the people of Bangladesh for standing by me in this way. Their strength is the greatest strength (for me)," she said on Sunday.

The premier said this while speaking at the beginning of the Cabinet meeting held at the Secretariat.

She chaired the meeting virtually from her official residence Ganabhaban in Dhaka city.

Sheikh Hasina said the construction of Padma Multipurpose Bridge, which opened for traffic on June 25, is a huge milestone in changing the destiny of the people of Bangladesh. "So, I sincerely thank everyone," she added.

She also mentioned that the construction of the Padma Bridge here is a history.

She said those who were involved here, especially the finance minister, finance secretary and others, none was stingy, rather they made it easier in accumulating money to build the bridge by own.

"This credit belongs to everyone. I thank everyone," she continued.

She went on saying, "Especially, when the slander was given to us, it was not acceptable."

Sheikh Hasina recalled the time when she announced that the Padma Bridge will be constructed with own money without taking it from anyone.

"My biggest strength was the response of our people because they all stepped up and told me that you go ahead, we will arrange the money," she added.

"But, the saddest thing is that we could have started (construction of the bridge) earlier and ended earlier (if there was no conspiracy)," she noted.

The head of the government said another unfortunate thing was that "some of our economists, the knowledgeable person, started to say that it (bridge) will not be viable, who will use it here, no money will be raised, but what is being seen now . . ."

She noted it will bring a change in human life and livelihood of people.

Before the bridge on Jamuna River, she said, there was "manga" (famine) in North Bengal every year but after the construction of Bangabandhu Bridge on it, the manga is no longer there.

Sheikh Hasina said they constructed the Padma Bridge alongside building bridges on other rivers to ensure connectivity in the south.

Turning to Hilsa fish, she said the season of Hilsa has come, adding now netting of Hilsa will begin again and all can get the taste of fresh Hilsa staying in Dhaka.

"The businessmen, even the fishermen will also be benefitted. They are also waiting with hope," the premier said.