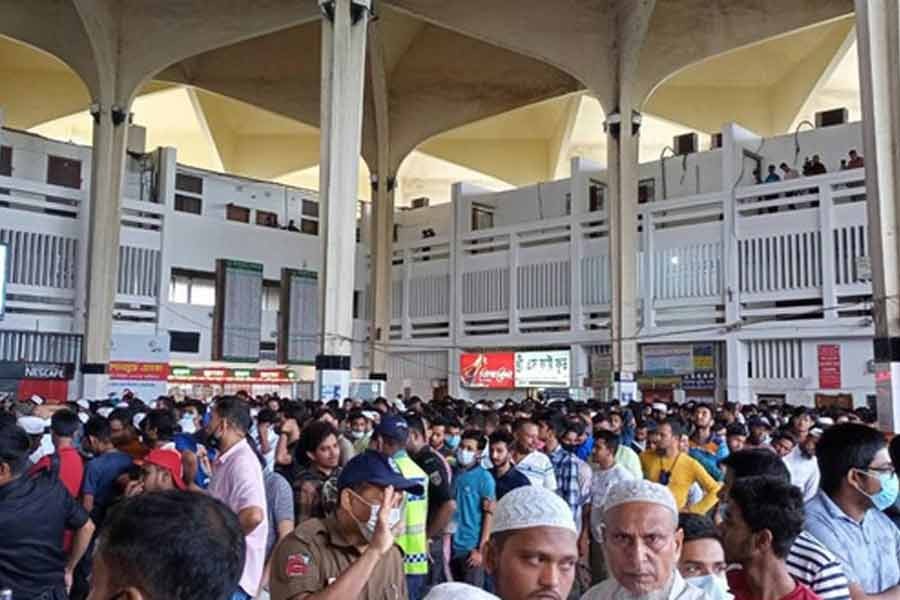 After waiting for almost 12 hours at the Kamalapur Railway Station, Abdur Rahman returned home empty-handed on the first day of the advance train ticket sale ahead of Eid-ul-Azha.

But he wasn't alone. Many others were similarly frustrated as the tickets sold out within four hours of going on sale.

The sale of advance train tickets for Jul 5 started at Dhaka's Kamalapur, Fulbaria, Bimanbandar, Tejgaon, Cantonment and Gazipur's Joydebpur stations at 8 am on Friday, reports bdnews24.com.

The counters were supposed to be open until 4 pm but they ran out of tickets by noon, said Kamalapur Station Manager Masud Sarwar. He had previously admitted that the stations did not have enough tickets for all those who gathered at the counters.

"We will sell 26,739 tickets, half of them online and the other half over the counter. We cannot guarantee a ticket for everyone."

More than 13,000 tickets were sold at nine stations. Tickets for seven north-bound trains were issued in Kamalapur.

Crowds had gathered at Kamalapur Railway Station well before the 16 ticket counters opened at 8 am. Many arrived at the station on Thursday.

"I arrived at the station around 12:30 am on Friday. I will travel to Panchagarh along with my family to celebrate Eid. But I did not get tickets. I will come again in the afternoon," Sutrapur-resident Rahman said.

"I actually need tickets for AC compartments. Shovan Chair tickets were available, but I didn't buy them," he said when asked about people who had arrived at the station after him but managed to secure tickets.

Anjan Chowdhury, a student of Dhaka University, also failed to get his hands on tickets after enduring a long wait at the station. He said he would try again on Sunday.

"I joined the queue in the morning. I have tried to purchase e-tickets as well. But no tickets were available either online or at the counter."

Meanwhile, return tickets will be on sale from Jul 7.

Tickets can be purchased from counters at the station between 8 am and 4 pm. A separate counter has been designated for women and people with special needs.

Passengers will be required to show national identification cards or birth certificates to purchase tickets.

Tk 13b waterway project to connect Gulshan, Banani with Hatirjheel