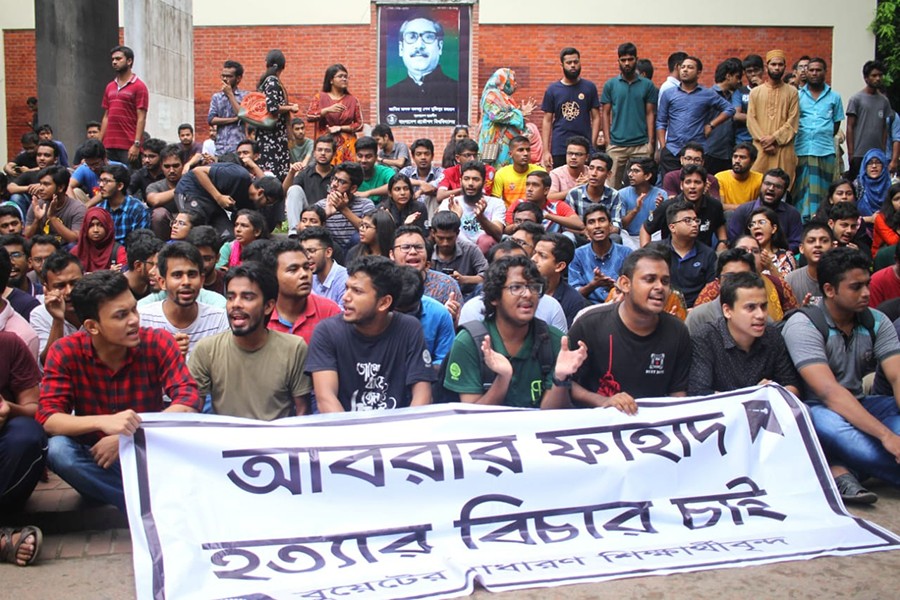 Disgruntled protesters of Bangladesh University of Engineering and Technology (BUET) have called on the authority to ban student politics in the university as part of a fresh 10-point charter of demands in the wake of second-year EEE student Abrar Fahad’s murder.

Three spokesmen for the demonstrators set out the list of demands at a media briefing on Wednesday after student protesters took position in front of the Central Shaheed Minar for a third day.

The demands include calls for the withdrawal of the provost of Sher-e-Bangla Hall and the identification and expulsion of the killers from the university within October 11, among others.

The university authority has been given until October 15 to implement the rest of the charter, including payment of compensation to Abrar’s family and the immediate disclosure of a copy of the case’s charge-sheet, says a bdnews24 report.

“If the demands aren’t met within the deadline then all academic activities, including the BUET admission tests will have to be suspended,” said a spokesman for the protesters.

The body of Abrar, a second-year student of electrical and electronic engineering at the Bangladesh University of Engineering and Technology or BUET, was found on the staircase of his hall if residence in the early hours of Monday.

He was called up from his room at 7:30pm on Sunday, said police, quoting the students of the hall.

An autopsy at Dhaka Medical College Hospital subsequently revealed that Abrar was bludgeoned with blunt objects.

There were numerous injury marks on his hands, feet and back, a doctor said, adding the student died due to internal bleeding.

His death has triggered protests on the BUET and Dhaka University campuses.

His classmates claimed that Bangladesh Chhatra League men beat him to death suspecting his involvement with Islami Chhatra Shibir.

BCL's central committee expelled 11 leaders and activists of its BUET unit over the incident.

Footage captured by a closed-circuit camera installed on the residential hall's second floor showed a few people dragging Abrar down the corridor by his hands and feet.

The individuals caught on camera were all junior leaders and activists of the hall's BCL unit, according to some students.

Police have arrested and remanded for five days 10 BCL leaders of the BUET unit. The case shifted to Dhaka Metropolitan Police’s Detective Branch and three more out of the 19 accused in the case were arrested on Tuesday.

Public transport services on limited scale from May 31

More than one in six youth out of work due to COVID-19: ILO