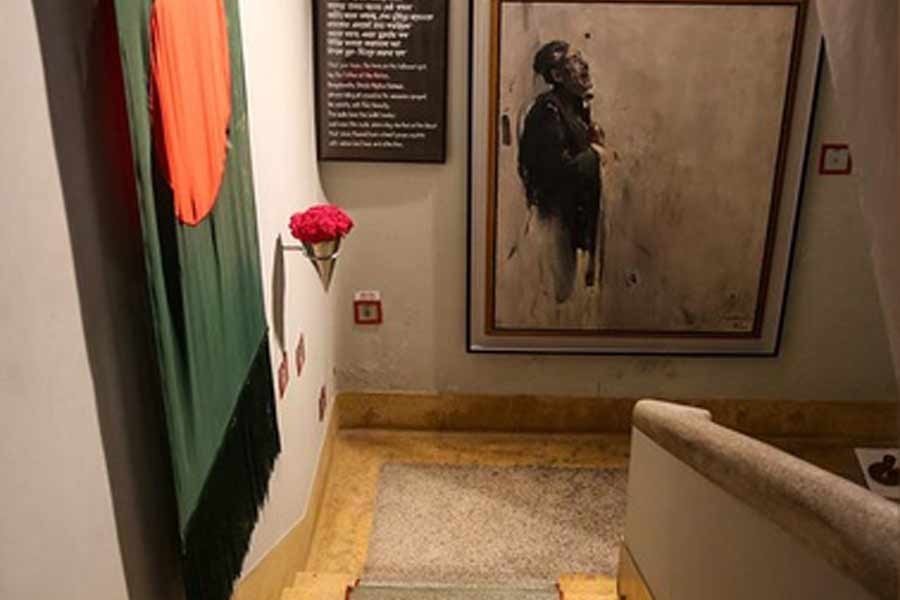 From 1961 to 1975, the famous Dhanmondi house witnessed every milestone in the journey of Bangladeshis toward independence.

It was on the evening of August 15, 1975, a dark chapter unfolded at the house in the history of Bangladesh when a group of rogue army soldiers assassinated Father of the Nation Bangabandhu Sheikh Mujibur Rahman and most of his family, according to bdnews24.com.

Forty-five years after the carnage, the house, now a museum on the leafy Road No. 32 in Dhanmondi, still rekindles the memories of the morbid day. The carnage shaped up into one of the bloodiest political assassinations in the world.

Bangladesh observes the day as National Mourning Day in memory of the victims of the military putsch.

This year the government has scaled down the programmes as the shadows of the coronavirus epidemic still linger. Visitors are not allowed to go inside and pay their tribute.

“We’re not observing August 15 like the way we did every year in the past, but we can nurture it mentally — which means we can nurture the ideology of Bangabandhu within us and work hard to revive the economy amid the pandemic to ensure the employment of the working class,” Nazrul Islam Khan, curator of Bangabandhu Memorial Museum, told bdnews24.com.

Bangabandhu Sheikh Mujibur Rahman began to live in the house at Dhanmondi in 1961. It became the hub of the country’s struggle for independence. Bangabandhu laid down his vision for an independent Bangladesh in this house. He showed the Bengalis the path towards the most coveted freedom from oppression. The nation acknowledged its architect as the greatest Bengali of all time.

Sheikh Hasina and Sheikh Rehana, daughters of Bangabandhu, donated the Dhanmondi house, which was their ancestral property, to the state.

With its premises filled with banners and festoons, the house is being prepared for the observance of National Mourning Day.

Abdul Motaleb, a resident of Shanir Akhra, came to pay his tribute to the mural of Bangabandhu in front of the museum on the eve of National Mourning Day.

“Every year on August 15, I come here with my grandchildren to pay our tribute. We can’t come this year due to the coronavirus epidemic. I came to Dhanmondi for something else, so I came here now to pay my tribute.”

The pandemic cut the number of visitors to the museum, but some people still visit the place of reminiscences.

“I have innumerable memories related to this house. I came to Dhaka for the first time with my father in January 1975. I was 8 or 9 years old. We lived near Rayerbazar. My father used to point to the house saying— ‘See, this is Bangabandhu’s house,’ whenever we passed it,” said Salahuddin, a businessman.

“When Bangabandhu and his family were assassinated on August 15, my father refused to stay in Dhaka anymore, saying, ‘We had killed the man who brought us freedom’.”

“Later my mother and uncles took my father back to our village home. He never came back. I come and sit here whenever I get a chance. I have never seen the father of the nation. I just come here and listen to other people talking about him.”

A group of college students made their way to Bangabandhu’s mural after answering questions from security guards.

“We used to hang out here before the pandemic broke out. We bought the books ‘Karagarer Rojnamcha’ and ‘The Unfinished Memoir of Bangabandhu’ from this museum. We were unaware of so many facts in Bangabandhu’s life. We want to know more about him,” said Khaled Mahmud, one of the students.

“Attempts were made to distort the history after Bangabandhu and his family were killed in 1975. Changing the facts in the textbooks was one of them. Even now the young generation is confused about Bangabandhu,” said Nazrul Islam, the curator of the museum.

“The Awami League government has been working to uphold the real history by correcting the distortion after they came to power.”

One can visit the Bangabandhu Memorial Museum virtually if they cannot come physically. A virtual tour is available to show every nook and cranny of the house at Road No. 32 in Dhanmondi.

The museum has arranged a virtual showcase of different documents of history to the young generation.

It is the biggest challenge to spread the ideology of Bangabandhu among the new generation, according to Khan.

The nation should follow the teaching of Bangabandhu to overcome the crisis during the ongoing pandemic, he said.

“In his historic speech on March 7, Bangabandhu called for everyone to come forward and combat the enemy with whatever they had. Just like the Pakistan army regime back then, the coronavirus is our enemy too. As our economy has been battered by the coronavirus pandemic, we must get inspired once again by the call for action as made by Bangabandhu and work sincerely and honestly. Only then we’ll be able to get rid of this coronavirus.”