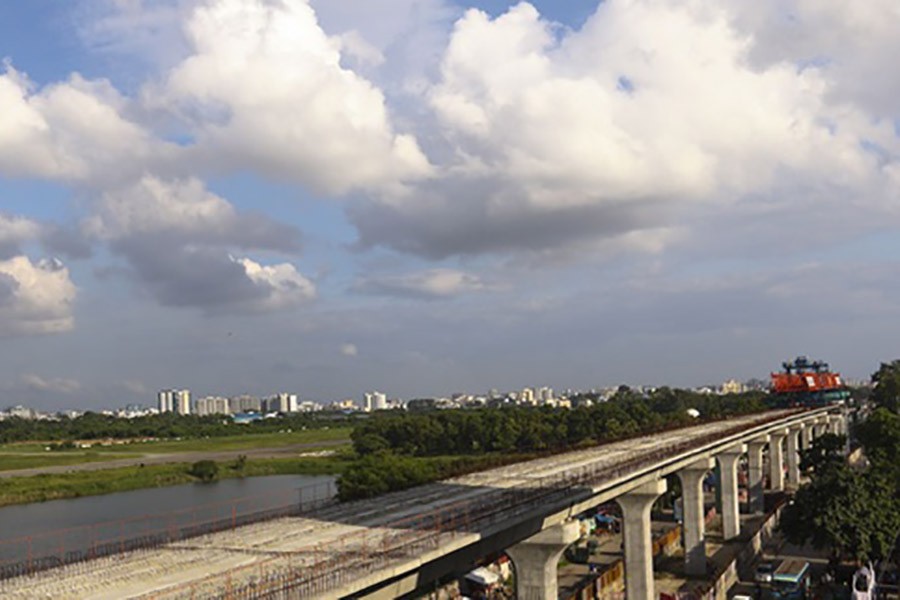 The construction work of the metro rail is progressing fast as an 8.04-kilometre viaduct from Uttara to Agargaon has become visible.

“So far 38.35 per cent of the 20.10-kilometre metro-rail project from Uttara to Motijheel has been completed,” Managing Director of Dhaka Mass Transit Company Ltd (DMTCL) MAN Siddique said on Saturday.

He said 8.04 kilometres of viaduct out of 11.73-kilometres and nine metro stations from Uttara to Agargaon under 3rd and 4th packages has been constructed.

Besides, he said, there has been 23.58 per cent progress in electrical and mechanical system, rolling stock (rail coach) and collection of depot equipment work.

“At the instruction of the honourable Prime Minister, the social survey to expand the Mass Rapid Transit Line-6 (MRT Line-6) from Motijheel to Kamalapur is going on,” he added.

According to the project details, the Uttara-Agargaon part of the MRT Line-6 under 3rd and 4th packages marked 59 per cent progress. Viaduct erection and parapet wall construction work is going on smoothly.

Construction work of concourse at Uttara North, Uttara Centre and Uttara South Stations is going on, while a contractor has been given the task of setting up 1.74-kilometre rail line and Overhead Catenaries System (OCS) Mast.

The construction progress of Agargaon-Karwar Bazar part under the fifth package rose to 34.75 per cent, while that of Karwan Bazar-Motijheel part to 36.93 per cent.

The government has been implementing the metro rail project from Uttara to Motijheel in eight packages.

The land development work of depot (package-I) area which started on September 8, 2016 has been completed. The progress of civil work under the package-2 is 57 per cent and the rest of the work will be finished by June next year.

On February 16 in 2019, the Japanese company started building bogies for MRT Line-6 under the package-8 (Rolling Stock and Depot Equipment Collection).