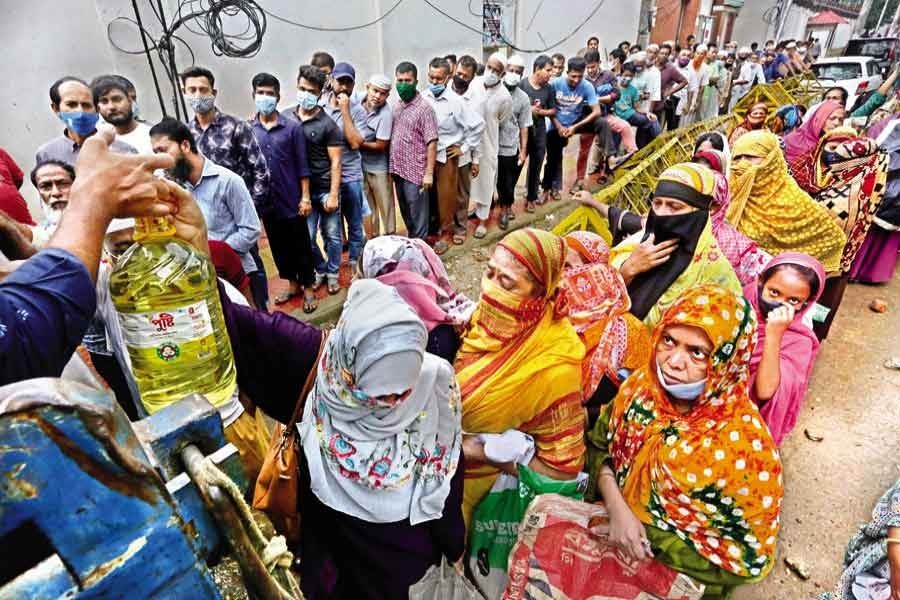 At least 39.5 per cent of the eligible poverty-stricken households didn't get family cards issued by the Trading Corporation of Bangladesh (TCB) to buy certain food items at subsidised prices, according to a study.

The study, conducted by the Transparency International Bangladesh (TIB), published on Thursday underlined corruption, irregularities and lack of proper information as the key reasons behind exclusion of the families.

Findings of the study, titled 'Governance Challenges in TCB's Family Card Programme', were presented at a virtual press conference organised by the TIB.

In a presentation, Mr Nure Alam showed that around 80.4 per cent of the survey respondents who didn't get the TCB's family cards think corruption and irregularities are the main cause of their exclusion.

Besides, about 14.1 per cent have no idea why they aren't in the list while 5.5 per cent of the respondents said that they voluntarily refused to take the cards.

The international graft watchdog conducted the survey on a total of 1,047 households from 35 districts across the country in between 18 and 26 April, 2022.

The root causes behind exclusion of the eligible beneficiaries, as identified by TIB, are inadequate dissemination of information about the family card among the target population, beneficiary's lack of connection with powerful people, political consideration, inclusion of people who don't need such support, giving multiple cards to same families, bribery, etc.

Speaking at the programme, TIB Executive Director said nearly all the country's low-income people could be brought under TCB's initiative but 39.5 per cent of them were deprived of their rights due to political influence, mismanagement, lack of transparency and above all widespread corruption.

He said the programme had the potential to cover about 40-50 million or 25-30 per cent of the population in the country, he said.

But the lack of preparation, mismanagement, lack of transparency and irregularities held back the programme's benefits reaching the underprivileged people, he added.

Dr Iftekharuzzaman also said, "Due to the culture of lobbying, relatives of many local public representatives got the cards though they might not need those, depriving many people in need."

The TCB decided to provide affordable products through family cards to about 10 million low-income families in March-April 2022, where 3.85 million beneficiaries were included from the Tk 2,500 cash assistance programme during the pandemic, while 6.15 million were new beneficiaries.

TIB also placed some recommendations to make the TCB family card programme more effective - redesigning food packages as per the ability and need of the beneficiaries, maintaining quality of product through proper testing, increasing the number of sales point to take the programme closer to cardholders, introducing hotline number to receive complaints from the support recipients, penalising the people involved in irregularities in distribution process, etc.

Reduced VAT of 5.0pc on edible oil to continue till December

Service fees of private hospitals to be fixed