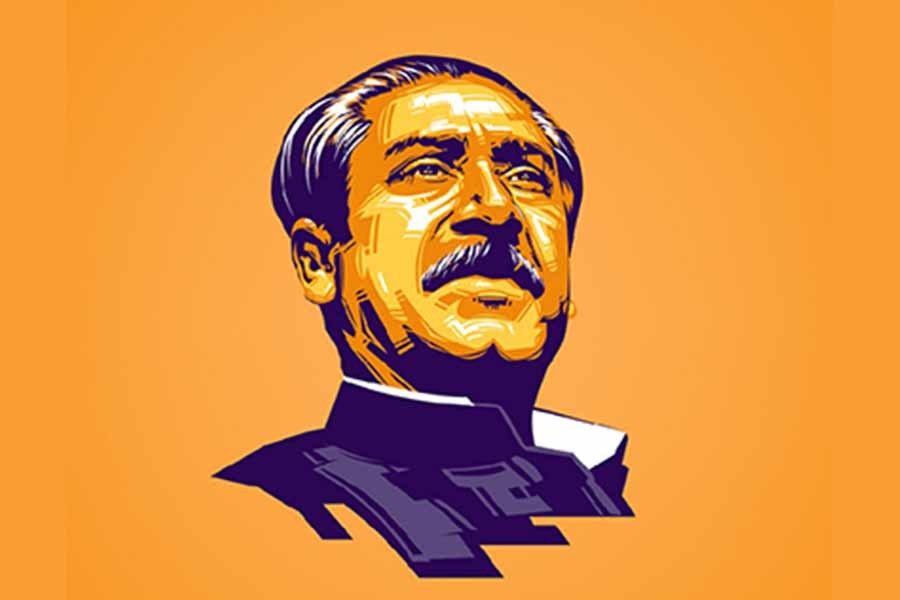 Today, March 17, 2021, the people of Bangladesh are commemorating the 101-birthday of the Founding Father Sheikh Mujibur Rahman. Politicians, writers, historians, and activists will highlight different aspects of his political philosophy, strategies, and activisms he had demonstrated during his long political career. But they all have one common goal of idealising the Founding Father for the new generations who have passed through a time-period that might be characterised as a Period of Not Telling the Truth.

In this celebration, it is quite natural to have some open discourse on the life of the Founding Father. Scholars of different fields will review his public life using micro-level data. This kind of calibration will generate discussion about the leader's public activities from an objective perspective. However, discussion about a contemporaneous personality is different than speaking about a character of way past where the sources are all secondary and no scope of personal reflections because everything happened many years ago. Today's celebration will bring many personal reflections about the Founding Father's public life because a large number of Bengalis are still alive to reflect on the activities and speeches he made during his life. Bangabandhu did not have any support of conventional sources of power like money, family ties, or nobility but succeeded in mobilising the total population, except a handful of people of Erstwhile East Pakistan to rise like a tsunami and take arms for independence of Bangladesh. He rose to the epitome of popularity and remained as people's leader until his death. Thus, we need a people's perspective to measure him. No traditional methods that we learned from the Western scholarship are capable of measuring his love, dedication, and sacrifice for the people of this land.  This brief article proposing to construct a reflective theoretical perspective for a paradigm shift to measure a people's leader.

LET THERE BE A PARADIGM SHIFT: People with modern education will most likely measure the Founding Father from their perspective which has grown out of the Western scholarship. And the Western scholarship itself has been under criticism for its own biases of Euro-centrism and later mixed with US-Centrism. For a long time, European thinkers did not have many positive views about Asian and African countries. Before the rise of the United States as a leader of the Western countries, it had been European countries that carried demeaning views about the Asian and the African countries mostly viewing from their biases which later termed as Euro-centrism. Some kind of Euro-centrism is very old indeed. In the fifth century b.c.e. the Greek historian Herodotus referred to Asians as "barbaric hordes" even though he noticed Asian splendid architecture because they lacked European individuality. Even Karl Marx who condemned British activities in India in his article entitled "The British Rule in India," published in the New-York Daily Tribune on 25 June 1853,still considered (unfortunately) British colonialism as a historically progressive force. However, Voltaire viewed China and India very positively, especially China, which drew his praise for its secular government. He recognised the contributions made by both the Chinese and the Indian civilisations at a time when Europe was still at the stage of barbarism. Wittfogel was a naturalized US citizen who published Oriental Despotism (1957) and branded China and India as "despotic" societies.

Later Edward Said regarded deep ethnocentrism as "Orientalist" and the term ethnocentrism was first coined by W. G. Sumner, an American sociologist to describe prejudicial negative attitudes about another group. Said developed a theory of "Orientalism" applicable to all non-Western societies where "colonized" knowledge means that there is a power dimension of superiority in Western scholarship, which is deeply "hegemonic." The result is that Western elements are simply superior to any non-Western items. Certainly, it is incapable of examining Asian or African cultures and societies due to "Orientalism."  It is in line with a Western political agenda and suits Western interests generally. Unfortunately, the founding bases of our knowledge and intellectual framework do reflect the Eurocentric attitudes transmitted through our western education. In today's global-village especially in a post-Trump era, social media has become a dominant force in infiltrating our conceptual and theoretical explanations of any social phenomenon. Surprisingly, the Western scholarships remained so deeply ethnocentric towards non-Western cultures that it has become a narrow "elitist oligarchic" system.

The Western ruling class due to the "elitist oligarchy" always busy finding flaws of others and especially due to its hegemonic character always remained "outward-looking." And due to this "outward-looking" nature, it could not see its inner evil spirits like racism, domestic terrorism and "white-supremacism." How much the elitist oligarchic scholarship will learn from January 6-insurgency is yet to be seen. In this context, I intend to highlight another aspect that suggests that Western scholarship remains too loyal to nobility and aristocracy not much reverence  about its popular leader.  The western scholarship is not only deeply ethnocentric and Eurocentric it is equally anti-people-highly elitist and oligarchic. The Western scholarship is not a suitable tool to measure a popular leader like Bangabandhu Sheikh Mujibur Rahman.

To create a people's history about people's leader like Bangabandhu an extensive multi-stage data collection strategies needed to be designed which must have an extensive oral interviewing of ordinary people who loved him, followed him for no personal gain, prayed Nafal Namaz, and performed Roza for his safe return.

Bangabandhu's works remain an eternal tribute to his achievement.