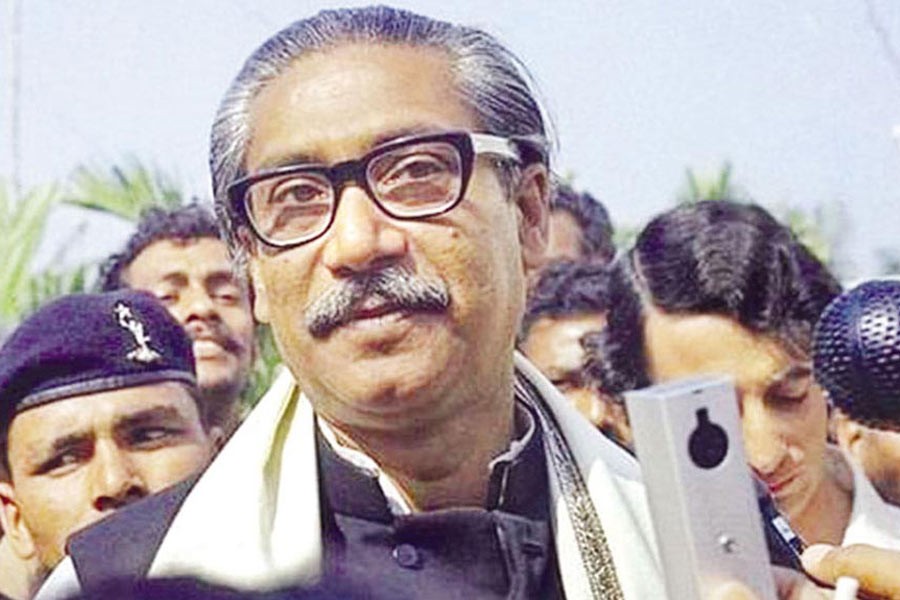 On 26 February 2021, the Committee for Development Policy (CDP) of the United Nations gave their final recommendation for the graduation of Bangladesh from the category of Least Developed Countries (LDCs) to that of Developing Countries. This has been a record achievement for Bangladesh as no other country has graduated with similar flying colors. This was one of the best possible gifts to the people and leadership of Bangladesh in this difficult time of Covid-19. The occasion is especially joyous as Bangladesh has been celebrating the birth centenary of its Father of the Nation Bangabandhu Sheikh Mujibur Rahman and is on its way to the golden jubilee of the independence of the country.

At this moment of great joy and national pride, Bangabandhu's aspirations and actions for building 'Shonar Bangla' (Golden Bengal) have become more relevant than ever. He made the people believe in their own ability to overcome numerous hurdles and attain their desired goals of peace and prosperity.

The fighting spirit that he kindled and imbued his people's mindset with, steered them through the dark decades following 15 August 1975. Evil forces took him away physically, but his aspirations and actions kept his people awake and they kept on fighting for his ideals. As a result, the country got back on track after decades of struggle. And under the leadership of his daughter Honorable Prime Minister Sheikh Hasina, the country restarted its journey from 'ashes to prosperity' defying many challenges. And the amazing journey continues. No doubt, the well-reputed Wall Street Journal in one of its recent articles projected Bangladesh as an 'Economic Bull Case' of South Asia. According to WSJ, Bangladesh resembles the successful Asian development models seen at various stages of recent history in South Korea, China and Vietnam. The journal particularly highlighted its rapid pace of progress in terms of exports and per capita GDP in comparison with its South Asian peers.

It is heartening to note that all the good news is pouring in the year of its celebration of the Father of the Nation and the golden jubilee of its independence. The nation owes a lot to the initial push made by Bangabandhu as a founding father and subsequent farsighted statesmanship of the present Prime Minister Sheikh Hasina.

He chose politics as an instrument to stand by the have-nots. In fact, he felt cheated after the partition of Indian sub-continent and could easily see that the creation of Pakistan was a 'false dawn' as the new state was swiftly captured by the elites with their ulterior motives. So, he started organizing the youths to protest discriminatory policies of the one-eyed Pakistani state. He got involved in the movement for better wages for the low-paid employees of Dhaka University, where he was studying law.

In between all this, he started organizing the language movement as an influential student leader who was also the founder of the East Pakistan Muslim Student League in early 1948, with support from his other co-organizers. He was very active in the language movement for which he had to embrace his first-ever political imprisonment in March 1948. Not surprisingly, Bangabandhu was again arrested for not compromising on his stance of ensuring justice for the less powerful university employees. And he was subsequently expelled from Dhaka University for not signing a bond begging apology to the authorities. Instead, he kept his head high and preferred to be expelled from the university. He then walked into national politics. He started forming the new opposition party against the ruling Muslim League with his peer groups.

Then came the second wave of the Language Movement, and he was inevitably imprisoned for his deeper connection with the movement and his political activism. He kept close contact with the student leaders who were organizing the language movement from Dhaka Medical College Hospital, where he was being treated as a political detainee under the strong surveillance of the intelligence branch officials.

The share of the revenue budget for the Bengalis was so paltry as most of the civil and military employees were from West Pakistan. Only 15 per cent of civil services and five per cent of armed forces personnel were from the eastern wing (Nurul Islam (2020). "Bangabandhu Sheikh Mujibur Rahman Kache Theke Dekha". Page 17-18. Prothoma Prokashon). Bangabandhu launched his historic Six-point Programme which reflected the deeper feelings of economic disparities of the people of eastern wing of Pakistan. This programme was so well crafted that it immediately caught the imagination of the Bengalis who lent their full support behind Sheikh Mujib. He was, therefore, put behind the bar. Consecuently, the people got further agitated and the Pakistani ruling clique made him the number one accused in the sedition case i.e., Agartola Conspiracy case.

The intention was to finish him off once for all. However, the students came out of their educational institutions and organized the mass uprising of 1969 in protest. The government was forced to release Sheikh Mujib and others paving the way for him to be the sole mouthpiece of Bengalis' interests. He was fondly decorated with the title of Bangabandhu by the student leaders in the presence of huge mass gathering.

The Ayub government fell under countrywide pressure and General Yahya took the helms of the government under a softer military rule with a promise to hold a free and fair national election. Bangabandhu took the challenge and started his election campaign, anchored in the basic tenets of the 'Six Points'. The people of East Pakistan grabbed this opportunity and voted overwhelmingly in favor of the Awami League to form the government. But the Pakistani clique was not ready to hand over legitimate power to the elected leader of the majority. Bangabandhu had to call for the war of independence after arousing the consciousness of his people through his non-cooperation movement. And thus, an independent Bangladesh was born at a huge cost of blood and sacrifice from the fighting people of Bangladesh.

Released from his long captivity in Pakistan, Bangabandhu arrived in his newly liberated Bangladesh as Father of the Nation on January 10, 1972, and immediately started a new war of reconstruction. Back in 1972, the size of the economy was only about 6.3 billion US dollars with no foreign exchange reserve, Savings-GDP ratio of only three per cent and Investment-GDP ratio of  nine per cent. The economy was predominantly rural with 60 percent of GDP coming from agriculture. The contribution of the manufacturing sector to GDP was only about six per cent. With such a meagre resource base he had to reconstruct the war-ravaged physical and social infrastructures, rehabilitate more than ten million war refugees, and restart most of the regulatory institutions, along with other organisations, amidst hostile natural and diplomatic environments.

Yet he relied heavily on agriculture, which continues to give us sustenance and extra strength. Simultaneously, he decided to nationalise almost all the industrial units as these were left unattended by the Pakistani entrepreneurs who left for Pakistan during the last days of the war. This was his only option. This decision also coincided with the prevailing demand for maintaining socio-economic equalities as enshrined in the Constitution. Despite serious challenges arising out of adverse natural calamities and subsequent food insecurity, he kept on raising his expectations of achieving a prosperous country and mobilizing its domestic and human resources.

Defying the domestic and international political and diplomatic challenges, he was able to improve the per capita income of the country three times higher in just four years. One really wonders- where we could be if Bangabandhu was not snatched away from his people on 15 August 1975! But he has been away only physically. He has been in our thoughts and in our fighting spirits. That is why our economy has returned on its track of inclusive development under the leadership of Bangabandhu's daughter- honorable Prime Minister, Sheikh Hasina. She too strides on both legs, encouraging both agriculture and industry to grow in tandem. Like her father, she is equally committed to the well-being of the disadvantaged and the extreme poor. It was, however, not an easy task for her. But she has remained focused on the inclusive development strategy begun by Bangabandhu.

As a result, today's Bangladesh has turned out to be one of the best performers in most development indices in Asia including per capita income (two thousand US dollars plus), defying all odds of the ongoing pandemic, as indicated by global institutions like IMF and ADB. The driving forces behind this amazing macroeconomic transformation of Bangladesh include modernized agriculture, rising remittances, higher low-skilled and low-cost export-led manufacturing sector (contributing 35 percent to GDP), more than 36 per cent of women participating in formal employment, a highly successful drive for financial inclusion led by the central bank, and the digitization of administration under the 'Digital Bangladesh' campaign led by the Prime Minister.