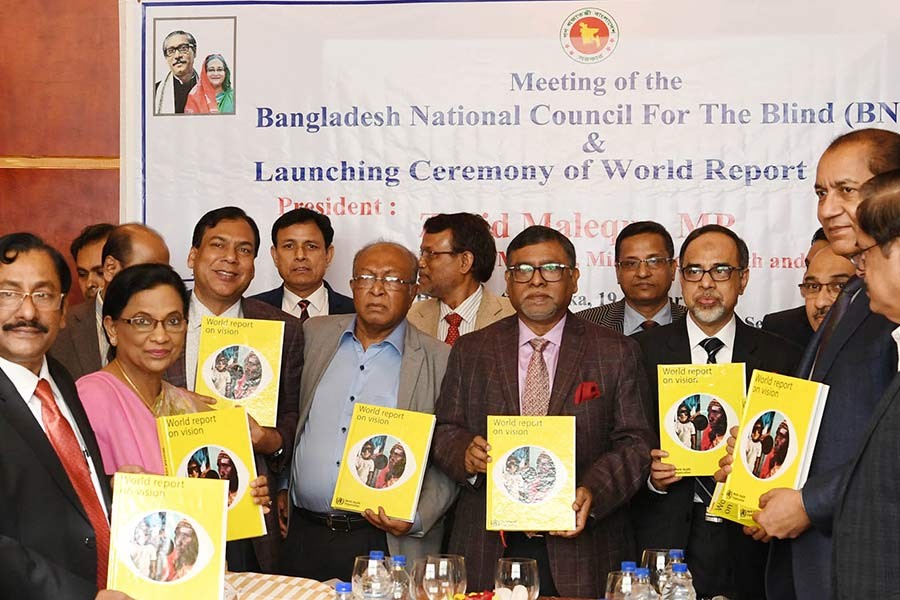 Health Minister Zahid Maleque unveiling the cover of a report, titled World Report on Vision, at a city hotel on Sunday. -PID Photo

The number of people having visual impairment will increase dramatically in the coming decades across the world due to population growth and ageing, behavioral and lifestyle changes, and urbanisation, a new report says.

Among the existing 2.2 billion visually impaired people, at least 1.0 billion people could get prevention through getting proper treatments, according to the report.

The report, titled ‘World Report on Vision’, was launched at an event in the city on Sunday by International Agency for the Prevention of Blindness (IAPB), INGO Forum in Eye Health, and National Eye Care of Bangladesh government.

IAPB represents over 100 NGOs and eye care professional organisations, which are committed to the elimination of avoidable blindness, and enjoys a formal partnership relationship with the World Health Organization (WHO).

According to the report, population growth and ageing, behavioral and lifestyle changes, and urbanisation, will ‘dramatically’ increase the number of people with vision impairment and blindness in the coming decades.

“The global need for eye care will also rise dramatically in the coming decades posing a considerable challenge to health systems,” it says.

The WHO report says, the costs of the coverage gap for unaddressed refractive errors and cataract globally are estimated to be $14.3 billion US dollars.

“These are the additional costs that would be required to the current health system using an immediate time horizon,” it added.

The minister said at the event that the rate of blindness in Bangladesh among the 30 plus age group people has declined to 1.0 per cent from 4.0 per cent with government efforts to take Bangladesh free from such diseases.”

Besides, some 4,500 physicians recently joined government service while some 5,500 doctors are on the pipeline to be recruited with aim to facilitate country’s health services.

He underlined the need to ensure modern equipments, skilled manpower, healthy lifestyle and awareness among the people to fight vision impairment.

According to the deliberations of the speakers, 750,000 people are blind in Bangladesh while the number of visually impaired people exceeds 6.0 million.

Study suggests elderly, sick most at risk of coronavirus