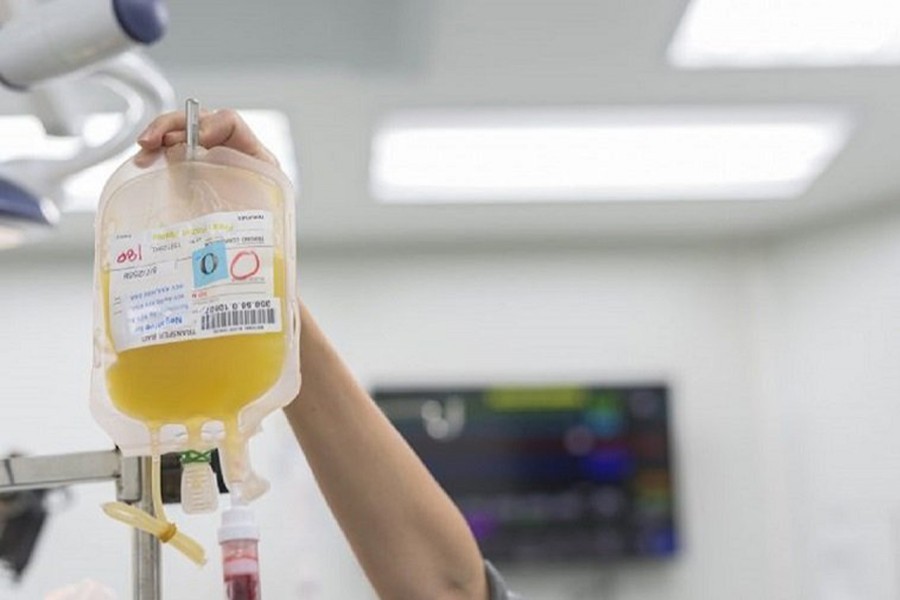 The absence of a certain guideline and a policy on use of the much-talked-about plasma therapy in Covid-19 treatment has left the therapy seekers in an awkward situation.

Against this backdrop vested interest groups have come up to fill the void and earn money at the cost of miseries of the service seekers.

Plasma therapy is something in which the blood cells of a person who has made recovery from coronavirus are collected and then injected into a Covid-19 patient's body as it is believed that the antibody that developed in the person who has recovered from the virus can help cure another patient.

A coronavirus patient in his fifties was undergoing treatment at the ICU of Anwer Khan Modern Medical College Hospital. His family members were desperately looking for a plasma donor as his condition deteriorated.

Finally, they found one Sheikh Rejaul Karim, a volunteer plasma donor, after searching different channels including  social media. Mr Karim donated plasma of his B positive blood for the patient on June 26 and a 2nd time on June 30.

Mr Karim said the condition of the patient was improving and it was a great pleasure for him to be beside someone in such a condition. But the victim's family made untiring efforts to find the plasma donor.

Maqsoodul Alam Khondaker Khorshed, councillor of ward-13 in Narayanganj City Corporation, has his team named Team Khorshed-13 working as a group of volunteers to manage plasma. The team has already donated plasma to at least 46 coronavirus patients.

Khondaker Khorshed, who himself donated plasma, told the FE that in the absence of a government policy, a large number of people were facing hassles while some others were taking the advantage of the high demand for plasma.

He along with his team organised funeral for 93 people irrespective of their religious faith or creed as the victims lost their battle with Covid-19. There was no one even family members for the last rites, he told the FE.

"We even provided money in advance but some plasma donors still did not come forward, he said sharing his experience.

"Even drug addicts with ill motives are donating plasma, as the patients' family members have no other option but to accept it as the last resort to try to save lives of their dear ones."

"One of our volunteers, whom we managed to gather by dint of our frantic efforts, donated plasma but later came to know that the physician did not recommend the plasma therapy and the patient's family just preserved it for use in future, if needed," he narrated.

There are a number of social media groups rendering 'plasma bank' services to patients and plasma seekers. They are doing it voluntarily.

But, "some unscrupulous men are making money trapping family members of the Covid-19 patients. Claiming to be plasma donors sometimes they charge money as much as they can before even donating any plasma. Once they get the money they never come back", said the councilor who witnessed such incidents during his voluntary work.

The Detective Branch (DB) of police recently claimed that bused at least six syndicates involved in swindling people out of money claiming to be plasma donors, according to media reports.

The matter came to light after one of the members of the syndicates had been arrested in Dhaka.

Those syndicates use social media to manipulate data on recovery of patients and swindle the people.

Law enforces were working to detect all the people involved in the crime.

Head of the expert committee on application of plasma therapy Dr Mohiuddin Ahmed Khan told the FE, "The therapy is needed to be allowed through a well-organised and planned Expanded Access Programme but the government is yet to put much attention to it,"

The professor of Hematology Department at Dhaka Medical College also said there is no specific guideline for the therapy, like the Food and Drug Administration (FDA or USFDA) and World Health Organization.

"As long as there is no certain policy or guideline, there will remain a possibility of misusing the therapy, and people will go for it haphazardly to save their lives as there is no medicine yet for the coronavirus treatment," he added.

Besides, "The government is yet to give NOC to import the technology to measure the antibody in the donors' blood so that it is known properly who is capable of donating and thus the proper application of the therapy can be ensured."

So, a situation of indiscipline is prevailing in the country in this area. "People are buying medicines from pharmacies" without having physicians' prescriptions, he expressed his worry.

Furthermore, some are applying the therapy to patients who have been kept in the ICU and it is not effective as proven medically, he added. He suggested the use of plasma therapy in the primary stage of Covid-19 infection.

Dr Mohiuddin, who also makes a 17-member national technical advisory committee, mentioned that they had sent a resolution with their recommendation on application of the plasma therapy, including proper documentation of it, to the health division on May 24 after holding an expert meeting on it.

Dr Ayesha Akhter, assistant director of the Directorate General of Health Services (DGHS), told the FE that there was no major development in framing a formal guideline and a policy in this connection, and the plasma therapy was allowed only on a trial basis in the country.

"Experts are still working on the recommendation provided by the technical committee. People are applying the plasma therapy as there are cases where it is giving positive results," she added.

Coronavirus impact will be felt for decades: WHO

Coronavirus may spread through air