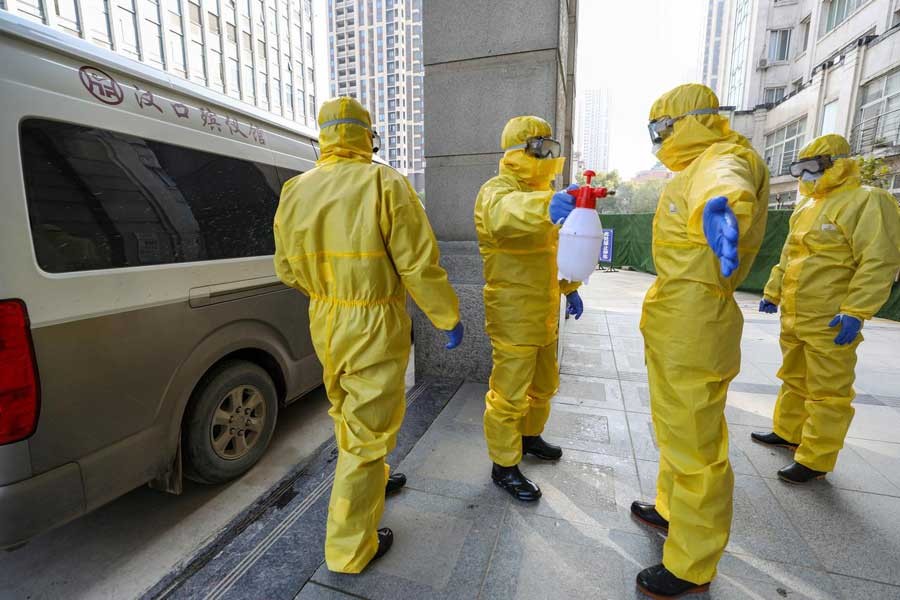 FILE PHOTO: Funeral parlour staff members in protective suits help a colleague with disinfection after they transferred a body at a hospital, following the outbreak of a new coronavirus in Wuhan, Hubei province, China January 30, 2020. China Daily via REUTERS/File Photo

Fatalities from the coronavirus epidemic are overwhelmingly concentrated in central China’s Wuhan city, which accounts for over 73 per cent of deaths despite having only one-third the number of confirmed infections.

In Wuhan, the epicentre of the disease, one person has died for every 23 infections reported. That number drops to one on 50 nationally, and outside mainland China, one death has been recorded per 114 confirmed cases.

Experts say the discrepancy is mainly due to under-reporting of milder virus cases in Wuhan and other parts of Hubei province that are grappling with shortages in testing equipment and beds.

“In an outbreak your really have to interpret fatality rates with a very sceptical eye, because often it’s only the very severe cases that are coming to people’s attention,” said Amesh Adalja, an expert in pandemic preparedness at the Johns Hopkins centre for Health Security in Baltimore.

“It’s very hard to say those numbers represent anything like the true burden of infection” said Adalja, who estimates current fatality rates are likely below one per cent.

As of Tuesday, 24,551 cases have been confirmed globally. A one per cent fatality rate would put total cases at over 49,000, based on the current death toll of 492.

Gauden Galea, the World Health Organisation (WHO) representative for China, told Reuters on Sunday that a “crude calculation” done by dividing total cases by deaths put the rate at two per cent and said the rate was generally falling.

“Trying to really demystify those fatality numbers by including mildly symptomatic cases will help people to better understand the risk,” said Adalja.

In Wuhan, some patients with milder symptoms have been turned away from hospitals in recent weeks because of the strain on resources, several people in the city told Reuters. Others have opted to self-isolate.

Wuhan resident Meiping Wang said she and her sister both believe they have mild cases of the virus after their mother tested positive, but have not been tested.

“There is no use going to the hospital because there is no treatment,” Wang, 31, said in a telephone interview.

Under-reporting mild cases - which increases fatality rates - could have a negative social and economic impact as global health authorities race to contain the disease.

“It’s good to remember that when H1N1 influenza came out in 2009, estimates of case fatality were 10 per cent,” said David Fisman, an epidemiologist at the University of Toronto, who was working in public health at the time. “That turned out to be incredibly wrong.”

“As the denominator is growing in terms of case numbers, and case fatality goes down and down... you start to realise it’s everywhere,” he said.

The global response to the coronavirus epidemic has been swift and fierce. Several countries have implemented partial or full travel bans on Chinese travellers.

“There are many actions going on all over the world that really are premised on the idea that this is a very severe illness,” said Johns Hopkins’ Adalja.

WHO chief Tedros Adhanom Ghebreyesus said on Monday that the bans were an unnecessary interruption to travel and trade.

Human testing of coronavirus vaccine to begin by Sept: J&J

Coronavirus symptoms: What are they and how do I protect myself?