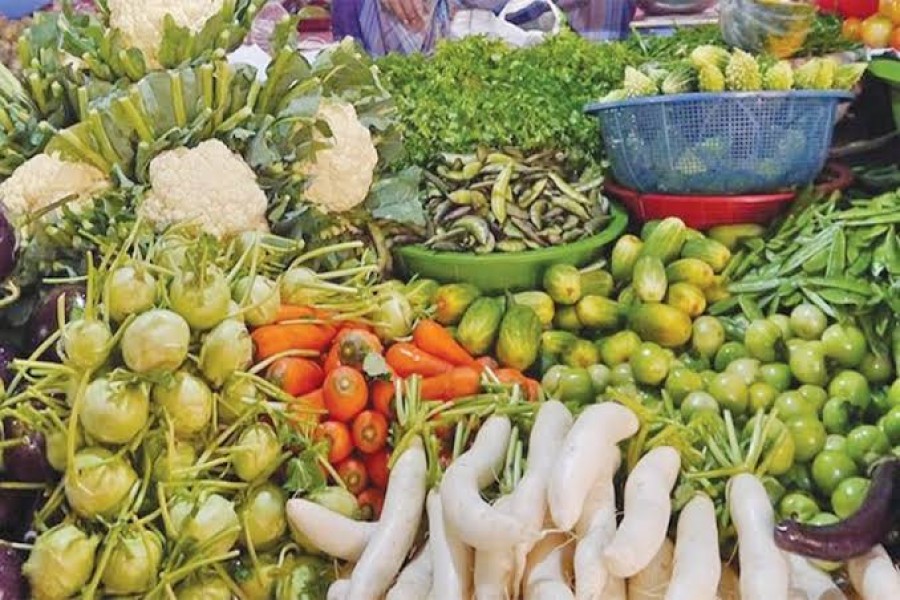 Vegetables, especially those grown during winter, have hit the country's city-based kitchen markets. As has been routinely observed every year, the season's early variety of vegetables sells at formidably higher prices -- for example tomatoes and cauliflowers. Upon increase in their supply, the prices of all vegetables stop their upward turn and slide down to a normal level. By that time, winter begins full-scale. This year, too, the vegetable markets have slowly started becoming stable, enabling fixed-income groups to purchase their favourite items.  But the current year stands out with its seemingly elusive onions -- part vegetable, part spice. With the product's local variety selling for Tk 120- Tk 135 a kg, and the imported variety for Tk 110-Tk 120  a kg, the buyers find themselves in a quandary. The price of onions at this time of the season usually ranges between Tk 30 and Tk 40 per kg.

In a bid to bring relief to the ordinary onion buyers, the government has come up with its Open Market Sale (OMS) programme selling the product at Tk 45 per kg. Market monitors call the present onion price at retailer level the second highest since November 2012. During that time, the price of the local vegetable-cum-spice, an essential ingredient for cooking Bengalee dish, shot to Tk 140 a kg. The unsavoury situation has been blamed on market manipulations at local level coupled with the stopping of onion export by a neighbouring country. The government authorities concerned have assured the public of seeing a drop in onion price in a week's time. Critics, however, point out a drawback: the departments concerned have not taken enough preparations despite the forebodings of a coming onion crisis. The hoarding syndicates promptly smelt of the deadlock over onions. And they acted accordingly by passing local onions into storage depots.

Barring the largely unexpected onion hiccup, the urban kitchen markets of winter vegetables in the country have been witnessing scenarios nearly similar to those in the previous years. This year's winter vegetable market in the country becomes distinctive in a few other respects. Unlike in the past seasons, when vast rural areas in the country are found engaged in vegetable harvests, many vegetable-growing areas remain inactive in the current year. It is chiefly the tracts which were not affected by the last flood which have ventured into vegetable cultivation. Lots of areas remaining under flood water for weeks in a row could not grow even a single variety of vegetables. The areas include parts of south-western, northern and north-eastern regions of the country. This situation is feared to allow the flood-free and vegetable-producing rural areas to enjoy monopoly of sorts.

As per reports coming from different parts of the country, farmers are awaiting a bumper production of various types of vegetables by the time full winter sets in. They look forward to earning hefty profits from their sales. But the cautious sections of them have already started becoming wary of the market-related machinations resorted to by middlemen. In spite of a bumper winter vegetable production, the growers fear they might be deprived of their due profits. The agricultural authorities ought not to turn a blind eye to this great disincentive haunting farmers. On the other hand, the farmers' practice of growing vegetables and different types of spinach should also be kept under monitoring network. The allegations of excessive use of insecticides, chemical fertilisers, preservatives etc in the farming stage have long been rife. It also warrants deterrents for the sake of public health.