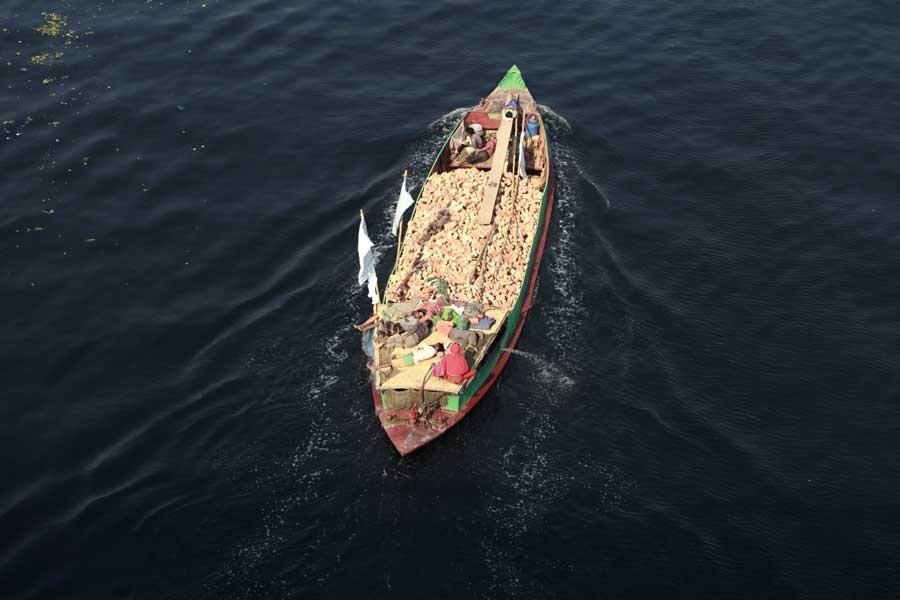 The headlong plunge the reputation of the Buriganga has taken finally puts it in the category of one of the world's most polluted rivers. In the process, its notoriety has increased manifold in terms of the day-to-day use of its water and navigation. At the same time, the river's deteriorating condition has continued causing the conscious segments of the people to reach an ominous conclusion: the vital river may fall in disuse. The worry stems from the fact that the country's capital Dhaka stands on the Buriganga. Letting the river die out amid an atmosphere of apathy and reckless abandon brings to mind many such rivers in the least developed countries, many of them in South Asia.

Like the rivers in general in the southern part of Asia, the Buriganga passes through a vibrant phase in its water-flow during monsoon every year. This period witnesses the river in a sprightly state, its water becoming free of the filth and stench, large water vessels plying with the increase in the river's navigational depth and width, leisure-seeking people moving about on country boats in the evening and many other pleasant scenes. The period is short-lived. With the monsoon rains gone and the current slowing down, the river reverts to its original form filled with sewage sludge and industrial effluents. The Buriganga has been offering this muck-filled look for nearly four decades. The river's water has been declared unfit for the survival of aquatic organisms. It has long lost its drinkability, and usability at domestic level.

Perhaps few rivers in the world have prompted a country's High Court to intervene in the job of making those properly function. Upon failing to elicit positive response from the authorities concerned in the form of anti-pollution measures, a writ was filed in 2010 on behalf of the Human Rights and Peace for Bangladesh (HRPB) with the HC. The petition sought effective directives from the court. Accordingly, the HC came up with a 3-point directive in 2011. It comprised asking the relevant authorities to take urgent measures on stopping dumping of industrial wastes into the river, as well as disconnecting all sewerage and effluent lines ending in the river in six months. Given the fact that little remedial steps have been taken in this regard, the HRPB submitted a second appeal to the higher court subsequently. It was followed by a court directive to let it know about the progresses made by the agencies concerned in taking the corrective steps vis-à-vis the Buriganga.

It's heartening that the High Court has put into effect a recent directive to the Directorate of Environment to close 27 entities having no permission to operate on the Buriganga's bank. One reasonably hopes that this action will have a positive impact on the project of freeing the river of all kinds of encroachers and polluters. The said industries include mainly dyeing and other factories, the effluents of which play a great role in the pollution of the Buriganga. The various types of pollution and encroachment have literally begun choking the river to near-death. A similar fate awaits the other big and small rivers that surround Dhaka city. Few cities in the world are fortunate to have had 4 to 5 five rivers flowing on its peripheries. But to what avail? Being oblivious to this blessing of nature and neglecting it might mean it's we who invite calamities for us --- and nonchalantly at that.