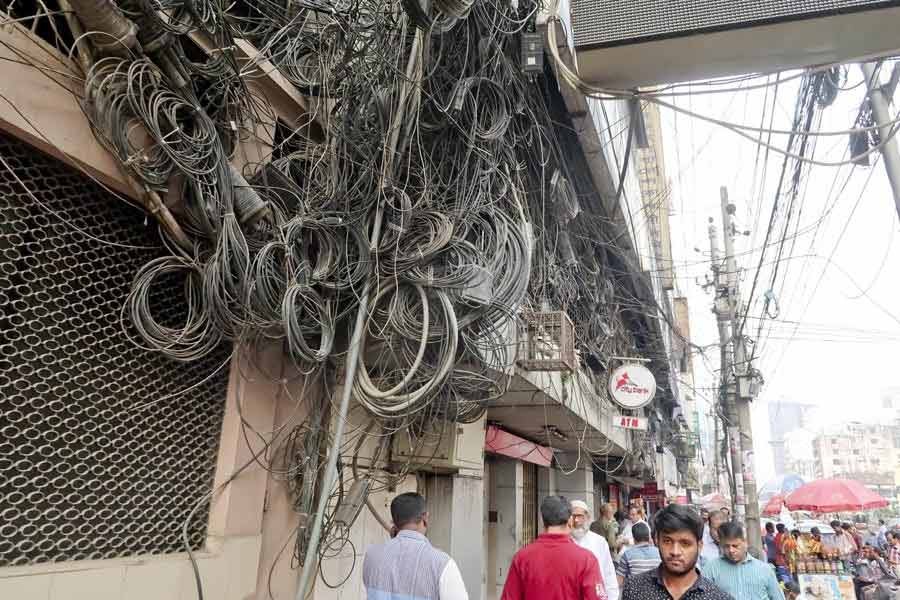 No one in his right sense will dispute the fact that overhead wires and cables, those too jumbled together at some points, of various service providers - both public and private - are an eyesore. Hanging loosely from electric or other poles some of those can even cause fatal accidents. An alternative to this arrangement is laying an underground network of all wires and cables as followed in cities of the advanced countries. At the time of announcing budget for the Dhaka South City Corporation (DSCC), its mayor made his intention clear that the corporation wants to do away with the ugly bunches of overhead cables in the interest of the city's beautification. From August 5 last the DSCC was scheduled to embark on a drive to snap television cables and internet wires. Over the past few days, according to a report carried in a Bangla contemporary, more than 50,000 internet connections were snapped in several areas of Dhaka south including Dhanmondi, Kalabagan, Gulistan and Fulbaria. More TV-cable connections may have been a casualty of the drive.

Ideally all cables and wires should run underground not only for the sake of keeping the roadside view free from their tangled ugliness but for safety reasons. But when the electric wires - potentially more hazardous than any other - hang overhead and exposed, this drive will be considered preposterous by most people. Only more so when its consequences have proved disastrous for students, stay-home officers and employees, online traders, call-centre operators, self-employed outsourcing youths and many others at this time of pandemic. Students from secondary to the tertiary levels have been participating in online classes in order to make up for the losses of lessons on account of prolonged holidays of educational institutions. If 50,000 connections were snapped, many times more students, office workers, traders and others using internet for livelihoods may have suffered the ill consequences. For many others, internet offers a window to the world outside as they stay home and struggle to release the psychological pressure off. Also, people were deprived of services like telemedicine.

Many complain that there was no prior warning or notification in the areas where the drive was conducted. Those who had to submit assignments on an emergency basis were in trouble. Students tried to make do with internet data purchased from cell phone companies but the problem is that the speed is too slow to run youtube on cell phones. Moreover, the cost is exorbitant. Before taking the decision for removal of overhead cables and wires, all these highly important issues should have been taken into consideration.

The city allowed the proliferation of tangles of cables for decades, now those cannot be removed overnight. There has to be a comprehensive plan to do the job. Without making a provision for an underground network of cables and wires first, how can one embark on such a drive? This is capricious. The subscribers of TV channels and internet are not to blame. Now they cannot suffer for no fault of theirs. Neither law nor common sense dictates such an arbitrary treatment to them. The drive should immediately reviewed, fail-safe route taken and the snapped authorised connections restored.