Shiny path for business ahead 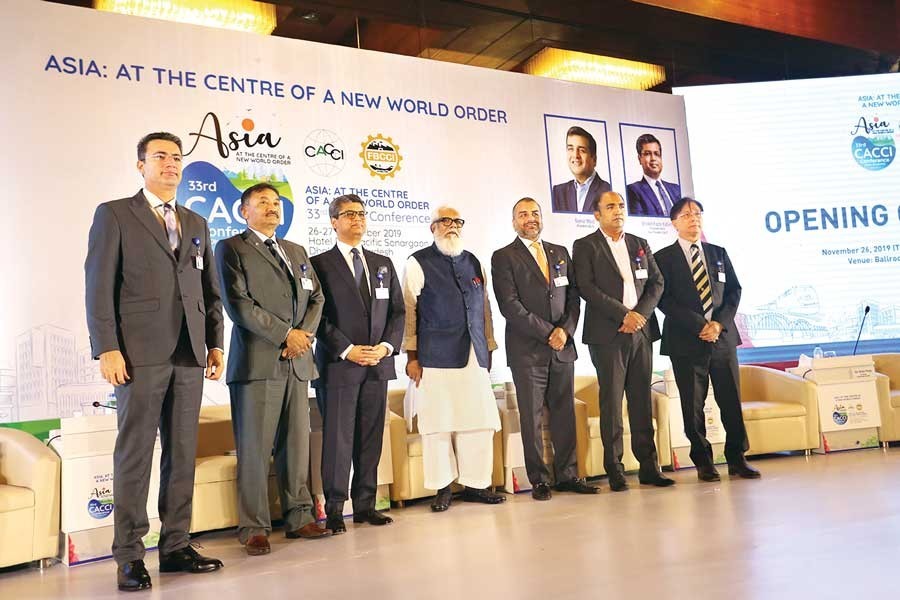 The two-day conference of the Confederation of Asia-Pacific Chambers of Commerce and Industry (CACCI) jointly organised by the Federation of Bangladesh Chambers of Commerce and Industry (FBCCI) and the CACCI that concluded in Dhaka last Tuesday was marked by an air of confidence the participants exuded in their economies' future. That the Asia-Pacific region would be the engine of growth of the world economy was sounded as a matter of faith, it seemed. The underlying fact behind the confidence is the region's fast economic growth underpinned by the location of some very big economies of the world and some emerging tigers. Apart from the really big ones like China, Japan, India and South Korea, emerging tigers like Indonesia, Malaysia, Taiwan, Thailand, Vietnam, Singapore and definitely Bangladesh are in the area. The CACCI conference called for among other things closer cooperation among the economies of Asia and the Western Pacific. 'Asia at the centre of a new world order' has indeed been the right call of the conference. The chambers represented in the meeting covered vast areas and topics of the world economy during the two days of deliberations. That Bangladesh hosted such a high-profile meeting goes to prove and show its willingness to be part of it in a more meaningful and dynamic way. The Prime Minister's Investment Adviser Mr Salman F Rahman's engagement in the event demonstrated the government's desire to be part of a global march towards the much touted progress. Bangladesh's main interests are in agriculture, industry and energy as told by the PM's Adviser.

Being the engine of global growth means a lot of things, foremost being placement of all institutional issues in a proper angle and assurance of the highest level of good governance. While our labour force working abroad has earned plaudits, the inner country scenario remains not that encouraging. That coupled with the performance of the banking sector and a not-so-resolute loan-default paradigm make things difficult at home. However, the call echoed in the meeting that businessmen of the area should come closer and build bridges of cooperation and interaction is indeed the need of the hour. Digitisation has been mentioned as a pressing necessity and shaft of advancement. That more attention has been given to the digital areas is exemplified by Bangladesh's case where there are 160 million mobile phones in use and over 90 million internet users. The conference's assertion that there was no magical way to entrepreneurship must be kept in utmost consideration.

Among this entire shining scenario, the US-China trade war poses some bit of anxiety. It has to cool down and settle some day. Whether other countries of the Asia-Pacific region would gain from the tug of war between the top two is not proven. Besides, there is the Brexit shadow in Western Europe which poses a threat of sorts to Bangladesh also. Studies should be done in the right earnest whether the trade war or Brexit is to what extent harmful or otherwise for Bangladesh. The Finance Minister Mr AHM Mostafa Kamal has given the assurance that given Bangladesh's sound economic base, trade war would not affect the economy. The call echoed in the meeting that businessmen of the area should come closer and build bridges of cooperation and interaction befits the need of the hour. The lessons and discussions of the two-day sessions should have given a fillip to the thinking of the Bangladesh business community. As the FBCCI can take due credit for hosting the meeting, its next task now should be to discern, analyse and suggest what is to be done by the Bangladesh business community.