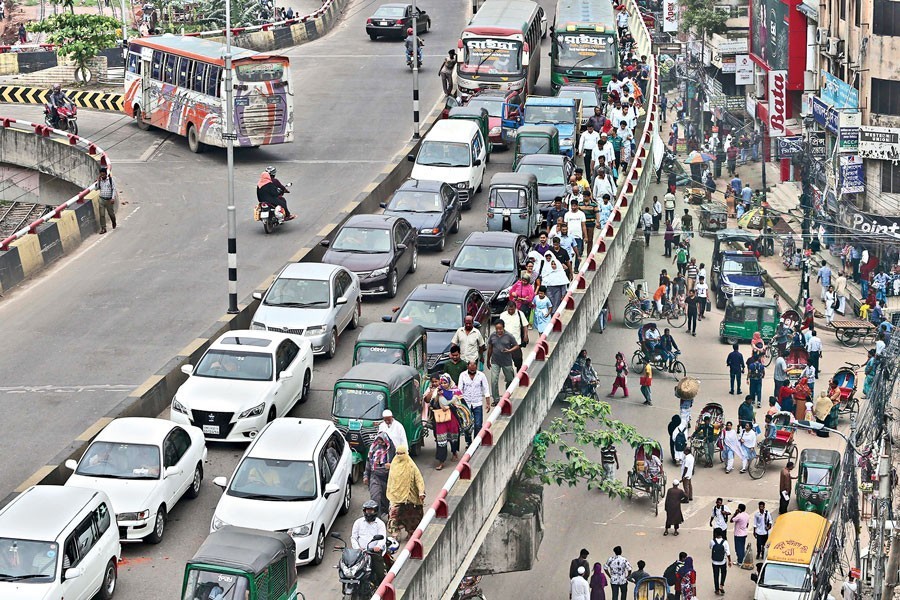 Road safety concerns centring on the Eid are nothing unusual, as the movement of people and motorised vehicles goes up remarkably during pre and post-festival days. Some 323 people were killed and 622 others injured in road accidents during Eid last year. A rights body, the Bangladesh Jatria Kallyan Samity (BJKS), that promotes passengers' genuine causes fears an even worse situation this year, mainly because of an influx of a huge number of motorbikes and easy-bikes during the last couple of years when the Covid-19 pandemic reigned supreme.

The BJKS has come up with a few statistics that should be enough to stir up worries. It says between 2.0 and 2.5 million motorbikes are likely to ply the country's highways during the Eid festival days. Motorbikes are likely to engage in 1.2 million trips from Dhaka to its adjoining districts. The number of ridesharing, according to Samity's projection, will be between 2.0 and 2.5 million. Though the rights body has not quoted the source/s while dishing out all these statistics in its statement issued early this week, few would doubt the enormity of the problem.

Motorbikes, that have proliferated in recent years, were responsible for half of the road casualties during the Eid days last year. The presence of more motorcycles and easy bikes, thus, raises the chances of increased road accidents during the upcoming Eid celebration.

The reasons behind the plying of a huge number of motorbikes and other locally made motorised vehicles during the pre-Eid days are not that difficult to locate. Home-bound people are forced to avail ridesharing services because of the shortage of passenger buses, train tickets and long tailbacks on highways. Motorbikes manage to reach destinations bypassing all the obstacles on the roads, even though a swarm of motor and easy-bikes to contribute to the formation of long tailbacks on roads and highways.

Understandably, the government cannot stop issuing licences to new motorbikes. But it surely can regulate those, if it desires so. The problem lies with the relevant agencies' willingness to enforce laws and rules made to ensure smooth movement of transport, be it during normal or festival times. Motorbikes have emerged as an enormous problem, in terms of rash driving and breaking of traffic rules. Yet controlling those seems nobody's business. Ridesharing has been going on uncontrolled, leading to many unpalatable developments. Ridesharing motorbikes are now seen crowding every street corner of the city.

Similarly, the number of easy bikes has been growing unabatedly, making the roads and highways even more unsafe. The country's higher courts have barred the easy bikes from plying the highways. But that order is hardly being complied with. Not just easy bikes, even so-called 'nosimons' are also found moving freely on the highways.

The very thought of traffic situation, be it in Dhaka or outside, generates a chaotic picture of the extreme kind. Such chaos is nothing unexpected when the government adopts new law after many years to ensure smooth transportation, but shies away from its enforcement under threat from vested quarters. It is high time the government started disciplining the transport sector with a heavy hand. Otherwise, the country would have to pay an enormous cost in the coming days.