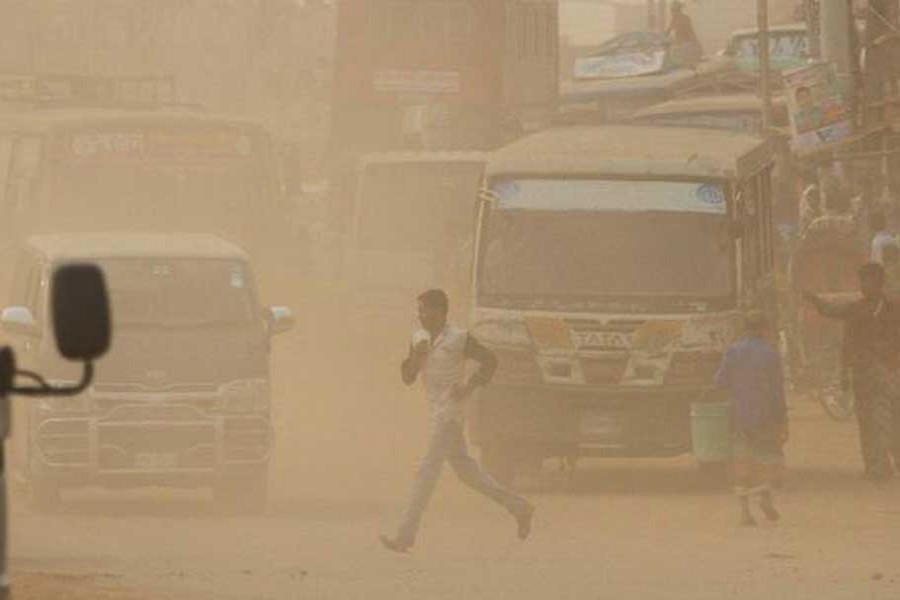 Of the many previous reports related to the fast worsening of air pollution in Bangladesh, the latest one is highly alarming. It comprises the shortening of the average life expectancy of Bangladeshis by 6.9 years. The new study calls Bangladesh the world's "most polluted country". The results of the analysis blame the non-stop air pollution for the situation. It has found some areas in the country, including Dhaka, being in situations much worse than average. It says this air pollution cuts lives short by nearly nine years in Dhaka, the most polluted city in the country. The depressing piece of news comes from the University of Chicago's Energy Policy Institute contained in its latest Air Quality Life Index (AQLI).

Even four to five decades ago, Dhaka used to be recognised as a city having a tolerably pollution-free atmosphere. And the country as a whole, dependent on agriculture and nestled in a rural sylvan environment, still remained out of reckless urbanisation. In terms of atmospheric purity, it stood in stark contrast to the frenziedly developing India and some of its major cities. In a weird change of course, Bangladesh had to jump on the bandwagon of unplanned industrial development --- and thus opening the floodgate of air and water pollution of varied kinds. Finally, the worst form of the environmental scourge lingered on to plague the lives of people in capital Dhaka. Global surveys couldn't wait longer to declare Dhaka as the most polluted city in the world. The plight of the densely populated and recklessly industrialised Bangladesh capital kept deepening.

According to the new study, in Dhaka, air pollution is significantly higher than the national average of 88.9 micrograms per cubic metre. It leads to the Dhaka dwellers losing more than eight years of life expectancy on average. In the second-largest city of Chattogram, residents are losing 6.6 years. The researchers have homed in on hazardous floating particles that damage the lungs. There is, however, an upbeat piece of news. According to it, in no region in the world is the opportunity for improved health and life expectancy greater than in South Asia. The region includes four of the five most polluted countries in the world. The AQLI data show that the average person in Bangladesh, India, Nepal and Pakistan  would live five years longer if pollution levels were cut down to meet the guidelines specified by WHO. It's now clear that South Asia in general has lately occupied the prime focus. Due to the region's high population and pollution concentrations, it accounts for 52 per cent of total life years lost globally due to particulate pollution going past the guideline of World Health Organisation.

As has been detected by the revised satellite-supplied  PM2.5 data, Bangladesh had pollution concentration of 75.8 micrograms per cubic metre in 2020. It meant 13.1 per cent increase in pollution during a year, when Covid-19 lockdowns were in place. Surprisingly, while during this period the pollution level marked a significant increase over the 2019 level of 67 micrograms per cubic metre, pollution in Bangladesh remained consistently high over the past decade. Given these facts, the data on the increase in air pollution point the finger at Bangladesh. As it explains, while India contains the most polluted air in some of its regions, Bangladesh remains in place as the most polluted country in the world. Conclusions like this come from global pollution watchdogs. Mere ruing will not help. For its unbridled air pollution followed by reduced life expectancy, it's the country itself which has to pay the price by exercising self-restraint.