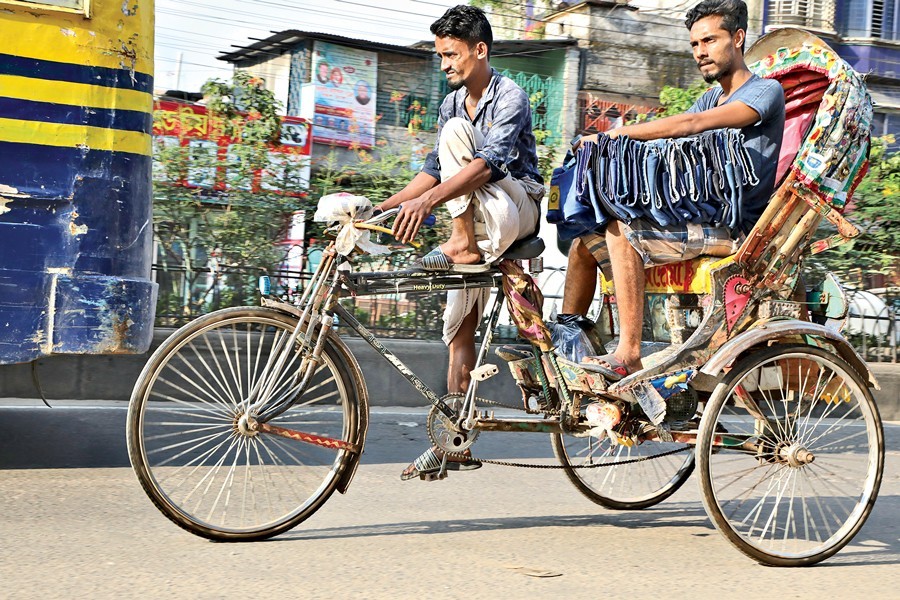 Although the so-called battery-run rickshaws have long been singled out as culprits behind recurring accidents, some fatal, they continue to ply the Dhaka streets with their typical defiance. They have naturally drawn the ire of the road safety movement activists since they began operating in the capital. The government on occasions declared them unlawful, apparently to little avail. The mechanised cycle-rickshaws kept moving allegedly with the backing of irresponsible quarters. But, had there been no all-out operations by the law enforcers following a 2015 High Court ban on their plying across the country, the mechanised three-wheelers would have swarmed the city streets. The HC observed that these vehicles had no proper licences.

Improvised in nature, these cycle-rickshaws operate on power from electric batteries. The hazard they pose is centred on their inability to apply brakes on once picking up speed or slow down on emergencies. Many tragic accidents have been caused by this mechanical limitation of the battery-run rickshaws. Moreover, these tri-cycles are generally operated by drivers who also pull traditional rickshaws -- at times flouting traffic rules. Thanks to the announcement made by the Mayor of Dhaka South City Corporation (DSCC) Sheikh Fazle Noor Taposh on taking legal action against these risk-prone vehicles, the hazardous rickshaws have drawn attention of all once again. The safety-conscious rickshaw passengers hope the mayoral promise will take effect with the urgency which it requires. Several times in the past, the city corporations and the traffic police underscored the prime need for freeing the capital of the mechanised rickshaws and vans. Their order of prohibition also targeted the dilapidated, unsightly and unfit vehicles. It had been found that a considerable number of road mishaps involve these transports.

The sad aspect of the episode is, upon being driven out of Dhaka's main roads, the unfit vehicles were found plying the streets on the city's fringes. Following suit, these rickshaws found the city's peripheral roads, especially those in old Dhaka, ideal for their movement. A lot of them have chosen the neighbourhood lanes and alleyways as their routes. Due to their unwieldy speed and lacking in speed control device, collision with other vehicles and hitting pedestrians at random emerged as a regular feature in the large and small neighbourhoods. As these areas lie virtually outside traffic police surveillance and people are obsessed with speed and haste, there is no way to stop the recklessness of these vehicles. It is imperative people realise that life matters more than travelling hazardously by mechanised three-wheelers. Sadly, there are few who can make people understand this truth.

The stealthy movement of battery-run rickshaws on the mid-city roads during the recent corona shutdown spoke of their desperation to earn some extra money. The act had been declared illegal on the main roads. Now that the capital is slowly returning to normal, the estimated 30,000 to 40,000 mechanised rickshaws ought to abide by the law governing them. But the drivers should also be given openings to alternative livelihoods.