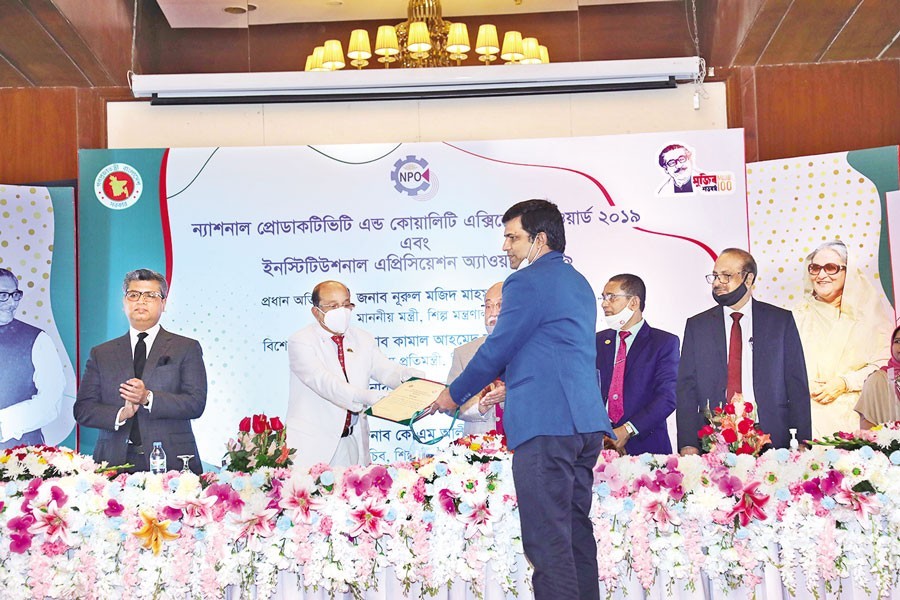 Dubbed the National Award for Productivity and Quality Excellence, the recognition to be conferred on 26 manufacturing firms makes a bold statement in favour of the progress made so far by the country on the industrial front. That the country's import still outstrips export, yet to be diversified reasonably, by a wide margin also makes a strong case for encouraging consolidation of local industries' footholds and enhance their capacity for employment. The tendency here is to do business rather than setting up industrial plants for production of both conventional and unconventional goods and commodities. Of late, a handful of companies have come forward not only to produce high quality consumer goods for local consumption but also to go for export to as many countries as possible. Unfortunately, one large electronic appliances producer was not considered for the award.

If a vigorous drive for expanding the horizon of industrial entrepreneurship is a criterion, the electronic company cited above and a few others could perhaps won the award. Investment in industries certainly is, by nature, fraught with risks. Not many are interested in laying their money in risky ventures but those who do are the real pioneers. They are not averse to take risks because creativity and innovation are their guiding force that gives them the extra conviction needed for success. When beverage companies ---be they national or international --- are given the excellence award, how the criteria have been set is not quite understandable. In the same way, malted drinks which mislead people, the young ones in particular, by carrying colourful advertisements on electronic media undermine the basic health guidelines. In one such advertisement, when two boys with their school bags hanging from their backs converse about the nutritious value of different vegetables including spinach, one of them shows a five-taka coin on his palm, which can buy the equivalent of all the vegetables' nutrition. How outrageous!

Awarding such food and beverage companies can by no means do justice to what is called national excellence much as they may contribute to the economy by sales proceeds and the revenue paid. Even the artificially flavoured juices are suspect so far as children's health is concerned. It is better not to encourage such drinks and processed foods. It would be wise to focus on safe foods because here is an issue that has remained awfully neglected in this country. Agriculture farms and companies unwilling to compromise on quality of produce and products should be patronised as much as they need and rewarded for their efforts.

The next most important criterion for winning rewards in the industrial sector ought to be innovation suiting to the local need. One of the highly fruitful exercises is collaborative venture involving industries and the highest seats of learning. Sponsorships of projects and programmes by private-sector conglomerates can make use of the young creative talents. When school students can successfully make robots capable of speaking and performing a few automated services, there is no dearth of innovative and ingenious minds in this country. The need is appropriate infrastructure and opportunities for the young talents to prove themselves. After all, it is the minds or human resources behind machines that speed up a country's development.