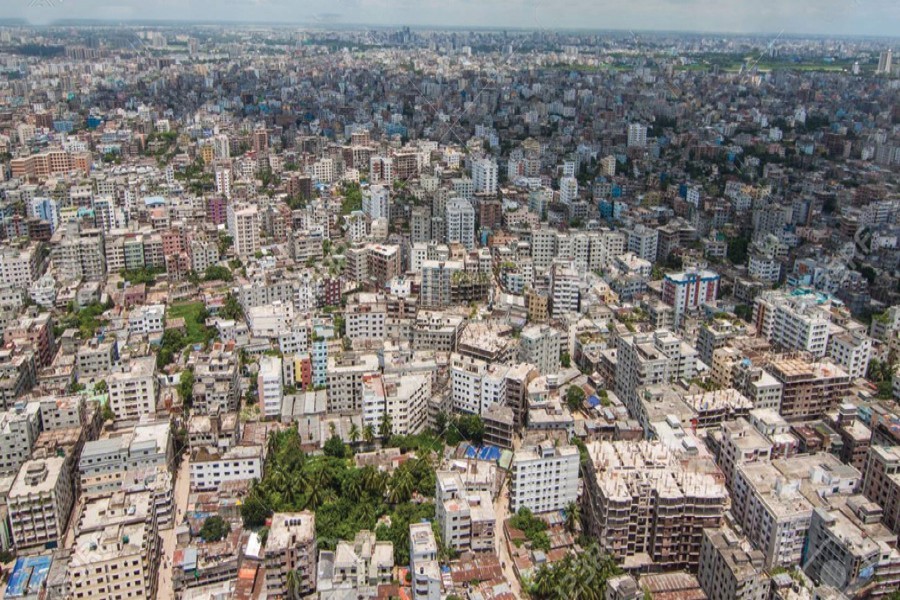 That Dhaka city has long turned into a veritable concrete jungle is a common complaint. But how grave the matter today stands has been brought to the fore by a study titled 'Air, Environment and Liveability Context of Dhaka City' by the Bangladesh Institute of Planners (BIP). Just two decades ago (in 1999) the city's concrete covered area amounted to 64.99 per cent but in 2019 this increased to 81.82 per cent. Given the construction spree of buildings and other infrastructure on any available space -government or private, an apprehension of pushing the concrete cover to anywhere around 90 per cent cannot be ruled out. Clearly, the city as a whole is posing to be claustrophobic. Its liveability will suffer further with the unplanned physical growth it has been compelled to go through. No wonder the city's open space has reduced to a critical proportion of 4.61 per cent from 14.07 per cent and 7.8 per cent in 1999 and 2009 respectively.

However the crisis of breathing space is not the only bane it is grappling with, its water bodies have nosedived to just 4.38 per cent from 14.25 per cent of its total urban area over the past 20 years. If a mega city like Dhaka loses its flood plains or low-lying areas around it at this rate, it is only natural that the capital will never be able to free itself from water-logging whenever it rains even modestly. The twin problem of depletion of underground water and loss of water bodies and channels that once used to drain out rain waters from the city will continue to encumber the city roads and make life miserable for its inhabitants. The Bangladesh Institute of Planners (BIP) has rightly suggested retention of the existing water bodies and at the same time demanded reclamation of the ones grabbed by different quarters.

The only silver lining -albeit subdued -was the gain in the city's greenery which witnessed an increase over a decade from 6.69 per cent in 1999 to 9.29 per cent in 2009 but unfortunately by 2019 it dropped slightly to 9.20 per cent. When the rest of the country has been achieving remarkable success in social forestry, Dhaka city has remained somewhat laidback to the enthusiasm for tree plantation. Sure enough, the city still has spaces particularly on roadsides to plant trees that can add not only to its beauty but also help improve its environment. In London urban planners and environmentalists have created boroughs of greenery that can facilitate flow of fresh air.

The way the city is getting strangulated indicates that an urban disaster is waiting to unleash its destructive forces. It is time the policymakers came up with some radical and bold step to help the city recuperate its health. Without its recuperation, its inhabitants cannot expect to live well. The BIP has suggested tree plantation around all the water bodies and also creation of a green belt all around the city. Sure enough, the war against the brick kilns has to be brought to its logical end and more open spaces with green surroundings developed for the benefit of each area.