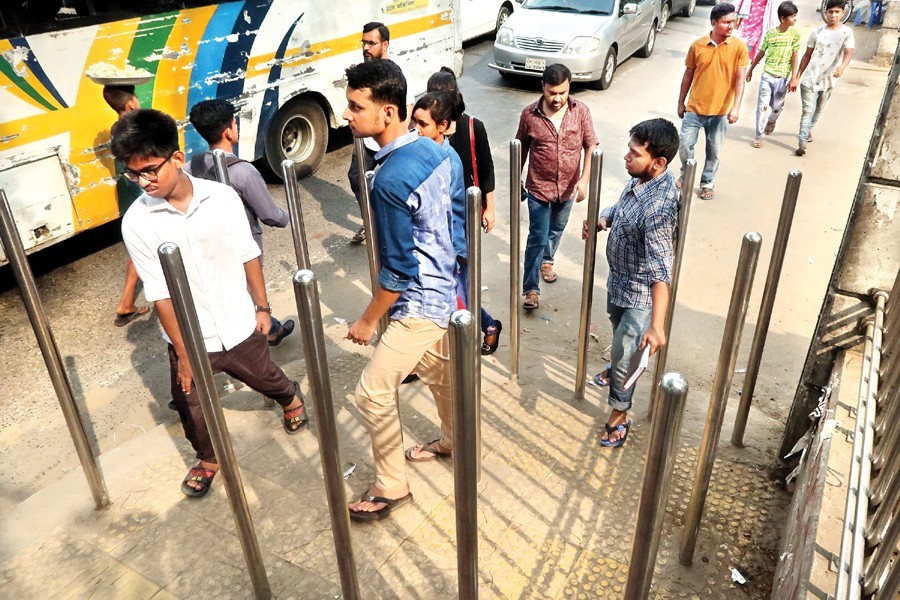 The blatant acts of encroachment of roads and walkways taking place in many areas in greater Dhaka do not at all bode well for the city dwellers. All the spaces in question are public places -- like a stretch of a vital road along the Gulistan Building. Last week, a face-off ensued over parts of an illegal market and commercial set-ups constructed at Savar on the two sides of Dhaka-Aricha Highway. The apparently massive task of eviction and dismantling of around 500 unlawful structures beside the highway was being carried out by the Roads and Highways Department authorities. A similar campaign around the same period by law enforcers to demolish illegal shops beside the railway track in Karwan Bazar has underscored the need for continuing the drive. Many would feel tempted to dub the evictions and demolitions in the capital and the nearby highways a tip of the iceberg. Elements of déjà vu may also overtake a section of the city's old residents. It's because after the evictions, the same old scenes are seen in place.

Anti-encroachment campaigns, their seemingly unrelenting nature and the encroachers' tactful return have long been well-known spectacles in Dhaka. Bursting out in protests against the authorities' actions is a new development. And scuffles between the protesters and the law enforcers have lately emerged with all their ominous prospects. That a section of government-land grabbers can muster the audacity to take out protest marches and, even, launch attack on the law enforcers points to a highly unsettling fact: they enjoy the blessings of strong local backers. Some illegally occupied highway-side lands are entangled in legal disputes, made complicated by the phony owners. They manage to keep the lands under their occupation by whatever means possible. In short, they won't let go of their possessions. On the other hand, the government agencies this time may not budge like in the past.

A grim aspect of the whole episode is few patches of the grabbed lands could finally be recovered. For instance, encroachment on rivers is carried out with no intention of losing one's ownership. As has been seen over the decades, river shores once grabbed are fated to become individual properties. All powers of the relevant agencies and authorities take a back seat here. On the other hand, the application of law in reclaiming the encroached lands ends in a futile exercise, since the fate of the land grabbers and the helpless public is dictated by the pervasive presence of vested interest quarters.

Against this backdrop, the intermittent encounters between the pavement hawkers and law enforcers aided by city corporations emerge as an urban scourge that goes parallel to the larger land-grabbing cases. Of Dhaka's present footpath-grabbing flashpoints, the one in Gulistan has long stood out as the most dreadful. It has gobbled up the entire length of a road connecting Golap Shah Mazar and Gulistan intersection. Due to the veritably non-stop cat-and-mouse game between the hawkers and the police, with the latter becoming apparently exhausted, the former seems to be holding sway finally. The power-wielding capacity of the previously pavement-based vendors has reached such an extent that they have begun running their open-air businesses occupying the whole breadth of the road. Almost a similar picture is encountered in the New Market-Gausia and Farmgate areas. Giving in to protests organised by the affected hawkers after eviction drives, and looking the other way when they start coming back will not bring any lasting solution. The need of the hour is designating places for footpath vendors.