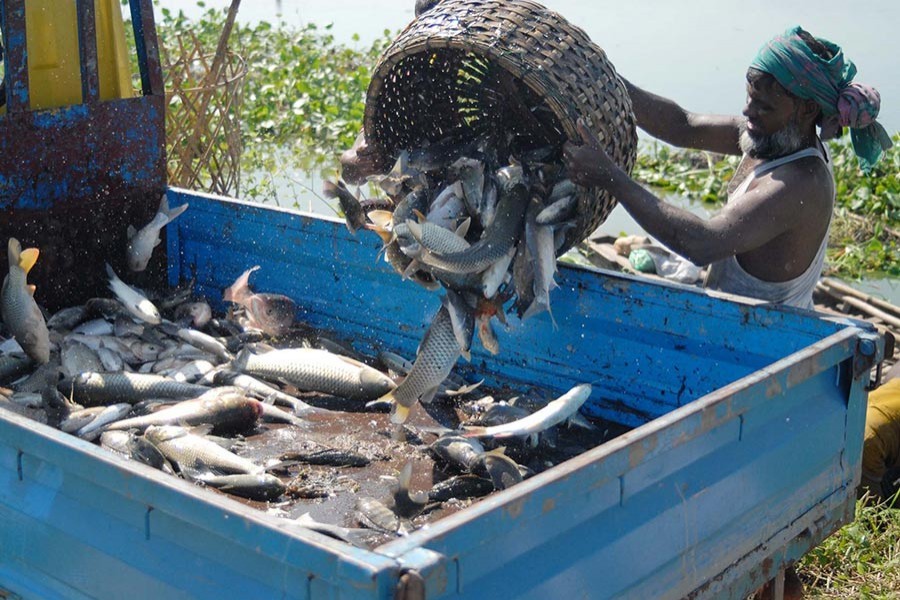 That the country's fish farming has grown substantially over the years earning it third position in global ranking is more than just soothing. The multiplier impact of fish farming on the economy in terms of employment and income generation of rural population makes it a fitting case for poverty alleviation. According to a report of the Food and Agriculture Organisation (FAO), Bangladesh now is next only to China and India in farm fish production - a two notch progress from fifth position last year.

Fish production in the country increased in the past two decades driven mainly by aquaculture, which primarily relies on farming in ponds. Commercial pond fisheries became a major source of fish production since the early 1990s, benefiting from highly productive and profitable aquaculture fish varieties. Market for farmed fish has also reportedly grown by a massive 25 times over the last three decades. A study report of the Washington-based think tank International Food Policy Research Institute (IFPRI) made an interesting observation while reviewing the Bangladesh fish farming sector: More than two million people out of the approximately eight million who moved out of the poverty trap during the last decade were directly facilitated by aquaculture. In other words, it is the role of fisheries in food security that makes this sector so uniquely distinctive. Contrary to the assumptions that nutrient-rich foods will remain out of reach for the poor, the success of fish aquaculture in Bangladesh shows how nutrient-rich food can become more widely available for all, the report said. Citing the use of modern fish varieties, improved farming practices, and expansion of road network to rural areas and increased telecommunication access, IFPRI says aquaculture's transformation has been driven by improved technology, reduced transaction costs and value-chain innovation. The government did play an important role in the initial years, but lately it is primarily the private initiatives that have helped the sector thrive. While there is the need for continued government support to sustain the growth of the sector, non-government organisations (NGOs) should also be more forthcoming to make it more vibrant.

Fish farming in Bangladesh is no longer a subsistence occupation. What is more, it has attracted a range of backward and forward linkage business ventures -- that too in rural areas all over the country. There has been a proliferation of feed mills and hatcheries, drawing small- and medium-scale investments.

Observers feel that given the present scale of fish farming and prospects of further growth, the country has excellent potential for export also. Sweetwater fish farmed in ponds can be expected to capture a sizeable share of the global market-an example that has been so successfully set by Vietnam. The government should facilitate the process. There is also the need for increased credit financing. The existing farm loan policy of the government should be suitably recast to target fish farming as a highly deserving sector.