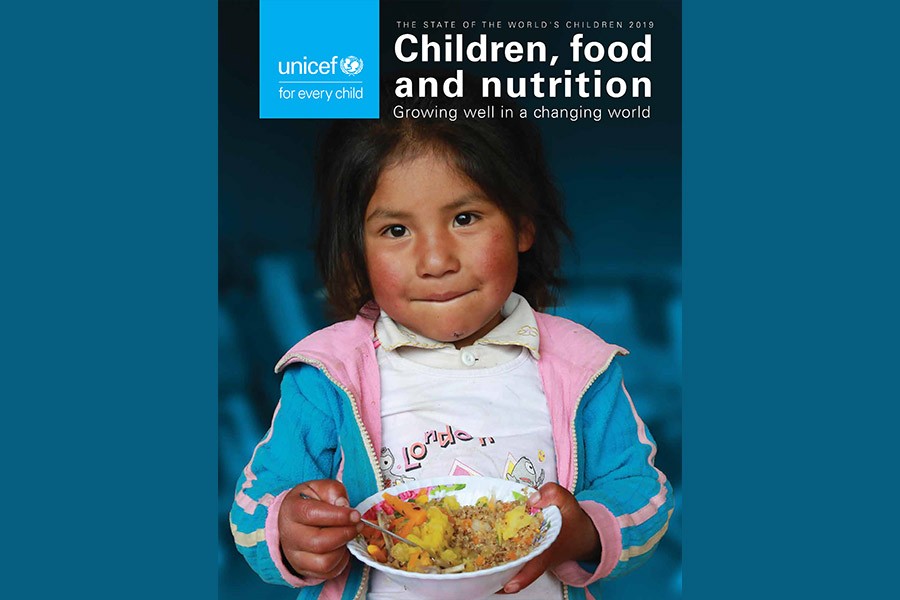 The cover page of the UNICEF's report titled "THE State of World's Children -2019 --Children, food and nutrition: Growing well in a changing world"

A  United Nations Children's Fund (UNICEF) report paints a bleak picture for at least 19 million of children in Bangladesh on account of climate change. Notwithstanding the marked improvement in reducing child mortality at birth or before the age of five, one-third of children in this age group are malnourished and 'two-thirds are at risk of malnutrition and hunger because of the poor quality of their diets'. The country's self-sufficiency -a remarkable achievement --in food has been well recognized by international agencies and the world community but it is also true that this achievement has not been matched by improvement in the quality of food. The policy-makers and the conscious segment of society have started paying attention to this lacking in food intake lately. However, the majority of the people are not equally aware of the nutritional deficiencies. At the bottom rung of society the struggle concerns procurement of enough foods for families -quality notwithstanding.

Now the UNICEF's report titled "THE State of World's Children -2019 --Children, food and nutrition: Growing well in a changing world" focuses on the elements of vulnerability of children to consequences of climate change. Some of the climate-induced natural disasters have already taken effect on children's well-being by this time. For example, drought, flash floods and river erosion have either caused crop losses or forced people to seek shelter in city slums where children are the worst sufferers. Extreme hardship on the part of the earning members of families is not proving enough to manage nutritious foods and children are compelled to fend for themselves when they should have been in school. The result is stunted growth and wasting of such children. As many as 58.7 million infants under the age of five were found stunted and 25. 9 million children were wasted in South Asia alone.

What compounds the problem are the unhygienic condition and environment in which slum children grow up. They fall easy prey to diseases like diarrhoea, hepatitis, cholera, dysentery, typhoid, dengue and chikungunya. Even those who survive attacks of such diseases find it difficult to recuperate in the absence of care and the extra nutritious foods they need. What the UNICEF report has not mentioned is the adulterated or contaminated foods people with poor purchasing power are impelled to buy. Obviously, such foods do more harm than good. The quality of water such people use or drink also leaves an adverse impact on people's health where the younger population is more affected.

On issues like these, one could not agree more with the UN body but the observation on food price seems to have been a bit misplaced. In Bangladesh rice price is the record low now in many years, so there is no question of a large number of children going hungry now. It may happen for a handful of families. Be that what it may, the bottom line is that children are increasingly becoming vulnerable to impacts of climate change and remedies have to be found and found soon. One thing is clear that the local climate refugees need to be rehabilitated under a well-devised programme. Better it would be if such people's migration to city slums can be stopped through such rehabilitation.