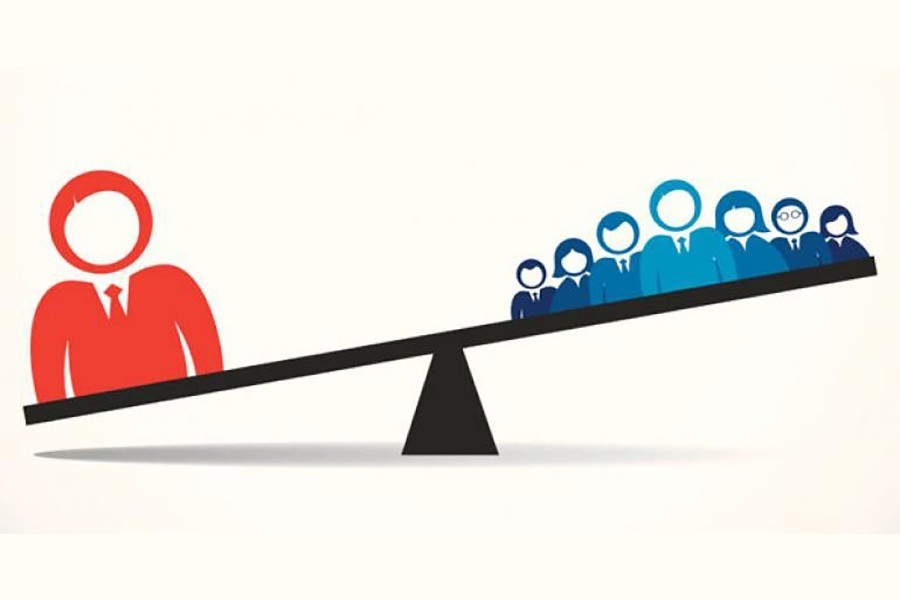 If Gross Domestic Product (GDP) growth is the measure, then Bangladesh economy has been doing rather well so far. Going by the 5.24 per cent GDP growth rate for FY 2019-20 as claimed by the government, this seems to be true even under the pandemic. However, experts may disagree with the official figures. Even the General Economic Division (GEC)'s latest estimate says that the national poverty rate as of June rose by 9.0 percentage points to 29.5 per cent (from last fiscal's 20.5 per cent). So, considering the pandemic situation, the experts' estimate makes a worrying point. Oft-repeated but quite relevant is the fact that the general people keep the wheels of the economy running. In that case, a well-performing economy should manifest itself in the improved living standard of the working people. In other words, it should contribute to reducing the income disparity in society.

The planning minister at a recent webinar said the government had a responsibility to address the problem. As a reason, he even pointed to the insufficient budgetary allocations for health and education.   The findings some research and anti-poverty advocacy groups presented at that webinar also showed that the majority of the people are not getting the benefits of high growth.

A solution to the problem of rising income inequity, in many Western countries, has been sought in a progressive taxation system. And, redistribution of wealth is done there through increased public spending on education, health and social security. On education, for instance, Sweden and Norway spend 6.8 and 6.5 per cent of their GDPs. Close by, Malaysia and Indonesia spend 5.8 and 4.6 per cent respectively. But in Bangladesh's budget for FY 21, the allocation for health amounts to only 1.3 per cent of the GDP. This is way below the WHO's prescription of 4.0 per cent. Similarly, education's share is only 2.09 per cent of GDP, whereas the UNESCO says it should be 4.0 to 6.0 per cent. However, for social safety, the allocation at 3.01 per cent of the GDP is reassuring; obviously, the higher these allocations are vis-à-vis the GDP, the better would they serve to reduce wealth or income differences in society if spent well. Of course, it will require a right public finance policy in place.

As part of its target to become a middle income nation, Bangladesh is also committed to meeting SDG 10, which stresses reducing inequality. It requires Bangladesh to achieve and sustain the income growth of its poorest 40 per cent population at a rate higher than the national average by 2030. Overall, the drive for GDP growth should be in sync with a progressive public spending policy aimed at achieving distributive justice.