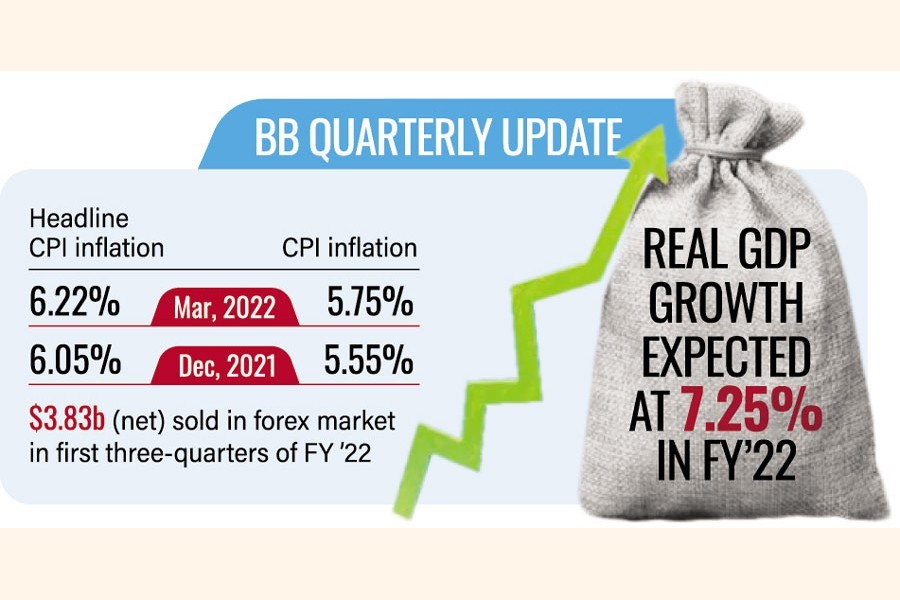 Bangladesh's central bank has predicted instability of exchange rate and inflation upturn in the days ahead, too, while the two problems already prevail in the economy.

In its quarterly publication styled 'Economic and Financial Developments' for the January-March period, published Sunday, the Bangladesh Bank suggests careful monetary and fiscal measures to navigate the twin macroeconomic adversities.

"The inflation and exchange-rate volatility may get elevated in the coming quarters, due to global commodity price hikes and growing current-account deficits," it says.

"Overall macro stability warrants cautious monetary and fiscal measures in the near term," the central bank says in the economic update.

Bangladesh Bank noted that despite the Covid-driven global supply shock amid the ongoing Russia-Ukraine war, a broad-based recovery of Bangladesh economy continued during the period in review.

"The exuberance of economic activities was concentrated mainly in industry and services sectors, favoured by a buoyant domestic demand reflected in the surge in imports and a solid external demand indicated by higher growth of exports," it says.

The Real GDP growth is expected to be around 7.25 per cent in FY'22, as estimated by the Bangladesh Bureau of Statistics (BBS), it adds.

The quarterly publication mentions that the Headline CPI inflation (point to point) edged up to 6.22 per cent in March 2022 from 6.05 per cent in December 2021, driven by food inflation, while non-food inflation moderated considerably.

"The rise in inflation originated mainly from the pass-through of soaring global commodity and energy prices in the face of worsening supply conditions further exacerbated by the Russia-Ukraine war," it says.

The twelve-month average CPI (consumer price index) inflation increased to 5.75 per cent in March 2022 from 5.55 percent in December 2021, according to the BB reckonings.

It says the external sector faced some headwinds during the first three quarters of FY'22, reflected in widened current-account deficit resulting from high import growth over export earnings and remittance inflows.

Despite a growing surplus in the financial account, the overall balance posted a deficit of $3.1 billion, which exerted a depreciating pressure on the exchange rate during this period.

To reduce the excessive volatility of BDT's exchange rate, the central bank sold $3.83 billion (net) on the foreign-exchange market during the first three quarters of FY'22.

This was driven mainly by higher net domestic assets growth emanated from increased credit flows to the private and public sectors. At the same time, the widening balance-of- payments deficit led to a contraction of net foreign assets.

"A slowdown in deposit growth in tandem with a rise in the domestic credit led to a decline in liquidity in the banking system," it says.

Nonetheless, interest rates on the inter-bank money market declined at the end of March 2022 mainly because of government's redemption of short-term bank borrowings.

The banking sector's asset quality lessened slightly in third quarter of FY'22 compared to the same period in previous year.

The capital market witnessed some moderation in the third quarter in FY'22, reflected in a downturn in price indices, market capitalisation, price-earnings ratio, and turnover.

"The weak performance can be attributed to investors' disquiet regarding the account of banks' exposure limit cost price vs. market price, commodity prices instability in both global and domestic markets, and financial tightening concern in both developing and emerging markets," the central bank says based on a detailed anatomy of the country's economic health in a globally trying time.

The BB had a prediction about a strong growth momentum in economic activities to be prevailing during the rest of the fiscal year, led by robust industry and services-sector activities.

"However, this growth prospect is clouded by some uncertainties in the form of pass-through effects of higher global commodity and energy prices into domestic wage and production costs and potential loss of export demand in Europe caused by the Russia-Ukraine war-driven economic slowdown," adds the publication.