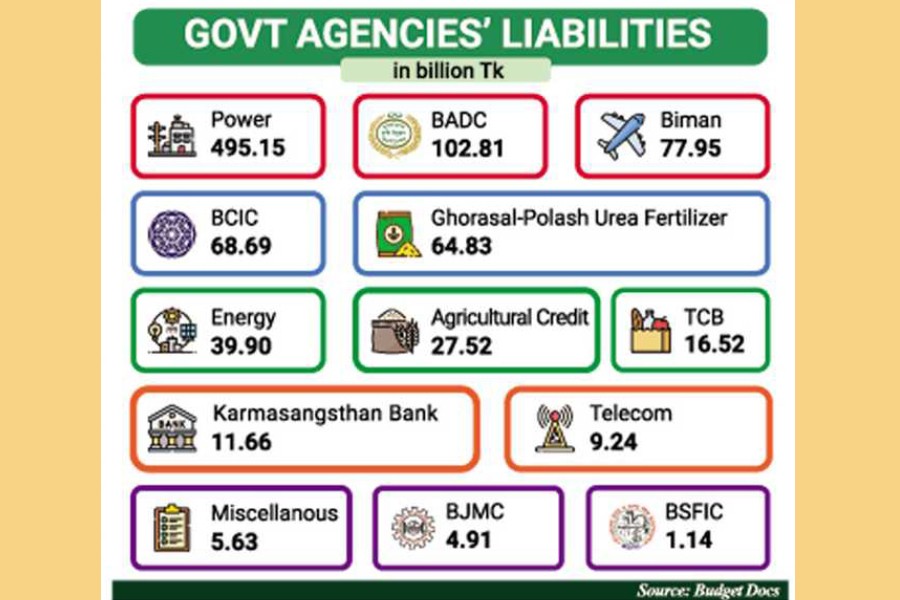 The SOE debt overhang, following a 25-percent surge in their loans backed by government guarantees, valid beyond June 2022, has future fiscal implications for the exchequer in economists' view.

The borrowings buildup involves mainly guarantees provided for 18 large-project guarantees for power-generating projects, according to the sources.

The total power-sector guarantees amount to Tk 495.15 biliion or more than 54 per cent of the total, followed by the country's agriculture-development agency BADC involving import of some essential fertilizers.

The guarantee amount equivalent to over 2.0 per cent of the GDP is a matter of concern as the liabilities for payments will pass on to the government when government agencies will fail to repay the loan in time and consequently have future fiscal implications, analysts opine.

The government-owned financial and non-financial enterprises implement many projects and programmes and they need such state guarantees and counter- guarantees against loans. The overseas banks or financial institutions or local banks want such underwriting to provide the loans to the agencies.

The government has to grant guarantees to the SOEs to help them borrow funds to run and expand their operations, as the organisations cannot arrange loans themselves because of their weak financial condition.

Both local and international financiers which seek such guarantees from the government at home are Bangladesh Bank, Sonali Bank, Janata Bank, Agrani Bank and Rupali Bank.

Economists view that the guarantees are part of "contingent liabilities". And these are actually liabilities for the government in the event of default.

Dr M. Masrur Reaz, Chairman at the private think-tank Policy Exchange of Bangladesh, told the FE that those are in a sense "hidden subsidies" and also put pressure on public finances.

He feels that Bangladesh's debt- to- GDP ratio will rise sharply when these will be taken into account.

"To my mind, once these liabilities are considered, the debt-GDP ratio will be much higher or over 50 per cent of the GDP."

The government debt-to-GDP ratio is now 37 per cent.

Dr Zahid Hussain, former lead economist of the World Bank, told the FE that the number and the volume of liabilities are likely to rise in the near future as the government agencies, especially BADC and BCIC, may need to procure fertilizers which remained expensive now.

"The volume may surge within the next year as the fertilizer and other imported goods in the international market remained volatile due to the war in Ukraine."

Bangladesh Chemical Industries Corporation (BCIC) under the Ministry of Industries took six guarantees for importing urea, amounting to over Tk. 68.69 billion, in 2018.

The urea price on the international market has surged over 100 per cent due to the war in Ukraine and supply- chain disruptions.

If the two government agencies now procure fertiliser and take guarantees, it will be significantly higher as the international prices of the agricultural input remain volatile.