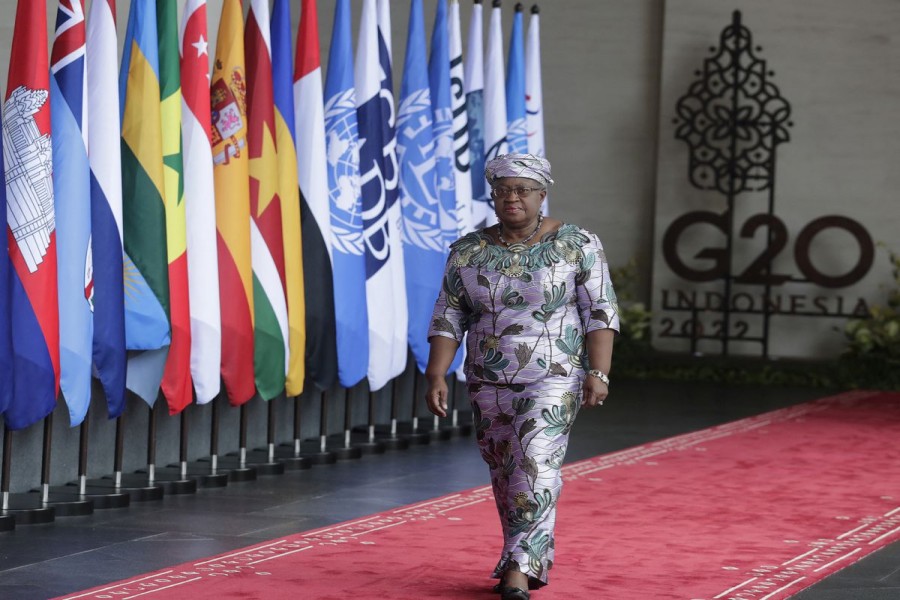 The head of the World Trade Organization (WTO) warned on Wednesday that several major economies face a real risk of sliding into recession as the war in Ukraine, rising food and fuel costs, and soaring inflation cloud the global outlook.

"It may not happen everywhere, but several key countries risk sliding into recession," WTO Director-General Ngozi Okonjo-Iweala told Reuters on the sidelines of the G20 leaders' meeting in Bali, Indonesia.

"Of course, the impact of that can be quite significant for emerging markets and poor countries, which need external demand from the developed countries to recover."

The Geneva-based trade body last month projected global trade to rise just 1.0 per cent in 2023, down sharply from an estimated 3.5 per cent rise for this year.

"There are so many uncertainties and most of the risks are on the downside," such as the fallout from the war in Ukraine and headwinds from inflation, she said.

A second day of talks by the Group of 20 (G20) leaders on Wednesday was disrupted by an emergency meeting to discuss reports of a missile landing in Polish territory, adding to uncertainty over the economic fallout from the war in Ukraine.

Okonjo-Iweala said she has called on G20 leaders to phase out food export restrictions, which have been on the rise and hurt poor countries by pushing up food prices.

Among the few bright spots that she noted, US President Joe Biden and Chinese leader Xi Jinping met on the sidelines of the G20 summit to mend strained bilateral ties that are among the uncertainties weighing on the prospects for global recovery.

"One doesn't want to read too much into it, but it's always good when the two biggest economies in the world talk to each other," Okonjo-Iweala said of the US-China summit.

"Certainly with respect to trade, it's very helpful."

Okonjo-Iweala said she was "very hopeful" some breakthrough will be made in reforming the WTO's dispute settlement system, which has been paralysed since 2019 when the administration of former US President Donald Trump blocked the appointment of judges for an appeals body arbitrating on global trade disputes.

"The Americans are consulting actively with other members at an informal level," she said, adding that the stronger US engagement will help speed up progress on reform from the beginning of next year.

In a meeting in September, trade ministers of the G7 advanced economies agreed to work towards having a functioning WTO dispute settlement system by 2024.