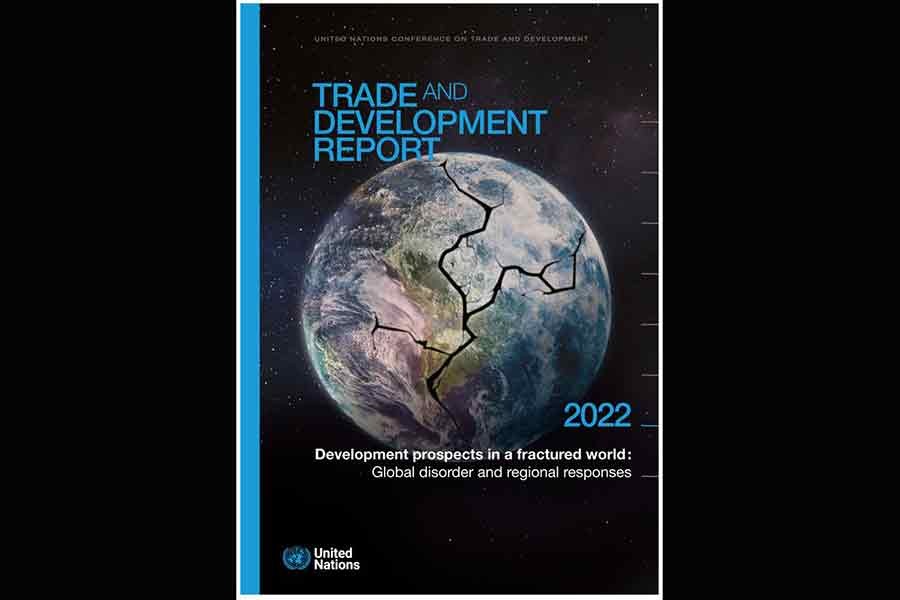 The United Nations Conference on Trade and Development (UNCTAD) has projected that the world economy would grow 2.5 per cent in 2022.

UNCAD expected that growth to decline further to 2.2 per cent in 2023, leaving real GDP still below its pre-pandemic trend by the end of next year.

In the Trade and Development Report 2022 released on Monday, the UNCTAD outlined actions to avert crisis and support developing countries.

Monetary and fiscal policy moves in advanced economies risk pushing the world towards global recession and prolonged stagnation, inflicting worse damage than the financial crisis in 2008 and the Covid-19 shock in 2020, says the report.

Rapid interest rate increases and fiscal tightening in advanced economies combined with the cascading crises resulting from the Covid pandemic and the war in Ukraine have already turned a global slowdown into a downturn with the desired soft landing looking unlikely.

In a decade of ultra-low interest rates, central banks consistently fell short of inflation targets and failed to generate healthier economic growth. Any belief that they will be able to bring down prices by relying on higher interest rates without generating a recession is, the report suggests, an imprudent gamble.

At a time of falling real wages, fiscal tightening, financial turbulence and insufficient multilateral support and coordination, excessive monetary tightening could usher in a period of stagnation and economic instability for many developing countries and some developed ones.

This year’s interest rate hikes in the United States are set to cut an estimated $3.6 trillion of future income for developing countries (excluding China) and signal even more trouble ahead, the report warns.

“There’s still time to step back from the edge of recession,” UNCTAD Secretary-General Rebeca Grynspan said.

“We have the tools to calm inflation and support all vulnerable groups. This is a matter of policy choices and political will. But the current course of action is hurting the most vulnerable, especially in developing countries and risks tipping the world into a global recession.”

A synchronised slowdown in the global economy affecting all regions

Prospects are worsening, with growth in 2023 expected to decelerate further to 2.2 per cent, leaving real GDP still below its pre-pandemic trend by the end of next year and a cumulative shortfall of more than $17 trillion -- close to 20 per cent of the world’s income.

The synchronised slowdown is hitting all regions but is ringing alarm bells for developing countries, where the average growth rate is projected to drop below 3 .0 per cent, a pace insufficient for sustainable development, further squeezing public and private finances and damaging employment prospects.

The report notes that countries that were showing signs of debt distress before Covid are taking some of the biggest hits (Zambia, Suriname, Sri Lanka) with climate shocks further threatening economic stability (Pakistan).

Some 90 developing countries have seen their currencies weaken against the dollar this year – over a third of them by more than 10 per cent; foreign exchange reserves are falling and bond spreads are widening, with a growing number posting yields 10 percentage points higher than US treasuries.

Currently, 46 developing countries are severely exposed to multiple economic shocks and another 48 seriously exposed, heightening the threat of a global debt crisis.

The report concludes the situation in developing countries is much more tenuous than recognized by the G20 and other international financial fora, with talk of a global financial safety net increasingly at odds with their reality.

Developing countries have already spent an estimated $379 billion of reserves to defend their currencies this year, almost double the amount of new Special Drawing Rights (SDRs) recently allocated to them by the International Monetary Fund, and have also suffered significant impact from capital flight.

UNCTAD calls for the increasing of Official Development Assistance (ODA), a larger, more permanent, and fairer use of SDRs, hedging mechanisms to deal with exchange-rate volatility, and greater leveraging of multilateral capital to support developing countries with comprehensive social programmes.

But additionally, progress on a multilateral legal framework for handling debt restructuring, including all official and private creditors, should be made a priority.

The report recommends a programme of reforms in developing economies to boost productive investment and constrain capital moving to exploit tax loopholes, along with new arrangements to support closer regional trade, investment and financial ties.

An urgent call for course correction

Compared to the global financial crisis, the Covid-19 recovery has been more inflationary for advanced economies than for developing countries, where inflation rates are structurally higher.

In developed countries, inflation has been mostly driven by commodity prices – especially energy – and persistent bottlenecks in supply chains, with roots in sufficient investment since the global financial crisis. Inflation measures that exclude energy are considerably lower than consumer price inflation.

In many developing countries, inflation has been largely driven by energy prices and exchange rate depreciation, which has made imports more expensive.

Under these circumstances, the report says, harking back to the 1970s or to later decades marked by austerity policies in response to today’s challenges is a dangerous gamble.

“The real problem facing policy makers is not an inflation crisis caused by too much money chasing too few goods, but a distributional crisis with too many firms paying too high dividends, too many people struggling from paycheck to paycheck and too many governments surviving from bond payment to bond payment,” said Richard Kozul-Wright, head of the team in charge of the report.

With inflation already beginning to ease in advanced economies, UNCTAD calls for a course correction in favour of policy measures targeting price spikes in energy, food, and other vital areas directly.

The report underlines the need for increased support for vulnerable groups, including lower-wage workers and households in financial distress, warning of the damage that monetary tightening is causing to economic, social and climate goals, hitting the poorest the hardest.