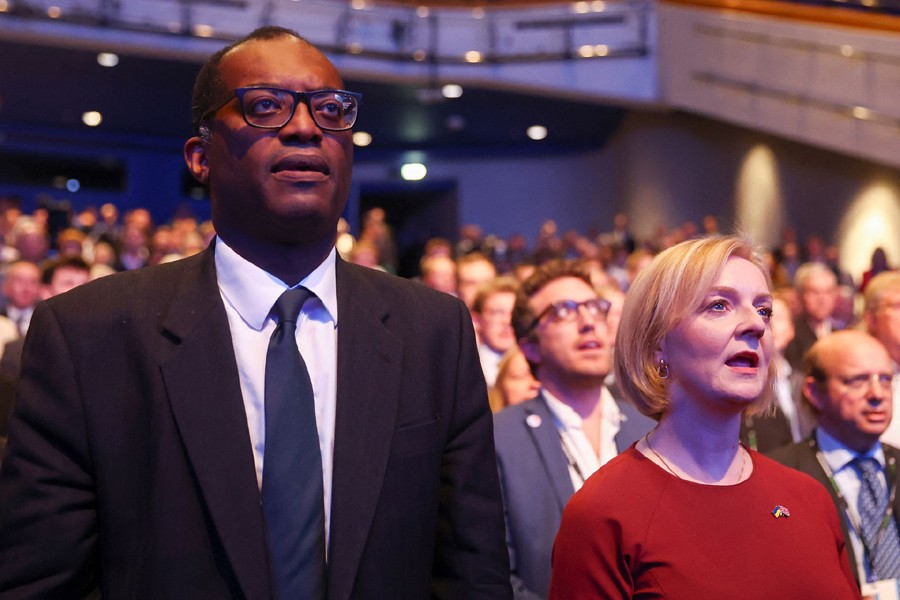 British Prime Minister Liz Truss was forced on Monday into a humiliating U-turn, reversing plans to cut the highest rate of income tax that helped to spark a rebellion in her party and turmoil in financial markets.

Truss, and her finance minister Kwasi Kwarteng, announced a new "growth plan" on September 23 that would cut taxes and regulation, funded by vast government borrowing to snap the economy out of years of stagnant growth.

But the plan triggered a crisis of investor confidence in the government, hammering the value of the pound and government bond prices and jolting global markets to such an extent that the Bank of England had to intervene with a 65 billion pound ($73 billion) programme to shore up the markets, reports Reuters.

While the removal of the top rate of tax only made up around 2 billion out of a 45 billion pound tax-cutting plan, it was the most eye-catching element of a fiscal package that was to be funded by government borrowing, with Kwarteng not explaining how it would be paid for in the long-term.

Just hours after Truss went on BBC television to defend the policy, Kwarteng released a statement saying he accepted it had become a distraction from wider efforts to help households through a difficult winter.

"As a result, I'm announcing we are not proceeding with the abolition of the 45p tax rate. We get it, and we have listened," he said in the statement.

The decision to reverse course is likely to put Truss and Kwarteng under huge pressure, less than four weeks after they came to power. Britain has had four prime ministers in the last six politically turbulent years.

Kwarteng said he had not considered resigning.

"The 45p rate was simply a distraction on what was a very, very strong set of measures," he told BBC television, adding that the U-turn decision had been taken by himself and Truss.

Truss, Britain's 47-year-old former foreign minister who took office on September 6 after winning a leadership contest among Conservative Party members, and not the country, said on Sunday she should have done more to "lay the ground" for the policy.

Truss had also not denied that it would require spending cuts for public services. On Sunday she refused to commit to increasing welfare benefits in line with inflation - a toxic combination that would be seized on by opposition parties.

"From a markets perspective, it is a good step in the right direction. It will take time for markets to buy the message but it should ease the pressure," said Jan Von Gerich, chief analyst at Nordea.

The pound has clawed back its losses against the US dollar since Kwarteng delivered the mini-budget. It traded up 0.8 per cent on Monday before slipping back as Kwarteng spoke to the BBC. It was up 0.2 per cent at $1.118 at 0651 GMT.

Several senior lawmakers in the Conservative Party had come out publicly against the policy, saying cutting government spending and hiking borrowing to fund tax cuts for the richest was politically risky during a cost-of-living crisis.

One Conservative lawmaker who asked not to be named said the reversal was inevitable. "More structure, clearly, is needed in decision-making," he said.