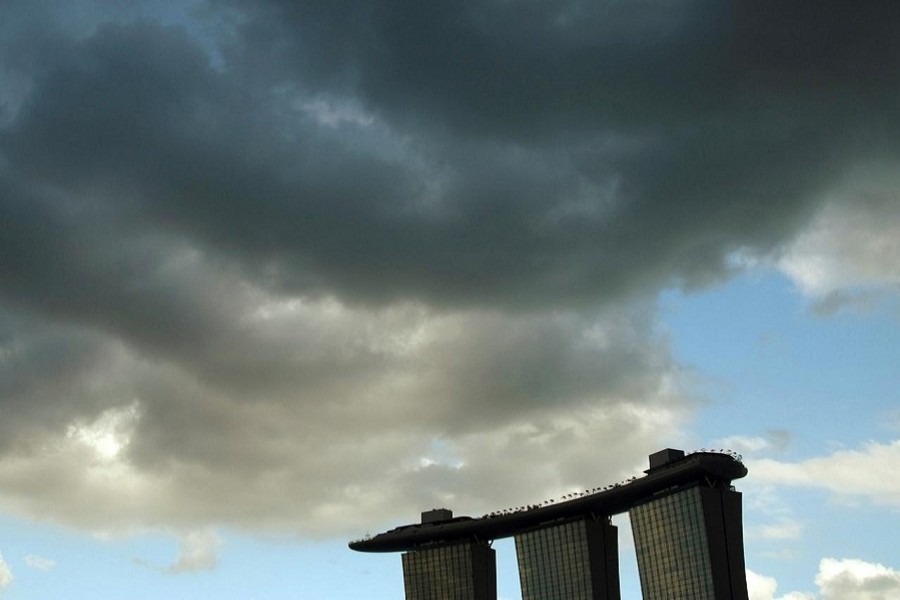 Clouds are seen above the Marina Bay Sands resort in Singapore, January 24, 2011. — Reuters/Files

Singapore said on Thursday it was planning for a deep recession due to the coronavirus pandemic as its economy suffered the worst contraction in a decade in the first quarter, reinforcing fears global activity will slump sharply this year.

Singapore is among the world’s most open economies and one of the first to report growth data since the virus spread from China earlier this year, portending more pain for other countries as they impose increasingly strict anti-virus measures.

Even though Singapore has so far avoided the lockdowns seen in other nations, its economy still shrank 2.2 per cent in the first quarter from a year earlier, with heavy hits to services, construction and manufacturing, preliminary readings from trade ministry showed.

The small Southeast Asian city-state is a major financial centre and port, making it a bellwether for global trade, and is a popular tourist destination.

The data prompted the trade ministry to cut its 2020 GDP forecast range to -4.0 per cent to -1.0 per cent, from a previous range of -0.5 per cent to 1.5 per cent, and firmed up investors’ bets for imminent fiscal and monetary stimulus.

“This could well be the worst recession ever on record for Singapore,” said Irvin Seah, senior economist at Singapore’s biggest bank DBS, predicting a 2.8 per cent full-year contraction.

Economists polled by Reuters last week showed more than three-quarters believed the global economy is already in recession as the virus continues to spread, ending the longest expansion on record.

Highlighting the suddenness and severity of the shock, separate data on Thursday showed Singapore’s industrial output plunged 22.3 per cent in February from the previous month - the biggest contraction in official records going back to 1983, and far more than a forecast 11.5 per cent fall.

Just weeks after announcing multi-billion dollar schemes to offset the impact of the outbreak on businesses and households in its annual budget, the finance ministry is set to announce more relief packages later on Thursday.

The Monetary Authority of Singapore (MAS), meanwhile, has brought forward its semi-annual monetary policy statement to Monday, March 30, and many economists are expecting drastic easing not seen since the financial crisis as global central banks pull out all the stops.

“The extent of the first two months already tells you...how bad it is going to get,” said Selena Ling, head of treasury research and strategy at OCBC Bank.

“The likelihood is that they will bring out a very big bazooka this afternoon, and come next Monday, MAS will also do what’s necessary.”

Singapore has been battling the virus outbreak which has killed more than 21,000 globally since mid-January. It has seen a surge in mainly-imported infections in recent days, prompting it to order the closure of bars, discos, and cinemas and limit gatherings.

On Wednesday, it recorded its biggest daily jump in cases, bringing its total to 631 with two deaths.

“Singapore’s growth estimate is like the canary in the mineshaft and warns of further economic pain to come for other Asian economies as well,” analysts at OCBC said.