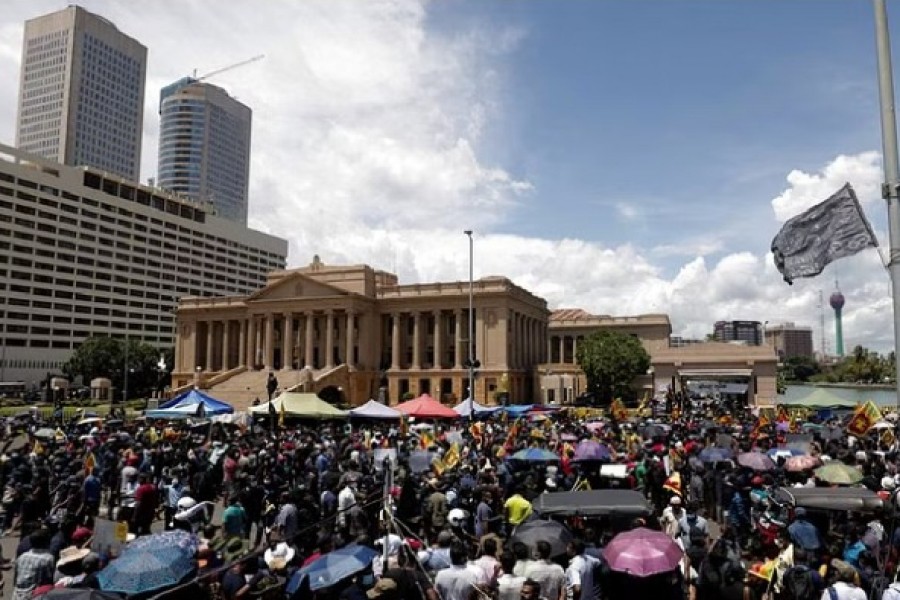 Trade unions protest during a nationwide strike demanding the resignation of President Gotabaya Rakapaksa and his cabinet, blaming them for creating the country's worst economic crisis in decades, in front of the Presidential Secretariat in Colombo, Sri Lanka, Apr 28, 2022. REUTERS

Sri Lanka's key inflation rate eased to 61 per cent in November from 66 per cent in October, the crisis-struck country's statistics department said on Wednesday.

The Colombo Consumer Price Index (CCPI) reflected a 73.7 per cent jump in food prices from a year earlier and a 54.5 per cent climb in the non-food group, the Census and Statistics Department said in a statement, according to Reuters.

However, the pace of food inflation slowed from an all-time high of 94.9 per cent in September.

Sri Lanka has been struggling with soaring inflation for about a year, partly triggered by its worst financial crisis in seven decades and an ill-thought out seven month ban on chemical fertiliser implemented last year.

"This is in line with expectations. Food prices are coming down faster and while it is hard to predict, inflation could reach mid-to-high 50s at the end of 2022," said Thilina Panduwawala, head of research at Frontier Research.

Central Bank of Sri Lanka Governor Nandalal Weerasinghe predicted that if the current trend of monetary policy was followed, inflation could drop to 4.0-5.0 per cent by the end of next year.

In an effort to tame prices and stabilise markets, the bank held rates in its last policy announcement on Nov 24.

The CCPI, released at the end of each month and closely watched by central bank policymakers, acts as a lead indicator for broader national prices and shows how inflation is evolving in Colombo, Sri Lanka's biggest city.