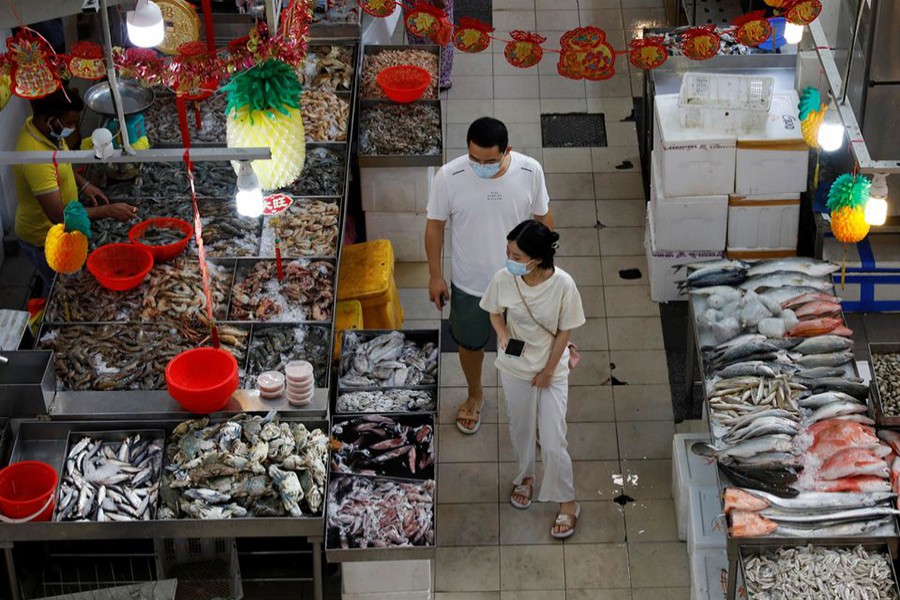 People shop for fish at a wet market during the coronavirus disease (Covid-19) outbreak, in Singapore September 21, 2021 — Reuters/Files

Singapore's key consumer price gauge rose 5.1 per cent in October, slightly less than forecast and marking the first easing in eight months, official data showed on Wednesday, due to smaller rises in prices of utilities, retail, other goods and services.

Analysts had said the reduced pace of increase should leave some space for the central bank to refrain from further tightening next year, and to focus more on dealing with the slowing economy, reports Reuters

The core inflation rate - the central bank's favoured price measure which excludes private transport and accommodation - rose to 5.1 per cent in October on a year-on-year basis, slower than the 5.3 per cent seen in September. A Reuters poll of economists had forecast a 5.3 per cent increase in October.

Headline inflation came in at 6.7 per cent, a drop from the 7.5 per cent increment in September. The economists' forecast for October was 7.1 per cent.

The central bank had earlier said core inflation was likely to remain elevated at about 5 per cent for the rest of 2022 and into the first half of 2023.

The city-state tightened monetary policy last month for the fourth time this year to combat inflation.

"Our base case is for the MAS (Monetary Authority of Singapore) to refrain from further FX-policy tightening in 2023, though the risk of more adjustments remains significant," said Brian Tan, Barclays’ Senior Regional Economist, while reducing his 2022 core inflation forecast to 4.1 per cent from 4.2 per cent.