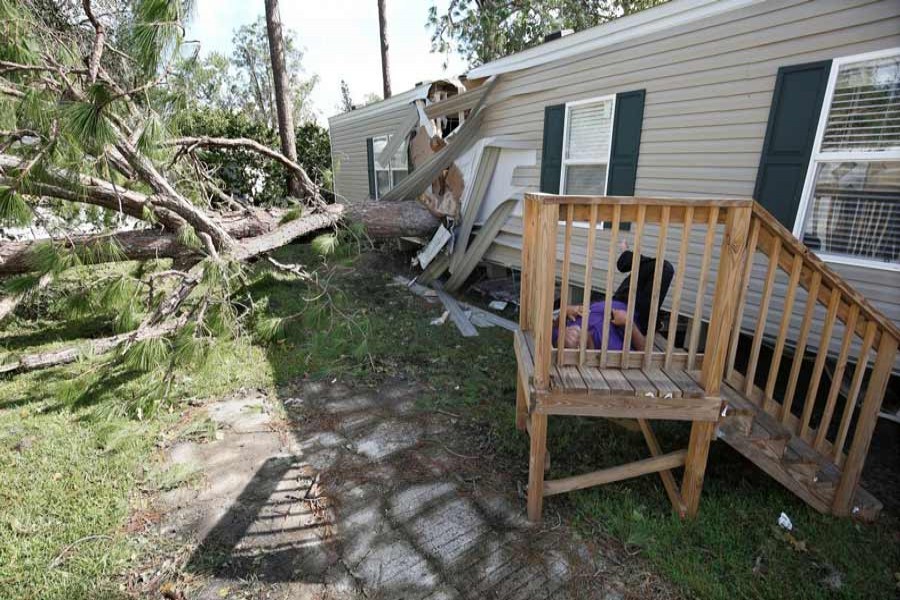 A resident of a mobile home park lies near a home that was destroyed by a falling tree in the wake of Hurricane Irma in Kissimmee, Florida, US September 12. — Reuters

There are 600,000 homes in Texas and Florida alone that need re-roofed or repaired and results over the next month will give some sign of how much the resulting squeeze on building materials will benefit suppliers over the next year, reports Reuters.

Shares in firms like USG Corp, Owens Corning, Eagle Materials Inc, Beacon Roofing Supply Inc and GMS Inc have jumped about 10-20 per cent since Hurricane Harvey and Irma struck the region a month ago.

But data and industry estimates suggest there may be more to come as sector firms unveil their results for the third quarter and give clearer guidance on the impact on the prices they pay and charge for materials now in high demand.

As the attached graphic shows, the impact of past storms has taken months to work through in the value of suppliers and will typically boost the shares by far more.

"Prior storm events suggest prices can increase 10 per cent or more for many kinds of materials, with those price effects moderating in a few quarters and returning back to economic fundamental trends," National Association of Home Builders (NAHB) Chief Economist Robert Dietz told Reuters.

Local government estimates used by analysts from brokerage Jefferies suggest that around 10 per cent of housing stock affected by the storms in the two states requires work.

That should spur low to mid-single digit annual rises in sales volumes for wallboard, flooring, insulation and roofing analysts say.

Hurricane Harvey struck on Aug. 25.  For comparison, in the six months after Hurricane Katrina's catastrophic landfall in Louisiana in 2005, shares in USG rose 94.7 per cent, Eagle Materials' 58.6 per cent and Beacon Roofing 27.9 per cent.

Some supply chain disruptions due to the hurricane could increase raw material costs for manufacturers, tempering some of the benefits that they get from higher demand.

"There are going to be some short term headwinds (for building products companies) due to cost and reduced volumes," Jefferies analyst Philip Ng told Reuters.

But he also added that the companies should still benefit just because Houston and Florida are very large markets.