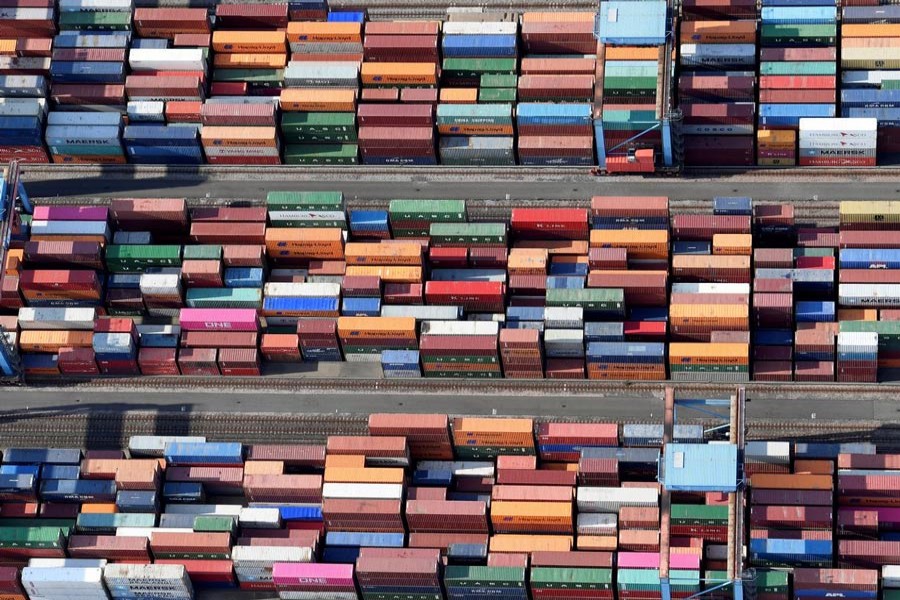 Aerial view of containers at a loading terminal in the port of Hamburg, Germany — Reuters

Europe's largest economy is not facing a bigger downturn or a pronounced recession after contracting slightly in the second quarter but there are no signs of a turnaround yet either, the German Economy Ministry said on Friday, reports Reuters.

The German economy contracted by 0.1 per cent quarter-on-quarter in the April-June period and some weak data since then has fueled concerns that the economy could slip into recession in the July-September period.

Economists generally define a technical recession as at least two consecutive quarters of contraction. This week several institutes said the economy would slide into recession in the third quarter.

"The German economy is going through a weak phase," the ministry said in its monthly report.

"A bigger downturn or even a pronounced recession is not expected at the moment. However, indicators don't point to an economic turnaround for the better either," it added.

The German economy has weakened as its export-dependent manufacturing sector languishes in recession, partly due to trade conflicts and uncertainty linked to Britain's planned departure from the European Union.

The ministry said exports were moving sideways but private and state consumption were providing noticeable support to the economy.

While construction is faring well, the industrial and energy sectors are experiencing a weak patch, the ministry said. It added that a recovery in the industrial sector was not in sight for the time being after it suffered a poor start to the third quarter.

An earlier report of Xinhua from Berlin adds: The German economy was only expected to grow by 0.5 per cent this year instead of the previously forecast 0.6 per cent, the institute for economic research (ifo) announced on Thursday.

"The German economy is threatened by a recession. The weakness in industry is gradually spreading like an oil leak into other sectors of the economy, such as logistics, which is one of the service providers," warned Timo Wollmershaeuser, senior economist at ifo.

In the second quarter of 2019, the German economy had contracted by 0.1 per cent and the ifo institute was anticipating that growth would again decline by 0.1 per cent in the third quarter.

"That would then be a technical recession," Wollmershaeuser said.

The German economy would experience a slight recovery in the fourth quarter of 2019, while the 0.4 per cent growth from the first quarter would contribute to overall growth of 0.5 per cent for the year as a whole, according to ifo.

"The economic weakness has now left its mark on the labor market," said Wollmershaeuser.

While employment in German industry had been falling since the spring, the "previously strong growth in private service providers and the construction industry" had come to a standstill in the summer the ifo institute stated.

According to the Federal Employment Agency (BA), nearly 2.32 million people in Germany were unemployed in August, an increase of 0.1 per cent in the German unemployment rate.

On Thursday, the ifo institute announced that German unemployment figures for 2019 as a whole were expected to be 2.275 million.

In 2020, the number of unemployed people in Germany would rise to 2.313 million, the ifo institute calculated.

The Munich-based institute cut down its expectations for German economic growth for 2020 from 1.7 per cent to 1.2 per cent. Growth would be even lower at 0.8 per cent if adjusted for the increased number of working days next year.

AFP from Helsinki further says: Germany faced fresh pressure on Friday to boost public spending and help revive a sputtering European economy, a day after the European Central Bank (ECB) warned it had reached the limit of its powers.

The economy in Europe is in slowdown, tripped up by the US-China trade war and rising fears of a chaotic Brexit that have especially harmed export-powerhouse Germany.

To stave off recession, the ECB on Thursday cut its already negative interest rates and relaunched a round of bond-buying stimulus, but bank head Mario Draghi urged governments to do more to spark the economy.

The message was especially intended for fiscally-cautious Germany, where the government this week yet again unveiled a zero-deficit budget that flew in the face of calls for more spending, including by the IMF, top economists and the European Commission.

"We should not be satisfied with the level of growth within the eurozone," Le Maire said as he arrived for talks with his EU counterparts in Helsinki.

"It is now the time to decide and have more investments, more growth, more prosperity and more jobs within the eurozone," he added.

His Luxembourg counterpart, Pierre Gramegna, also made the call, without specifically calling out Berlin.

"Countries that have worked well to balance their budgets and have room for manoeuvre, should use it," he said.