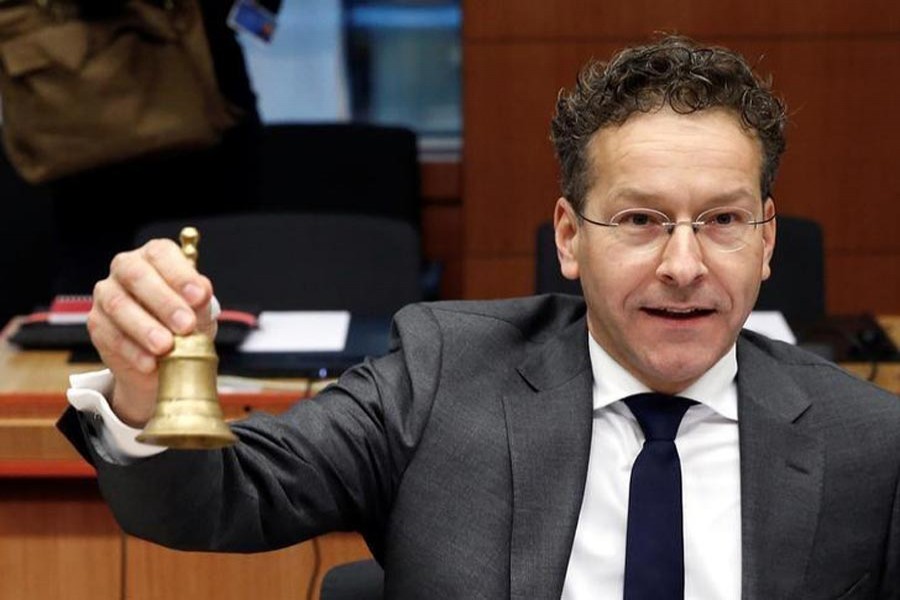 WASHINGTON, Oct 15 (Reuters): A euro zone budget of several hundred billion euros is an ambitious idea, the head of euro zone finance ministers said on Saturday, suggesting loans from the bailout fund and transfers from the existing European Union budget could be more feasible.

"Creating a whole new budget, inside or outside the European Union budget, of many hundred billion, is courageous," Jeroen Dijsselbloem told Reuters on the sidelines of the International Monetary Fund's meetings in Washington.

Euro zone governments are debating how to integrate further the 19 members of the 28-nation European Union that share the single currency to prevent a repeat of the sovereign debt crisis and reap greater benefits from the euro.

The European Central Bank and the euro zone bailout fund ESM support the idea of a separate pool of money for the euro zone that would help it respond to crises that hit only some members, rather than the whole bloc.

But among politicians the views on a need for a separate budget, its size and purpose vary greatly.

The EU as a whole already has a budget worth 1.0 per cent of its gross national income, which finances projects ranging from agriculture to a policy of increasing cohesion between the richer and poorer members.

German Chancellor Angela Merkel has been more in favour of a "small" budget, while a German position paper for a finance ministers' meeting last Monday said it was not necessary at all.

Dijsselbloem, who will present ideas for euro zone reform to euro zone leaders at a summit in December, said that in discussing a euro zone budget it was important to distinguish between transfers and loans.

It was crucial that any such budget would not create mutual euro zone debt - a red line for Germany, long wary of being roped into responsibility for other countries debts.

This left policymakers with two choices, Dijsselbloem said.  First, they could create what he called "convergence instruments" which would transfer money from the existing EU budget to countries implementing reforms.

The second option would be for the bailout fund ESM to offer cheap loans to countries financing reforms which also want to invest but do not have enough money for both.

The differences between Paris and Berlin on the size of the budget might be reconciled by keeping the project owned by governments, which would give powerful Germany a large say, while accommodating French ideas on how to spend the money.

"Some of the French ideas on what additional instruments we need could be used within the German ideas on how to do it institutionally," Dijsselbloem said, noting Berlin was keen to transform the bailout fund into a European Monetary Fund.

"If you want a European Monetary Fund you should also look at the kind of instruments that the IMF has," he said.

"We could also look at developing new instruments in the ESM. Preventive instruments, supporting countries that are in a convergence process or a reform effort. I think that is compatible with both French and German thinking," he said.

Dijsselbloem said that in discussing the budget, policymakers needed to first decide what policies they would like to finance at a European level.

"There is quite broad support in Europe that the EU should play a stronger role in providing border control, on migration policy and in cooperation on security and defence," he said.