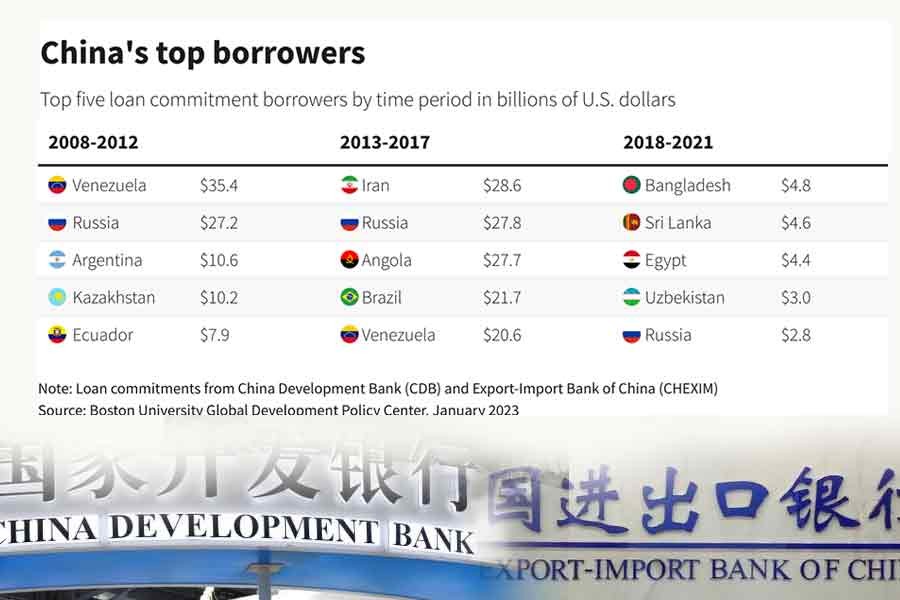 Commitments made to 100 developing nations by the Export-Import Bank of China (China EximBank) and the China Development Bank (CDB) have fallen every year since hitting a record in 2016 as the lenders scaled back financing even before the COVID-19 pandemic hit in 2020, according to Reuters.

"China's domestic priorities beyond COVID-19 are still significant, given the large amounts of debt and the swings in renminbi that may necessitate the need to be conservative with dollar holdings so they can serve as insurance on the home front."

China is the world's largest bilateral lender, according to the World Bank data. Western countries such as the United States and multilateral lenders are pressing Beijing to offer debt relief to emerging economies in distress, such as Zambia and Sri Lanka. China tends to disclose little on lending conditions and how it renegotiates with borrowers.

China EximBank and CBD made $498 billion in loan commitments globally between 2008-2021 as part of Beijing's "Belt and Road" infrastructure initiative.

General purpose lending to state-owned oil companies, for example in Angola, Brazil, Ecuador, Russia and Venezuela, reached $60 billion between 2009 and 2017.

Since then, lending has been less focused on petroleum producers, with Bangladesh and Sri Lanka among top recipients. The average size of loan pledges has also fallen, from $534 million between 2013-2017, to $378 million from 2018-2021.

Russia was the top recipient, with $58 billion in loans in the 2008-2021 period, followed by Venezuela with $55 billion mostly for extraction and pipelines projects, but lending to the South American oil giant halted in 2015, two years before it defaulted on its overseas debt.

Angola was the third largest recipient with $33 billion for projects in transport, agriculture, water and oil, with Kenya, Ethiopia and Egypt being other top African borrowers.

While Chinese lending has been waning, World Bank lending has ramped up, the study found.

The Washington-based lender financed projects in developing countries worth an average of $40 billion annually between 2016-2019, before scaling up its response to the pandemic in 2020 when it stepped in with $67 billion, its largest annual commitment since 2008. The following year, commitments were almost $62 billion - 17 times more than Chinese financing.

"The World Bank had a fixed amount of lending capacity, but this was accelerated as part of the COVID-19 response," Gallagher said, adding this might return to trend post-pandemic.

Reuters reported this month that the World Bank was seeking to vastly expand its lending capacity to address climate change and other global crises and would negotiate with shareholders ahead of April meetings on proposals including a capital increase and new lending tools.

Looking into 2022, the general trend away from supporting finance for large-scale hydrocarbon projects continues, the study added.

"It is telling that Chinese development finance institutions opted not to support Russia’s recent Arctic LNG 2 mega-project, even though they lent over $11 billion to a similar Russian project (Yamal LNG) just a few years ago," said Rebecca Ray, a senior academic researcher for the policy centre.

"Given this change of heart, it seems unlikely that China returns to major Russian lending in the near-term," she added.