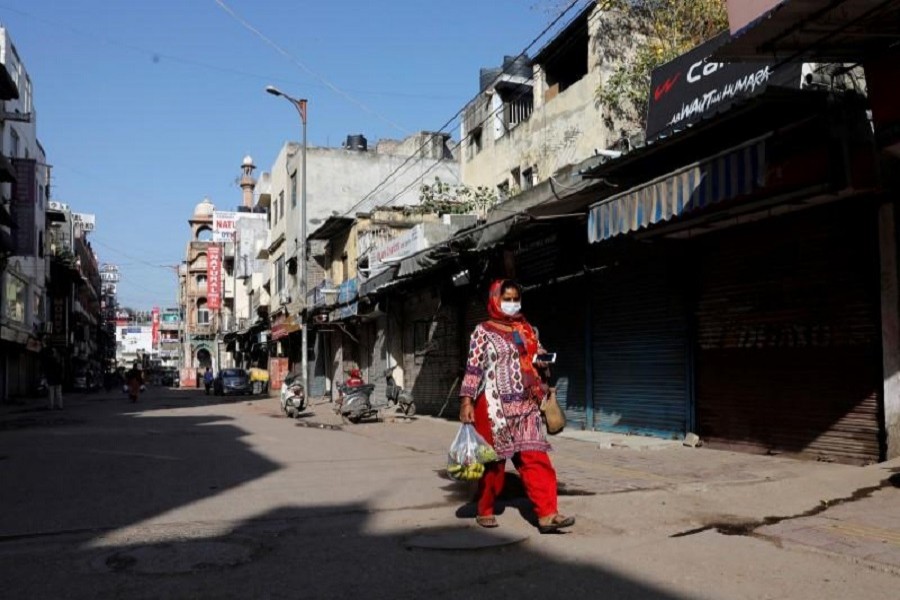 A woman walks along a near-empty street during a lockdown amid a coronavirus disease (COVID-19) outbreak in New Delhi, India, March 25, 2020. — Reuters

India’s already-slowing economy weakened to at least an eight-year low this quarter and will slow even more sharply in the next six months due to the global coronavirus pandemic, a Reuters poll found.

With the virus spreading rapidly, prime minister Narendra Modi announced a three-week nationwide lockdown on Tuesday which will have a huge detrimental impact on businesses.

India’s informal sector, the backbone of the economy, will be hardest hit as economic activity comes to a standstill.

“Just as everywhere else in the world, the Indian economy is bracing for the fallout (from) this unprecedented event. We expect the lockdown to dramatically reduce GDP in ... subsequent quarters, while there will be prolonged economic gloom throughout the rest of the year,” said Prakash Sakpal, Asia economist at ING.

According to the Reuters poll of economists taken March 25-26, India’s economy will expand just 4.0 per cent annually on a year ago in the quarter that ends on March 31, the weakest since comparable records began in early 2012.

That is also slower than the 4.7 per cent recorded in the last three months of 2019.

The economy was forecast to grow 2.0 per cent next quarter and 3.3 per cent in the July-September quarter.

Under a worst-case scenario, the economy was forecast to grow by a median 0.5 per cent in April-June, with one economist predicting a 20 per cent contraction. Still, only about one-quarter of those who answered this additional “worst-case” question said the economy would shrink.

The latest poll findings on India growth line up with expectations elsewhere around the globe, where economists have been slashing their outlook repeatedly and their worst-case scenarios are fast turning into central forecasts.

For the current fiscal year, economic growth was forecast to average 4.7 per cent and then slow sharply next fiscal year to 3.6 per cent - its most lacklustre rate since the global financial crisis.

While that already shows a grim outlook and how quickly the coronavirus-led economic hit is becoming clear, economists said growth would be much weaker than currently predicted if the situation worsens.

“The risks to our new forecasts are still firmly on the downside. If the latest measures fail to contain the virus, or if the monetary and fiscal response proves too timid, the economy could even contract this year,” noted Shilan Shah, senior India economist at Capital Economics.

India on Thursday announced a 1.7 trillion rupees ($22.6 billion) economic stimulus plan that will be released through direct cash transfers and food security measures aimed at giving relief to millions of poor hit by the nationwide lockdown.

Although a few economists said fiscal stimulus should be used to stoke a revival from this unprecedented hit to an already slowing economy, many in the poll said the Reserve Bank of India should deliver rate cuts of up to one percentage point.

But the RBI was expected to cut only 50 basis points at its March 31-April 3 meeting - taking the repo rate to 4.65 per cent, lagging its global counterparts who have been aggressively cutting interest rates and providing trillions of dollars in liquidity measures.

Still, over three-quarters of contributors said the RBI was not late in taking a decision when other central banks like the Federal Reserve and the European Central Bank have already approved drastic measures in emergency meetings.

“Of course, the earlier the better but the RBI has already been pumping liquidity into the system through repo auctions and, probably, this allows some leeway for it to wait until the scheduled meeting, which is now just a week away,” added ING’s Sakpal.