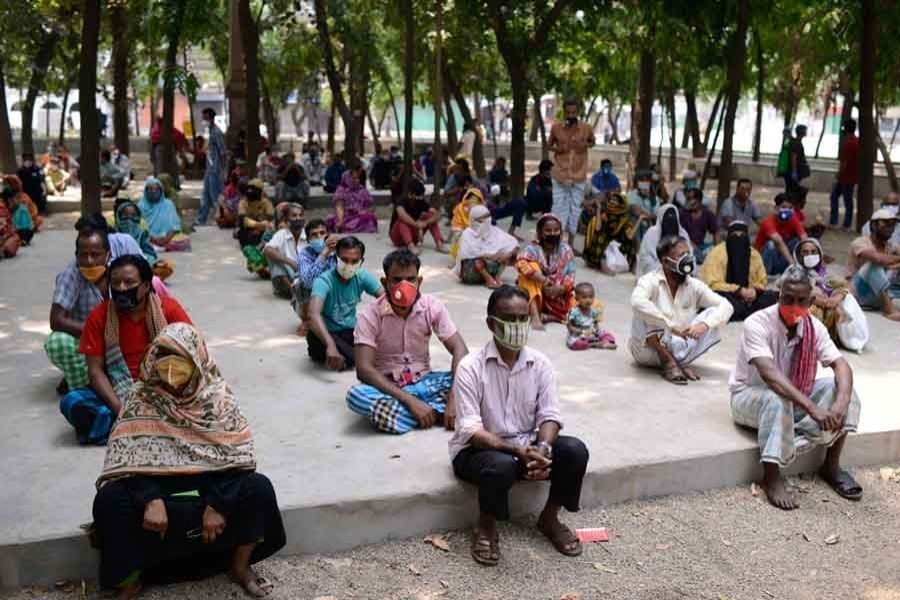 Economists have strongly criticised reduction in budgetary allocations for social safety-net programmes (SSNP) amid higher inflationary pressure in the country.

When vulnerable groups have the possibility to fall under the poverty line due to high inflation, the lower allocation is a wrong decision taken by the finance minister, they said.

An analysis by the FE has found that although the total allocations in the proposed national budget for the FY 2022-23 increased by 1.89 per cent compared to the outgoing fiscal's revised budget, the SSNP outlay excluding pension declined in real terms.

The new budget proposed a Tk 280.37 billion fund for the pension scheme, 21.8 per cent higher than that of Tk 230 billion in the revised budget for the outgoing FY2022.

The government for the upcoming FY2023 budget proposed to allocate Tk 1.135 trillion fund for the safety-net programmes, which is 12.62 per cent of the total Tk 6.78 trillion budget and 1.92 per cent of the GDP.

The FE analysis also found that the proposed allocation for the OMS (Open Market Sale) programme declined to Tk 17.20 billion from that of the revised allocation of Tk 19.43 billion in FY2022.

Similarly, the allocation for the 'Employment Generation Programme for the Poor' also fell to Tk 18.30 billion in the newly announced budget from that of Tk 19.25 billion in the revised budget for FY '22.

The allocation for the rehabilitation and alternative employment generation for beggars programme fell by 55.22 per cent to Tk 810 million from that of Tk 1.81 billion in the outgoing FY2022.

CPD Research Director Dr Khandker Golam Moazzem said that when the poor and low-income people are being affected severely due to the soaring prices of essential items, how the government could cut the social safety-net allocations in the budget.

"OMS is a big relief for the poor and low-income people. The allocation in this segment should be increased in the proposed budget. But the government cut the allocation which is an anti-poor decision," he added.

The higher allocation at the pension scheme will benefit the retired public servants only, whereas the poor will have no cushion from the budget allocation, Dr Moazzem said.

Former Director General of Bangladesh Institute of Development Studies (BIDS) Dr Mustafa K Mujeri said that lower allocation in the SSNP is not expected amid the present scenario and the future outlook.

"When the people are suffering from the higher inflationary pressure, a higher allocation is expected. But the lower allocation is contradictory to the needs," he added.

"Not only total allocations, the allocation for each of the beneficiaries should have been enhanced. For example, if the government provides Tk 500 per beneficiary, it should now be Tk 1000," Dr Mujeri said.

Both the economists suggested the government to increase the allocations in the social safety-net progarmmes to give a cushion to the poor and vulnerable people, the number of whom is apprehended to increase in the near future due to the global and domestic economic situation.