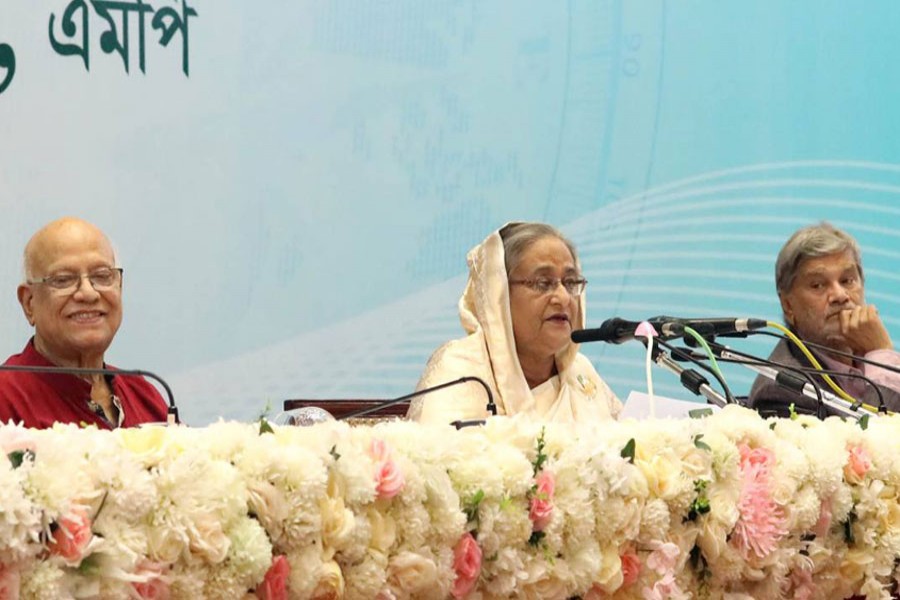 Prime Minister Sheikh Hasina briefs the media about the national budget placed in parliament on Thursday for the 2019-2020 fiscal year. Photo: PID

Prime Minister Sheikh Hasina warned Friday of stringent measures against private banks who are defying the directive to lower the interest rate to single-digit.

"We're always in favour of single-digit rate of interest," she said.

"We gave them (banks) some benefits [to lower the interest rates] but many private banks are not complying with it," the premier said.

Her warning came at a post-budget press conference held in Dhaka.

She said the budget speech has given required direction to the issue and the banks "must comply with it."

The premier attended the programme in the absence of ailing finance minister AHM Mustafa Kamal.

Sheikh Hasina described the proposed budget for the fiscal year (FY) 2019-20 as 'people's welfare-oriented' one and urged all to work with utmost sincerity to implement it properly.

"I can say one thing, this is a people's welfare budget... all have to work sincerely so that we can take Bangladesh to our desired level," the Prime Minister said.

She also read out the budget speech in parliament Thursday.

"Compound interest rate grows fast and people cannot do business [under such a condition]," she noted.

The prime minister underlined the need for amending some laws.

"We've been working on it [law amendments]," she noted.

About hefty non-performing loans, the Prime Minister said the amount grows as credit is calculated in compound interest rates. She said this is a weakness.

"Indeed, the actual loans will be much lower," she added.

She, however, said her government will take actions against the wilful defaulters.

"We'll give them a chance but it is also necessary to know how many print and electronic media took out loans and are not repaying those," she said in response to a question.

Saying that the budget proposal was intended to ensure welfare of the people, she insisted there is no more 'monga' in the northern region. Monga is known as seasonal famine.

"We've not heard about monga during the last decade," she said, dismissing the allegation that northern districts get tiny pie of the budget allocations.

"Even I've established of the Uttara EPZ [in Nilphamari]," she said.

Replying to a question, the premier said the government wants to foster self-employment through providing education, training and incentives.

She said some economic zones and other projects are also creating job opportunities for the people.

The Prime Minister said, "We see that farmers are not getting labourers during paddy cultivation, this means that there is no job scarcity in the labour market."

Replying to another question about the research organisations which are critical of the government, she said there are people who see problems in every step.

'They are mentally deranged, they are jealous of development…" she said.

Prior to responding to the questions from reporters, she read out a written speech on the budget proposals.

She said the government wants to establish a vibrant bond market in the country and for this it encourages investments in instruments like wage earners' bond, venture capital and treasury bonds.

The premier said the government is seriously considering the two issues: the entry of large number of youths in the labour market and modern technology-induced job losses.

On the development of railways, she said a feasibility study on the construction of Dhaka-Chattogram high speed train is in progress.

She said establishing 'Digital Bangladesh' is one of the key commitments of her government.

"We've already brought all districts and divisions under the 4G network, and mobile networks have been established in inaccessible upazilas," she added.

Referring to the scientific research and development (R&D), she said this is one of the prerequisites for increasing productivity and maintaining long-term economic growth.

"Opportunities will be created to encourage research and development activities in the country and we have proposed an additional allocation of Tk 500 million for the R&D," she said. The establishment of 100 economic zones across the country is in progress for employment generation through increased investment, she noted.