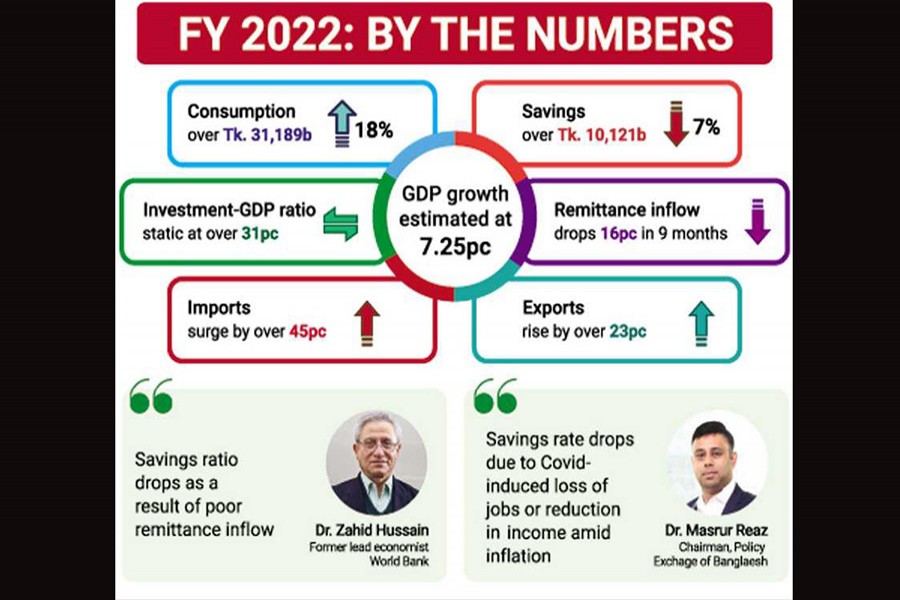 Bangladesh's economic growth has been fueled by a surge in consumption as a letup in the pandemic has unfrozen pent-up demand, but it costs people their savings.

Such consumption binge, for example, costing over Tk 31189 billion in the current fiscal year, up by more than 18 per cent than the previous year's, has forced contraction in the country's savings ratio by official count.

The country's gross domestic product, which measures the market value of all finished goods and services in a year, has been estimated to be 7.25 per cent (real GDP) provisionally for the current fiscal year.

The investment-to-GDP ratio, however, almost stagnated at over 31 per cent although private investment edged up by 0.36 percentage point in the year under review.

Imports, on the other hand, have surged by more than 45 per cent in the current year against more than 23-percent growth in exports, leaving a wide trade gap, resulting in deterioration of external accounts, fall in foreign-exchange reserves and significant devaluation of the local currency.

In the meantime, economists say, a surge in the pent-up demand after the lower infection rate of covid helped huge cons

"It did not come as a surprise to me following a boom in consumption as people's panic over corona got reduced to a large extent and they spent from the disposable incomes," says Dr Zahid Hussain, a former lead economist of the World Bank.

He sees consumer spending as the major driver of the GDP in Bangladesh as they have over Tk 41310 billion worth of disposable income.

Consumption expenditure by households usually becomes the largest component of GDP, accounting for about two-thirds of the GDP, in any economy.

The economist, however, says the savings ratio has dropped as a result of the poor remittance inflow in the year under review. The country's remittance inflow had dropped more than 16 per cent in nine months to March 2022.

''Rising import much faster than export is a signal for higher consumption,'' he notes, adding that the current-account deficit has widened by more than US $14 billion.

Dr Masrur Reaz, chairman at the Policy Exchange of Bangladesh, told the FE that consumption has been high for several reasons.

"Bangladesh has not experienced any recession in recent decades so the consumption remained the biggest driver of the GDP,'' he says.

There is a steady expansion of higher wage income, he mentions.

"Finally, a large number of people remained out of the formal banking system. So they have lack of diversified savings instruments, leading to greater consumption", Dr Masrur, who worked with the private- sector arm of the World Bank - the IFC.

He, however, thinks the recent drop in gross domestic savings rate could be a function of a drop in income due to covid that led to permanent and temporary loss of employment or reduction in income.

He also notes that after a rebound in the economy, inflation went up, leading to the need for higher spending for the same level of consumption.