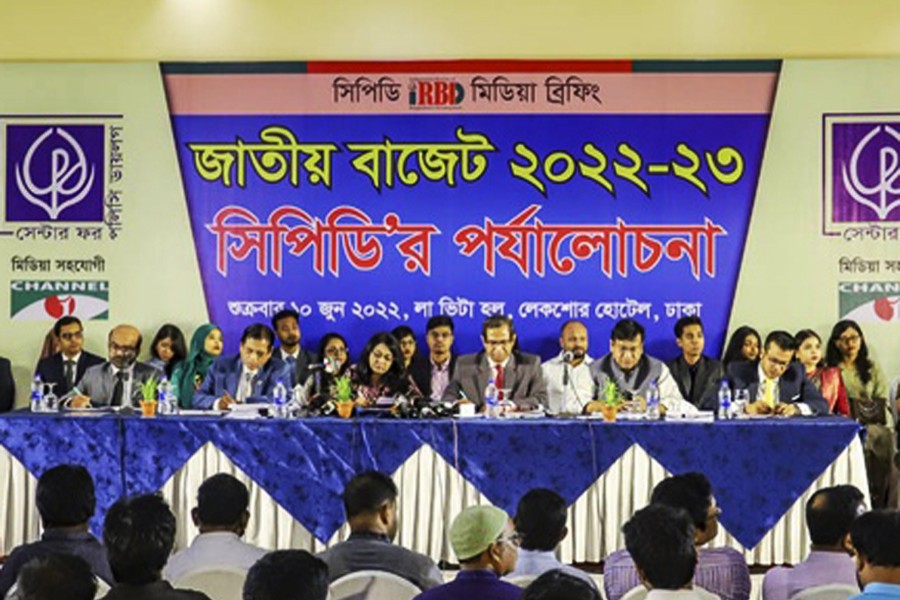 The Centre for Policy Dialogue (CPD) says the proposed budget for fiscal 2022-23 falls short of the mark in terms of addressing the inflationary issues facing the country and assuring citizens of keeping administered prices stable.

At a time when the ripple effects of the war in Ukraine are gradually being felt through price volatility and exchange rate swings, the budget purports to provide more support to higher-income groups while keeping the low and middle-income groups at bay, according to the think tank.

With the focus shifting back to development, Kamal's fourth national budget, equivalent to 15.23 per cent of the national GDP, is over 14 per cent higher than the revised outlay for FY22.

However, the budget runs a deficit of Tk 2.44 trillion, 5.5 per cent of the national GDP, much of which will be offset by heavy borrowings from domestic and external sources.

The revenue target has been increased to Tk 4.33 trillion, or 9.8 per cent of GDP. But public expenditure is projected to grow faster than revenue mobilisation, according to CPD.

Ahead of the budget, CPD had emphasised the need for protecting low and limited earners in the country while focusing on inflation management and restoration of macroeconomic stability.

In view of the skyrocketing prices of essentials, CPD had recommended increasing the tax-exempt threshold by Tk 50,000 to Tk 350,000 in order to provide some respite to general citizens but the ceiling remains unchanged, said Fahmida Khatun, executive director of the think-tank.

CPD also proposed to increase the highest personal income tax rate, applicable for top earners, from 25 per cent to 30 per cent in FY23 to promote tax justice and provide an additional source of revenue. Failure to do so was seen as a missed opportunity to introduce more progressive tax measures by the organisation.

The budget did not offer any significant respite through fiscal measures from the inflationary pressure originating from high import prices and the significant depreciation of the taka, particularly as far as the low-income people were concerned, according to CPD.

There was also no strong move to reduce the import duty of essential commodities to signal a lessening of imported inflation burden on low- and fixed-income groups.

The think-tank was highly critical of the proposal in the budget to accord special tax treatment in respect of undisclosed offshore assets to bring the money spent abroad with 15 to 6 percent tax to Bangladesh is not morally acceptable, not economically reasonable and cannot be politically acceptable.

According to the proposed provision, no authority, including the income tax authority, will raise any question as to the source of any asset located abroad if a taxpayer pays tax on such assets, CPD noted.

Such an initiative is ethically unacceptable, will discourage honest taxpayers, and is unlikely to generate the intended revenue, said Prof Mustafizur Rahman, distinguished fellow at CPD.

"In the new budget, the actual allocation for the social security sector, excluding government pensions and various government subsidies, has actually come down by Tk 3 billion.

"Instead of prioritising initiatives and measures to keep the inflationary pressure tolerable, the budget focuses more on a certain section of people, especially those who have taken money out of the country in violation of the law."

The proposed measures for the whitening of capital flight are not morally acceptable or politically wise, according to him.

CPD has always opposed such a move, he said, adding, "Now is the time to oppose it more vehemently."

The organisation did, however, laud the budget proposal for identifying contexts and challenges better, expressing accountability by delineating the progress of past promises, the continuation of fiscal measures to protect domestic industries and its relatively less election-focused nature.

But in light of its current structure and proposed measures, the budget appears to be insufficient in terms of needed measures, incomplete in terms of outlining strategies and inadequate in terms of addressing the present macroeconomic challenges, it concluded.