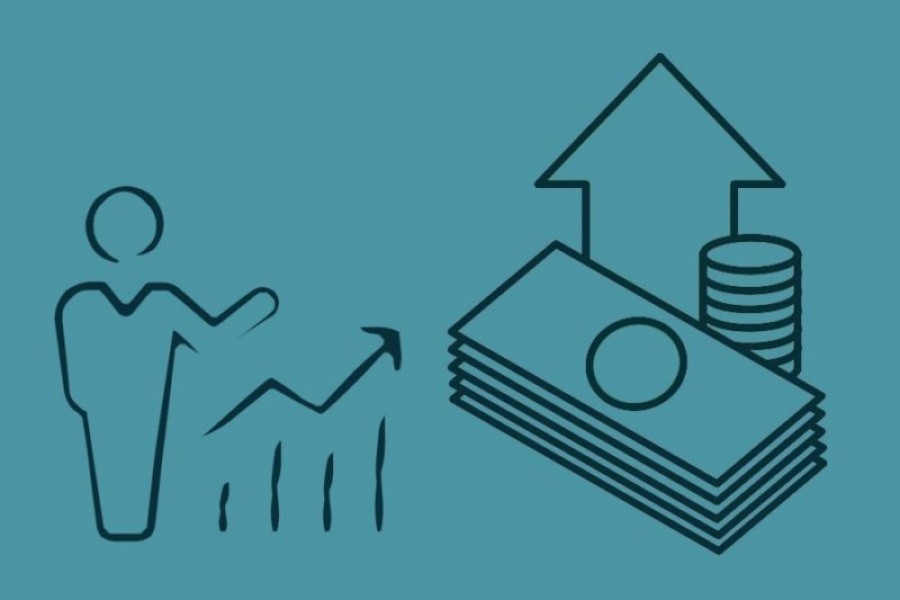 Bangladesh began 2019 with things looking up on the economic front coupled with political stability after vote, but concerns have blunted it at the end of the year.

The pace gathered in the past few years is suddenly lost as almost all indexes bar remittances have slipped into the negative territory.

Export earnings have dipped, revenue collection decreased, inflation is on the rise, import has also dropped, putting the foreign currency reserves under pressure.

Investment has dried up with around Tk 2.5 trillion in default loans sinking the banking sector while the stock market is struggling to turn around from a propensity of diving.

Bangladesh’s GDP, however, saw a robust 8.15 per cent growth in the last financial year, leading the government to set a target of 8.2 per cent growth for fiscal 2019-20.

But, the question, as to whether that growth target can be met, remains at the end of the year.

Researcher Ahsan H Mansur is not so optimistic.

It would be “very difficult” to achieve the target in the remaining six months of the fiscal year after languishing for the first half in a “very bad” shape, the executive director of Policy Research Institute said.

“Our economy is really in trouble. It’s very weak now after going from strength to strength in the past few years. The weakness is getting bigger with every passing days,” he said.

Why so? Mansur, who is also chairman of BRAC Bank, thinks that the “complacency” over the achievements of the past few years is one of the reasons behind the downturn.

“We didn’t provide the economy with the medication it needed to perform well. It means we didn’t bring the reforms that were needed in a decisive manner. Instead, some controversial decisions have worsened the banking sector,” he said.

And the feeble condition of the banking sector made the entire economy “weaker”, Mansur believes.

Export earnings failed to make a turnaround in November, missing the target by 18 per cent and dropping for the fourth month, leaving businesses and analysts worried.

Entrepreneurs of the apparel sector, which contributes most, more than 80 per cent, to Bangladesh’s export earnings, have called for government help as they fear the “negative trend” will continue.

Rubana Huq, who heads the association of entrepreneurs of the largest exporting sector readymade garment, has described the situation as deteriorating from “very bad” to “truly very bad”.

The readymade garment sector took such a big hit that over 60 small and medium factories have been shut, leaving around 30,000 workers jobless, according to her.

Rubana has demanded separate taka-dollar exchange rate for the sector and cash incentive. “And these must be done quickly,” she had said, bdnews24.com reports.

Mansur thinks a recession in Europe, the key market of Bangladesh’s products, and a rise in production costs against low prices offered by the foreign buyers have caused the drop in export.

He advises devaluation of taka against US dollar so that the exporters can remain competitive.

But finance minister AHM Mustafa Kamal said there was no scope of devaluing taka against US dollar.

The government would give intensives to specific sectors instead to ride over the situation, he told reporters on Dec 18.

“We have given intensives to the readymade garment sector to increase exports. We will give more if necessary,” he had said.

But it started falling in August, with the government targeting $45.5 billion exports for 2019-20 fiscal year.

Besides the fall in exports, Bangladesh suffered a drop in imports as well, leading the trade deficit to widen to $5.62 billion in the first four months of the current fiscal year from a little over $5.324 billion in the July-October period last year.

And the drop in imports means entrepreneurs were investing less in industries. Capital machinery imports in the first four months of the fiscal year dropped 10 per cent, fuel oil 15 per cent and industrial raw materials around 20 per cent.

Overall deficit in the balance of payments in July-October period this year stood at $229 million, which was $444 million in the same period last year.

The BoP deficit came despite starting the year with a surplus of $240 million.

Good news only in remittance

The Bangladeshis living abroad have continued to contribute to the economy by remitting foreign currencies.

The remittance received by Bangladesh in the first five months of the fiscal year was $7.71 billion, up by 22.66 per cent year-on-year.

The 2.0 per cent intensives on remittance is encouraging the expatriates to send more money, but Mansur reminded that the government is spending a “huge” amount on the intensives.

He suggested exporting skilled manpower instead for a strong remittance base.

Despite the rise in remittance, Bangladesh Bank’s foreign exchange reserves have not increased much. The reserves stood at $32.28 billion on Thursday. They have not crossed the $33-billion mark since 2017.

The spike in prices of onion has driven inflation as well, raising the rate on a point-to-point basis to 6.5 per cent in November from 5.37 per cent in the same month last year, marking a rise above 6.0 per cent for the first time in four years.

In October this year, inflation was 5.47 per cent. Food inflation contributed most in pushing the overall rate. It rose to 6.41 per cent in November from 5.29 per cent in the same month last year.

Onion prices skyrocketed after India stopped export of the kitchen staple to control price hike in its domestic market by the end of September. The prices reached as high as Tk 250 per kg from around Tk 40 in two months.

Inflation in rural areas rose to 6.1 per cent from 4.91 per cent in November year-on-year.

The government has targeted to keep inflation within 5.5 per cent in the current 2019-20 fiscal year.

Revenue collection takes a knock too

The government’s revenue collection in the July-October period was around Tk 651 billion or 4.5 per cent more than the revenue collected in the same period last year.

But it missed the target by around Tk 200 billion.

The government has set a revenue collection target of Tk 2.77 trillion for the 2019-20 fiscal year.

A fall in sales of savings certificates twinned with slow revenue collection have forced the government into heavy borrowing from banks in order to pay expenses, using up the target for the entire fiscal year in only five months.

The government had not borrowed much from the banks in the past few years and even repaid more than what it took in some years.

But things started to change with the National Board of Revenue (NBR) collecting Tk 2.23 trillion after revising down revenue target in the last fiscal year to Tk 2.8 trillion.

To make up the gap, the government borrowed Tk 471.39 billion from the banks from July 01 to December 09 while the target to take bank loans throughout the fiscal year was set at Tk 473.64 billion.

Such borrowings will put the government budget management in risk, Mansur has warned. Moreover, the risk will increase if revenue collection doesn’t increase, he added.

The net sales of savings certificates in the first four months of the fiscal year stood at Tk 55.12 billion, which were Tk 178.29 billion in the same period last year.

The economy is enjoying the fruits of a total absence of political unrest, violent protests, shutdowns, and increase in supplies of power and gas, and ease of traffic congestion on the highway linking capital Dhaka and the port city of Chattogram.

But there is apparently no reflection of these achievements on investment.

Mansur considers it the biggest problem in the economy now. The rise in government borrowings from banks has worsened the flow of credit to the private sector, he offered.

The GDP growth was 5.0 per cent in 2009 after the Awami League returned to power. It has crossed the 8.0 per cent mark in a decade.

But the growth of investment has not been much in proportion to the GDP growth.

“Employment rate won't rise if we can’t increase investment. And creating jobs has become a big challenge for us,” Mansur said.

The government took a raft of measures after the 2010 stock market debacle, but the market has failed to return to normal.

The prices of shares of one-fourth of the listed companies have dropped below the face value.

On Wednesday, the turnover on the Dhaka Stock Exchange was a little over Tk 3.05 billion. The amount had been over Tk 30 billion daily even during the tumultuous days of 2010, or in the beginning of 2019.

Despite different steps by the government and the central bank, the amount of default loans in banks has increased.

The figure of default loans ballooned over Tk 1.16 trillion at the end of September. It accounted for nearly 12 per cent of the total debt disbursed by the banks.

The Bangladesh Bank account of bad loans, however, is questioned by the International Monetary Fund, economists and bankers.

The total amount of bad debts would have been around Tk 2.5 trillion had the central bank counted rescheduled loans, regularised debts, and those frozen in courts.

The IMF in a recent report submitted to the government recommended that the central bank take these debts into account. An IMF team made the report after visiting Bangladesh twice at the invitation of the government to review the state of the banking sector.

Mansur, who had worked with the IMF, said the report appears to have forced the government to take notice.

He thinks a lack of action against those responsible for loan scams led to the situation.

The IMF in the report said the trend of repayment is less among influential and rich businesses, who have connections with the government high-ups.

Bank directors and managers are also behaving “recklessly” as no punishment is meted out for irregularities in loan disbursement while loan defaulters are being defended.