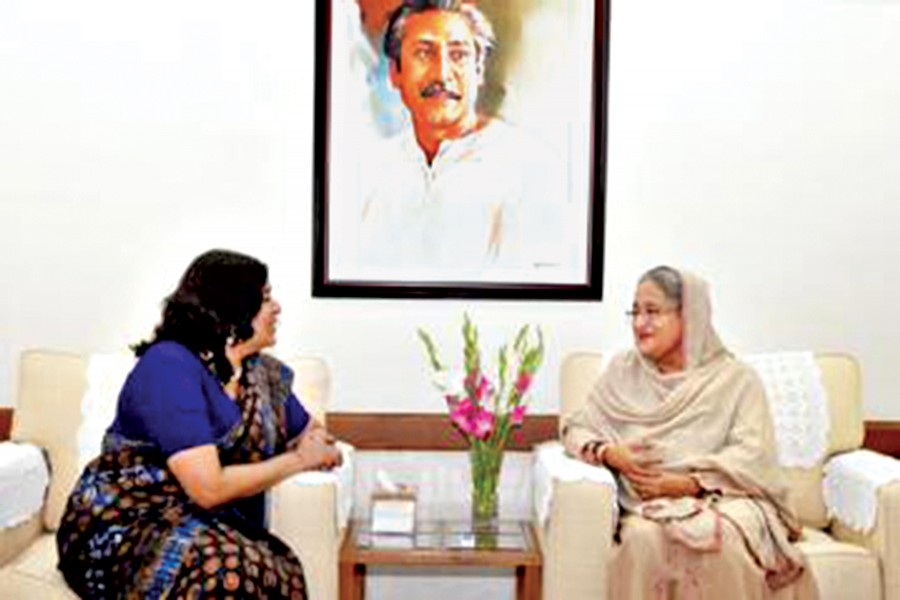 Prime Minister Sheikh Hasina has said her government is encouraging the businesspeople to make more investment for further development of the country.

She said South Asia as a whole is a big market. "We also ask the businessmen to look at South Asia and Southeast Asian market for further progress of the region," she said when Sri Lankan High Commissioner to Bangladesh Yasoja Gunasekera paid a farewell call on her at her official Ganabhaban residence on Sunday, reports BSS. PM's Press Secretary Ihsanul Karim briefed reporters after the meeting.

Describing poverty as the main enemy of South Asia's development, PM Hasina reiterated her call to work together by all countries of the region to root out the poverty.

"Poverty is the main enemy of development of South Asia. So we will have to work together to stamp out the curse of poverty from the region," Ihsanul Karim quoted the PM as saying.

Both, the prime minister and the Sri Lankan high commissioner expressed happiness over the present state of bilateral ties and emphasised on expanding the areas of economic cooperation, Ihsanul Karim told the journalists.

Highlighting various steps of her government to attract investment, the prime minister said the government is encouraging the businesspeople to make more investment for further development of the country.

The Sri Lankan envoy said Bangladesh is a manufacturing hub.

Pointing out her government's strides for establishing 100 economic zones across the country for industrialisation and employment generation, Sheikh Hasina said land has been allocated for China, India and Korean investors in these economic zones.

The prime minister invited the Sri Lankan investors to make investment in these economic zones, saying that they can avail the opportunity by making huge investment.

The PM and the Sri Lankan envoy also put emphasis on joint cooperation in the tourism sector.