Economists suggest ahead of bridge inauguration 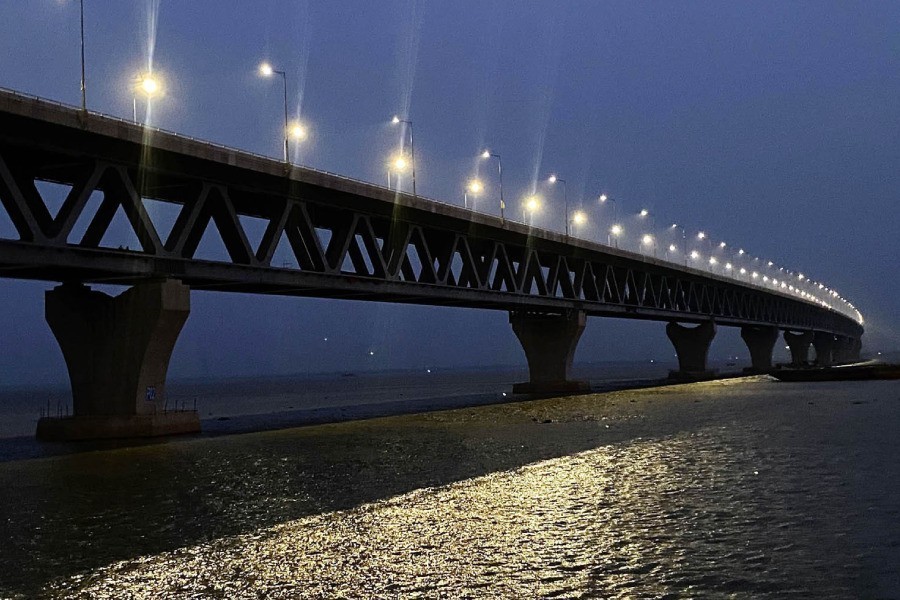 Economists and experts suggest that the government should formulate an integrated Padma-Plus plan to maximise multiple benefits of the Padma Multipurpose Bridge (PMB), set for opening tomorrow.

At a meeting Thursday on economic impacts of the dream bridge they noted that there had been lots of talk about GDP and growth during the opening of the Bangabandhu Bridge over another mighty river, the Jamuna, which connected the northern region to the rest of the country, but expected industrialisation didn't happen for a lack of a holistic planning.

So, the distinguished speakers said, the government should consider the entire southern region an economic zone and go ahead with plans to develop the region so that the bridge not be a mere transport communication between the south and the rest of the country rather be a game changer for the region.

They also said only industries would not make people go there--there must be an entire ecosystem which would also work as decentralization of the country.

The roundtable discussion on 'Padma Bridge and its Economic Impact' was organised by Institute of Chartered Accountants of Bangladesh (ICAB) at its office in Dhaka.

Speaking as chief discussant, Prof M Shamim Z Bosunia, chairman of the panel of experts of the Padma Multipurpose Bridge Authority, said there were lots of challenges - from river training to engineering -in constructing the bridge but the biggest challenge was the decision to build it with self-financing.

"Of all challenges, the biggest one was making the bridge with our own finances as we had to spend around 70 per cent of the cost of the project in foreign currency," he told the meet.

He said on completion of this megaproject, Bangladesh's image in the world would be brightened and it would accelerate the nation's economic growth.

The educationist said a big brigade of 4,000 engineers worked on the project, of them 500 were from Bangladesh.

"Local engineers' capacity has increased and they are now getting job offers from foreign countries," he informed his audience about the spinoff benefit.

"The business and economic centre of China-Shanghai--was built as a non-fence economic zone," he cited to back up his proposal.

Research Director of the Policy Research Institute of Bangladesh Dr MA Raqzzaque said China's development and growth began with development of the coastal belt, and then development came to the centre.

"The Padma Bridge will create this opportunity to develop the entire southern region as a growth centre," he told the meet.

He also believes that Bangladesh could be a centre of the global supply chain with the building of this bridge but there must be a holistic policy approach to materializing the opportunity.

Business Insider Editor Sajjadur Rahman said integrated planning for developing the southern region is vital which must come with the opening of the bridge.

Past president of ICAB Md. Humayun Kabir moderated the roundtable and Sabbir Ahmed presented a keynote paper on the economic impact of the Padma Bridge on the southern region and Bangladesh as well.

Md. Shahadat Hossain, president of ICAB, delivered the address of welcome at the discussion. Among others, journalist Kashem Humayun, Abu Hena Muhib, and ICAB CEO Shubashish Bose spoke at the event.

Ashuganj port rail-link project: BIWTA to use govt fund instead of Indian LoC