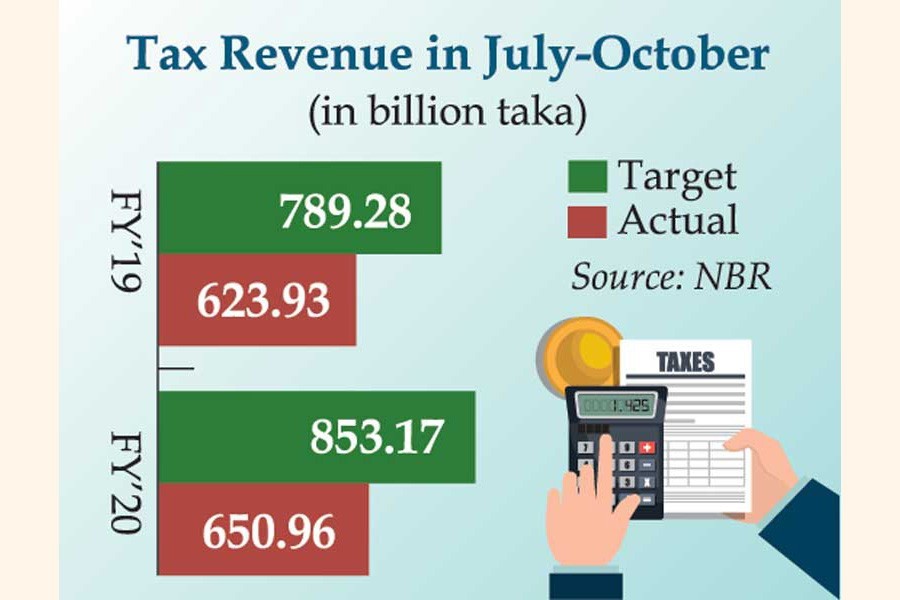 The first four months of the current fiscal year saw a tax revenue shortfall of around Tk 202.20 billion against the target.

However, the volume of tax revenue collection registered a poor 4.33 per cent growth, compared to the same period of the last fiscal.

The National Board of Revenue (NBR) collected Tk 650.96 billion in taxes in July-October period of fiscal year (FY) 2019-20 against its target of Tk 853.17 billion, according to NBR provisional data.

The NBR had collected Tk 623.93 billion tax revenue during the same period of last fiscal.

The income tax wing posted the highest growth of 12.90 per cent while VAT wing 1.79 per cent and the customs wing 0.09 per cent over the corresponding period of last fiscal.

But all of the three wings missed their targets for the July-October period of the current FY.

Such a significant shortfall in tax revenue collection has led to the escalation of the government's bank borrowing to meet its budget deficit.

According to Bangladesh Bank data, the government's net borrowing stood at Tk 426.07 billion as of November 21 of the FY 2019-20, meeting around 90 per cent of the bank borrowing target for this fiscal.

Talking to the FE, a senior official of the NBR said the target for revenue collection has been set in line with an expectation of over 40 per cent growth over the previous year. "The target of Tk 3.25 trillion is an ambitious one and difficult to achieve amid poor tax base and declining trend of import of revenue generating products," he said.

On poor growth of customs revenue collection, the official said the NBR has offered tax exemptions worth Tk 107.51 billion in the last four months for facilitating growth of the manufacturing industries.

Another official of the VAT wing said the collection of VAT slowed down as both businesses and VAT officials are yet to be accustomed with the provisions of the new law.

The official, however, suspected a significant rise of VAT evasion in the current FY due to a cut in authority of the VAT officials in the new law.

The VAT wing collected Tk 247.51 billion revenue in the first four months against its target of Tk 330.10 billion. In the same period last year, the NBR collected VAT worth Tk 243.71 billion.

A field-level income tax official said the income tax wing showed a higher growth compared to that of the other two wings due to mobilisation of higher taxes during the country-wide tax fairs.

In July-October period, the income tax department collected some Tk 196.95 billion taxes against its target of Tk 238.58 billion.