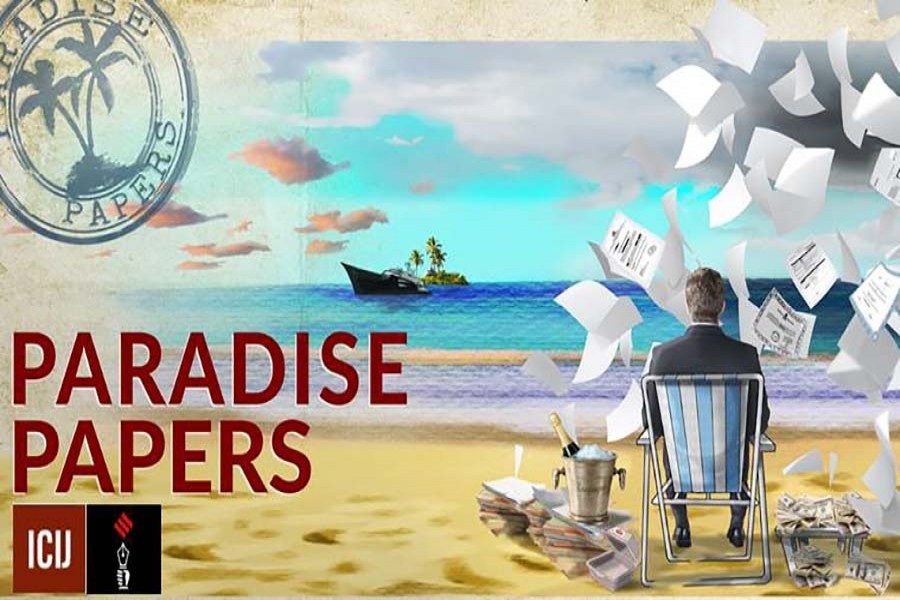 Recent release of the Paradise Papers brings the number of Bangladeshi 'Officers' named in the ICIJ's database of offshore leaks, that commenced with the Panama Papers in 2016, to over 60.

Yet is there any evidence of actual wrongdoing?

'Officers' in the ICIJ database, is the category for individuals named as directors, owners, shareholders or any other capacity, in the offshore companies whose data relating to ownership, management and registration for tax purposes have been leaked through breaches at a series of law firms and legal advisories used to register or act as agents in offshore havens - the latest being Appleby, one of a handful of major international "offshore legal service providers".

The Paradise Papers are some 13.4 million files or records relating to Appleby's dealing with clients that were passed to German newspaper S&uuml;ddeutsche Zeitung and then shared with the International Consortium of Investigative Journalists (ICIJ). The 11 Bangladeshi 'officers' in the Paradise Papers comprise the names of 10 individuals, and 1 firm.

It is important to recognize that being named as an officer in an offshore firm does not mean, in and of itself, that an individual is guilty of impropriety, leave alone criminal activity such as tax evasion. The ICIJ is careful to post the following disclaimer for visitors to its online database:

"There are legitimate uses for offshore companies and trusts. We do not intend to suggest or imply that any people, companies or other entities included in the ICIJ Offshore Leaks Database have broken the law or otherwise acted improperly."

According to a UNB story, an offshore company is a firm registered or incorporated outside the country where it has its main offices and operations, or where its principal investors reside. They are often used for the purpose of financial, legal and taxation benefits.

Rightly or wrongly however, such companies have come to be associated with the financial shenanigans of the rich and famous - most commonly for tax evasion or avoidance, and ranging to money laundering and graft, even terror financing.

Offshore shell companies, that are holding companies registered offshore, can be used to to disguise the ownership of assets. Apart from being tax havens, some offshore jurisdictions do not require that companies disclose the identity of officers and directors and there is no requirement for locally resident directors. This allows for individuals, or corporations for that matter, to control the ownership of assets without being personally identified with such ownership.

By parking their money or assets in such companies, individuals and companies can effectively avoid paying tax on those parts of their wealth and income. Corrupt politicians often receive their kickbacks in the form of ownership of assets, such as company shares, that they then conceal from authorities in their home jurisdictions by exercising their ownership from behind the cover of offshore shell companies.

BNP Vice-Chairman Abdul Awal Mintoo has emerged as the most notable name from Bangladesh in the Paradise Papers. Indeed, he and his family members, including son Tabith Awal, who ran for the Dhaka North City Corporation mayor's post in 2015, make up 5 of the 10 Bangladeshi individuals named as officers in offshore companies that had dealings with Appleby. The focus on Mintoo and his family owes to their forays into politics. As aspirants to public office, politicians are held to a different standard of public disclosure.

Previously, Awami League presidium member Kazi Zafarullah and his family's names appeared in the Panama Papers, as officers of an offshore entity registered in the British Virgin Islands. No other Bangladeshi politician's name is to be found in the ICIJ database.

Mintoo, his wife and three sons' names appear in the Paradise Papers in relation to their interests in NFM Energy Ltd, which was set up in August 1999 with its corporate address matching that of Mintoo's Multimode Group in the capital's Panthapath, but registered in Bermuda. Mintoo and his family members are named variously as president, shareholder, director, etc. There is just one little thing in favour of the association between them and NFM: they hardly tried to hide it.

The Multimode Group's website, till late Saturday evening, had a page on NFM Energy. Various public profiles of Mintoo (and Tabith as well) state his interest in NFM Energy, including one on the website of Pragati Life Insurance, in which he is a director. His LinkedIn profile lists him as managing director of the company (a position he never holds in the Paradise Papers). The company is described as "one of the industry leaders in gas drilling exploration sharing interests and investments in Chevron Bangladesh Ltd. It is engaged in gas exploration of blocks 12, 13 and 14."

This share in Chevron, descended from a share he received in Unocal Bangladesh before Unocal was globally acquired by Chevron, has long been common knowledge in Bangladeshi business circles. It is also seen as the source of Mintoo's strong ties to the US, even though Chevron is said to have bought it back from him.

To the extent that the company never visibly operated on the local scene, and was probably just a vehicle for Mintoo's unusual stake in a foreign investor's local outfit, NFM does subscribe to the template of an offshore shell company. Critics will also point out that despite the visible openness around his ownership of the company, nowhere is it mentioned that NFM is actually registered in Bermuda.

At this stage however, more information would be needed to conclude whether there was any untoward activity Mintoo, Tabith or the rest of the family engaged in through their stake in NFM. The Paradise Papers contain no information relating to fund transfers into and out of NFM, or any of the other firms with Bangladeshi officers, from which an intention to dodge tax or launder money could be inferred.

The Panama Papers triggered two prime ministerial resignations - in Iceland and Pakistan. Both related to non-disclosure of stakes in offshore firms while in public office. But neither Mintoo nor Tabith have actually ever held public office. Tabith lost the mayor's race to Annisul Huq, while Mintoo has never garnered a nomination even. In his public profile on the Multimode website, it is stated that Tabith "sits on the board of all Multimode Group and associate concerns".

In comments to the media on Saturday, Mintoo denied transferring any money to NFM from Bangladesh. As things stand, there is no evidence to suggest tax avoidance, evasion or any dishonest financial gain on the part of Mintoo or his family. Barring an investigation by NBR that is able to shed more light on his dealings, this may be as far as it goes. But the ball is in the NBR's court.